Do you believe Degrassi has jumped the shark? If so name a moment or moments?  For me it was the demise of spinner and jane, and the marriage of the last standing single original dtng characters, spemma. – Mike

Let me preface this by saying that just because Degrassi has jumped the shark at times, it doesn’t mean everything beyond that moment is awful or nonsensical.  The show goes through phases where they’ll be on point, then they’ll suddenly hit a brick wall and vice versa.  Some examples of this:

*The first third of season 7 starting off the year with two strong two-parters (Standing in the Dark, Death or Glory), but then the season was hit or miss after that except for anything involving Darcy’s rape storyline.

*Season 8: a presumed rebuilding year with terrible ratings on CTV.  We saw an uptick in quality in season 9, but Degrassi regained its footing when it refreshed the franchise in season 10.

*Season 12: a pretty damn solid season from beginning to end.  But then our expectations of the show continuing its hot streak crashed and burned with the hot mess that was 13A.  I don’t know about anyone else, but I felt like they got back on track in 13C & D.  14A naturally carried over the momentum from 13D, and 14B will probably have the same carryover feel as this is the longest school year ever.  The next real test for Degrassi is season 15, when the current seniors have graduated and the show has its biggest “reset” since season 10.

Now as far as actual jump the shark moments…. 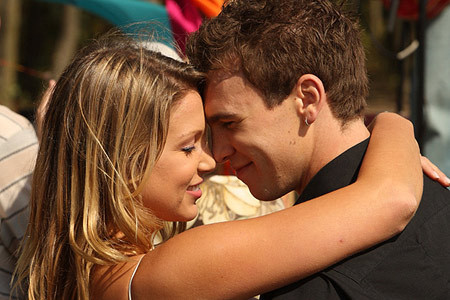 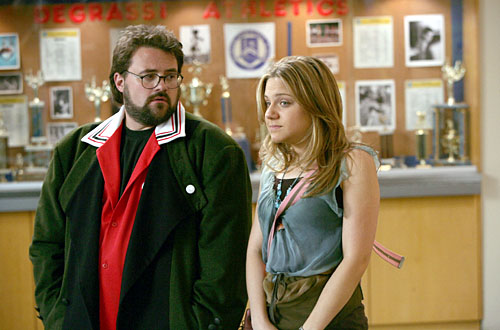 I like Kevin Smith.  There are parts of that season 4 storyline that were fun to watch and he and Jason Mewes delivered fine performances.  Kevin Smith is a hardcore Degrassi fan, so he’s one of us.  But at the same time it felt like the show decided to write an arc around a celebrity who loves the show and include the characters in it as opposed to writing for the characters and then incorporate the celebrity.

I’m not opposed to celebrity appearances on Degrassi.  Last year Lena Dunhum gushed about how much she loves Degrassi, and it’d be cool to see her on the show if done right.  I just want their appearances to make sense and for it to not seem like they’re on the show just to say there’s celebrity on the show.  The Degrassi Goes Hollywood cameos made sense.  Chaz Bono made sense (and even Lauren Toyota in that episode because they were part of celeb judge panel).  Keke Palmer’s character could’ve been played by any generic actress in what turned out to be the first of a couple shitty season 11 relationships for Sav because they ran out of things for him to do.

This may or may not qualify as jumping the shark, but for me it’s one of the most memorable moments of Degrassi…in the worst way possible. Every day I read stories about people and criminals who do the dumbest things, and I sit there wondering how it’s possible that these people can be so stupid.  But even with that said, there’s no way you’re convincing me that a normal person is just walking into a random alley by themselves AT NIGHT with a bunch of sketchy-looking guys they saw on the street and approached to purchase a gun, especially a female in this day and age.  Fiona literally got out of a cab, looked around, spotted a couple of thugs standing around on the street and apparently thought, “Hey these guys look like they might have guns!” before going into an alley with them without hesitation.  Not even Drew’s dumb ass would do something like this!

As much as I love Degrassi, stupid is the only word to describe this scene.  At least with Spemma there’s an understanding that Stefan and company were like “YOLO” since Spinner and Emma were on the way out.  But this Fiona moment makes my head hurt, and it’s one of those things where something far worse could’ve (and probably should’ve) happened to her in that alley; all Fiona wound up with is a bruised face and ego.  Yes, this show is based on characters making stupid choices.  If you’re looking at her character’s big picture, this story played on Fiona’s huge fear of being alone.  But that specific scene had Fiona jumping from desperation to nonsense, and it ruined what was a fantastic storyline up until that point.

Mia The Model In Season 8

Mia Jones was one of the most frustrating characters in the history of Degrassi.  I can get on board with the concept that Mia was an irresponsible mother who was more concerned with wanting to be “a normal teenager” than being a parent.  But then in season 8, Degrassi completely lost its mind and decided she should fuck “Tom Brady” in order to advance her budding modeling career, before eventually leaving Degrassi to become a full-time model in Paris.

At times I’m not even sure why characters on Degrassi have kids.  I understand that they want to present the various angles of teen pregnancy and being a teen parent.  But then I also think about Spike back during Degrassi Junior High; Emma was her universe and wasn’t swept aside for the sake of freeing up her character to do frivolous things.  That’s the perception of what’s happened with characters and children in the TNG universe (excluding AWH).  Pregnancy happens to certain secondary characters (Liberty, Jenna), they become important for a while, give their baby up for adoption and then quietly slide back into their supporting roles.

If Mia was destined to be a crappy mom that’s okay, just focus on showing her be a crappy parent.  Intentional or not, a Bella (Mia) and Rocky (Dallas) of the current Degrassi universe feel like they’re brought in when it’s convenient, but are quickly sent back to the Degrassi black hole so their parents can do things like become a model or chase after the girl of their dreams for multiple seasons.  At least with Dallas there’s been small moments of continuity to remind us that Dallas is a father with a rocky relationship with his kid, no pun intended.  But the existence of Bella felt like it was just as big of a burden for the show to deal with as it was for Mia, hence the sudden act of Mia’s mom offering to take care of Bella starting in Uptown Girl.

What aspect of 14A surprised you most? – Rakath

I’ve beat up on Degrassi enough for one day, so here’s some good news.  This might not be the answer anyone was expecting, but what surprised me the most in 14A is how strong the individual 30-minute episodes were on their own.

When Degrassi rebooted in season 10, it meant they also rebooted the way they’re telling the stories.  We know all of the episodes became two-parters, and episodes were filmed in blocks of four.  The two-parter system worked well during the summer telenovelas because you’re only waiting 24 hours to watch the next episode.  However, when the fall and spring blocks came around, the week-long break in between 30-minute episodes felt massive, especially in between Part 1 and Part 2 episodes.  For me a lot of the Part 1 episodes left you hanging at the end.  There was an issue with Part 1 episodes not really providing much suspense or making me excited to see what happens a week later in Part 2.

In season 13, individual 30-minute episodes might’ve all had their own episode titles, but that 2-parter system still existed. In season 14, however, we see yet another format change:  you’ve got the major storylines established for the entire block, and then they’re broken up and weaved in and out episodes and the A/B/C plot rotations (1401 Miles is the C plot, then becomes the A plot in 1402. And while he’s around and we see his behavior affecting others in 1403-1407, he doesn’t have another plot from his POV until 1408).  We also saw some of the storylines from the perspective of multiple characters (We see Clare’s pregnancy from her POV as well as Drew’s.  Miles’ behavior opened up the door for us to see the POV of Maya, Tristan and Winston.  Degrassi Nudes was seen through both Frankie and Zoe’s POV.).

I’m not really sure how to explain it, but the best way I can is by saying the 30-minute episodes in 14A felt more even week to week, and managed to be fulfilling on their own without needing the next part of an episode for a climax or clarification.