PLOT A SUMMARY: Mia wants this school year to be great, but she hates that she has to spend all of her time taking care of Bella.  Mia’s mom tells her that she will help take care of Bella so that Mia can take full advantage of being a teen this year.  Mia kicks butt at the school fashion show and not only finds romance with Danny, but a chance to be a model.  Unfortunately she finds herself not being very good at modeling and she’s in danger of losing everything.  She gets an audition for a shoot with T-Bombz’s superstar QB Tom Blake, but fails miserably.  Willing to do anything to get the shoot she goes to Tom’s apartment and sleeps with him.

Mia lands the T-Bombz gig.  After a show she lies to Tom and says Bella is her sister, and drags Leia with her to an after party.  In order to impress Tom, Mia makes out with him and other girls, making Leia uncomfortable to the point she leaves.  Mia learns that she had the gig even before she slept with Tom, and feels used.  Even though her shoot went well, Mia loses Danny when he finds out from Leia that she slept with Tom.

Mia’s plot in Uptown Girl is one of those that makes me slam my head against the wall, because it’s so ridiculous.  What has happened to Degrassi and its simplicity?  Themes are overlooked for a silly need to glamourize characters with upgraded wardrobes and levels of fame that are achieved with virtually no effort.

I can’t even tell you the level of frustration I feel when it comes to Mia being a parent.  She’s irresponsible in general, but it’s magnified by the writers desire to reserve Bella as nothing more than a plot device.  Oh hey, we want Mia to be a featured character in Season 8? No problem…we’ll just conveniently pawn off the parenting duties on Mia’s mom and call it a day.  Danny and Mia never felt natural, as Mia seemed to just cling to him just because he was there…oh, and because he’s captain of the football team.  It’s difficult to maintain interest as Mia delves into the world of modeling, swimming in the irony of using her body to get what she wants only to realize she was being used by a silly Tom Brady spinoff.  The best part of this plot is the continued rivalry between Mia and Holly J.  It’s one of the few times where Holly J in “queen bee” mode isn’t annoying; it’s actually fun watching her squirm.  However, when this focus is abandoned it’s easy to forget that this is a plot about a teenager who wants to be a normal high school student, or that this show is supposed to be the most realistic teen drama on television…last time I checked modeling agents wouldn’t waste their time at a random high school fashion show.

PLOT B SUMMARY: Emma, Manny and Liberty are finally at Smithdale.  Emma and Manny are supposed to be roommates, but they aren’t because of a housing mixup.  Emma talks to housing and they are roomies again, but Manny isn’t very thrilled.  Emma also arranges it so that they can be roommates with Liberty and someone named Kelly…who turns out to be a guy.  While Liberty and Manny are busy enjoying college life, Emma feels like she’s being left behind.  Kelly convinces Emma to meet new people and she ends up having a good time, realizing she doesn’t need to rely on hanging out with Manny and Liberty all the time.

Thank God this plot’s theme is pretty good, because it makes up for Miriam McDonald’s lack of anything.  I will forever maintain that ever since Time Stands Still, her acting has declined significantly (exluding a handful of episodes).  She comes off as so mundane that even though Emma’s upset that the girls are out and about without her it feels like she’d say “ehhhh whatever” even if there were no resolution.

And I’m assuming we’ve gotta do a mega job of suspending reality to believe that somehow Emma was able to convince someone to allow all three of them to be roommates together.  But as frustrating as college storylines on this show can be, this is an important one, addressing the difficulties of adjusting to university life.  It’s a new and exciting world that you only get out of it how much you put in.  It’s ironic how Emma wants things to remain the same with all the changes around her, just like how the writers want the show to remain the same by keeping Emma and co. on the show despite having a new crop of fresh faces to build this show around.

PLOT C SUMMARY: Clare meets KC, the new gifted student who she assumes isn’t smart.  He questions why she wears a private school uniform and she says it’s because she doesn’t care what others think about her.  During lunch KC challenges her to show a talent in front of the caf audience.  She sings a hymn and is booed off the stage.  Embarrassed, she decides to eat lunch in the media immersion lab.  Clare says she hangs out with the smart kids because she’s not as popular or as pretty as her sister Darcy, but KC tells her that she’s more than just smart. 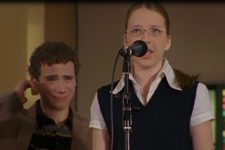 To be honest I thought this was a pretty entertaining way for Degrassi to introduce the new niners.  While Clare was the focus of this plot, we get a lot of insight into Connor without even realizing it.  I love how Clare thought KC was the fish out of water, but in reality she was the fish, especially when she stepped outside the comfort zone of the group.  Though you can see the blooming romance coming from a mile away (because a guy and girl can’t just be friends on this show), at least they’re learning about each other first instead of being mashed together, like say Mia and Danny.