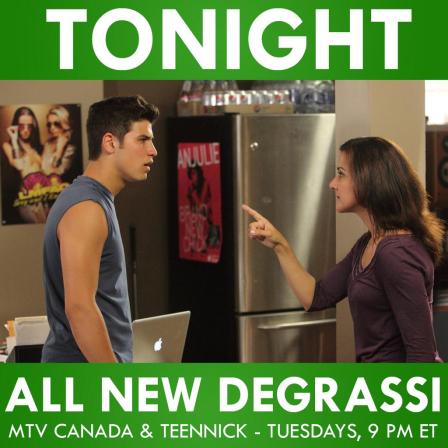 Since Dig Me Out aired, parts of the Degrassi fandom have wasted no time making it known that they’re disgusted with the fact Drew had sex with Zoë.  One thing I’ve wondered though: where was this level of outrage before the two slept together, when their relationship consisted of Drew eating up Zoë’s constant compliments and, more importantly, them jamming their tongues down each other’s throat without discretion? Legally things are tricky here; in the U.S., their ages (Zoë’s 15, Drew’s 18 going on 19) makes this statutory rape, period.  This storyline immediately caused me to research the age-of-consent laws in Canada (and hopefully you’ve done the same), and I was surprised to find out about the close-in-age exemption.  While that could and probably will keep Drew from receiving legal retribution, there’s still the severe stigma of people viewing his actions as morally wrong, or in fangirl terms, “creepy” and “gross.”

While laws define the age in which a person is legally competent to engage in sexual acts, on a moral level why does no one seem as concerned with whether or not a 15 year old is mature enough to handle an emotional relationship with an 18 year old?  FYI:  No, I don’t endorse a relationship with these ages, I simply question why protecting a young girl from the emotional aspect of a “relationship” with a legal adult falls by the wayside in a way.

Why is that, exactly?

All of these questions in my mind come after the responses Degrassi received from this question: 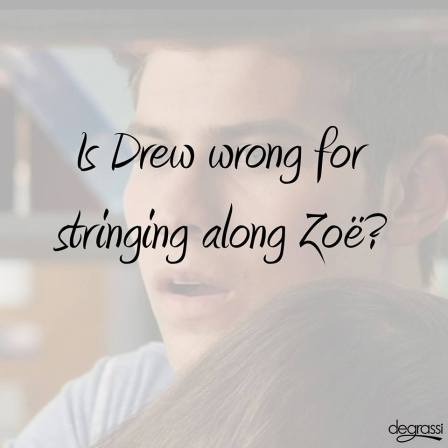 Depending on where you go to read fan reactions, they range anywhere from “No, that bitch Zoë deserved it,” to “Yes, Drew’s just using Zoë for sex.”  I’m in neither camp.

There’s no need to address the comments saying Zoë “deserved” it, because any halfway-logical human being should know that’s nonsense.  However, blanket statements such as “Drew used Zoe for sex” or “Drew had sex with Zoe to make Clare jealous” make me uncomfortable because saying those things with no explanation behind them seem to imply a malicious, almost predatory intent on Drew’s part, which isn’t even remotely true.

I’m not sure what the intentions of the writers were in terms of “Drew wanting to make Clare jealous” in 1317.  By the end of that episode it looked like things were headed that way, but ever since the show has yet to convince me that Drew’s primary motivation for being with Zoë from 1318 on has been to make Clare jealous (I even pointed this out in my review of Better Man).  It could very well play a small part or be the spark that initiated Drew becoming involved with Zoë, but watching scenes with Drew and Zoe when they’re alone shows Drew’s motivation is clearly his sheer lack of self esteem.

Don’t get me wrong:  Drew has been using Zoë.  But I also feel the need to point out that there’s more variations in life than just someone “using” another person for sexual or financial benefit, with the underhanded intent we normally see in TV dramas.  It’s not always devious or intentional, though saying that doesn’t make it right either.  Without fully realizing it, Drew was using her for emotional (she constantly praises him) and physical (making out) comfort, in order to fill whatever void his inadequate mentality has caused; the sex is something that just so happened to occur.

I guess the point of saying all of this is to point out there’s more to look at and analyze in this situation than just the sex itself, or that Zoë is “receiving karma for being a bitch.”  The act of people using others in an emotional capacity, though easy to overlook, can be just as powerful as this storyline has shown.  We’ve witnessed it first hand with Drew, as this plus his inability to be straightforward with Zoë shows how situations can needlessly escalate out of control because you’re too afraid to hurt someone’s feelings and be see as “the bad guy.”

The sad part is one would say Drew should “man up,” and should’ve handled the situation like an adult.  But hell, the older you get, the more you’ll realize the sad fact that not even adults know how to be straightforward with each other.

On a side note…
I wish there were a Degrassi after show where stuff like this could be fleshed out through dialogue between fans, hosts and professionals from various institutions.  13C has had a much heavier feel than the first two blocks, and I keep thinking the content during these first four episodes of the block could lead to GREAT discussion.  And the thing is, we haven’t even gotten to the huge storyline of this block yet (Zoë’s solo storyline, which they’re laying the foundation for now and it will be coming up in the next few episodes).

I’ll post my review of tonight’s episode, Power To The People, on Wednesday.  Promos for next week’s episode (No Surprises) will be posted tonight.