NextDegrassi Promos: Dig Me Out (1319)
Degrassi

ALLI/LEO PLOT REVIEW:  Degrassi’s longest-running arch in season 13 comes to a close in Better Man, and looking back I’m astounded by its progress.  When Alli and Leo first got together, they were pitched as “an epic romance.”  From my perspective the idea of that was laughable, as week after week viewers had to watch a relationship that never came close to being as good as advertised. 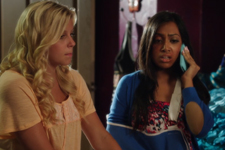 Then something happened: Alli and Leo’s relationship took an unexpected dark turn.  Things escalated to the point where Alli wanted things to work, but could no longer hide the demons that transformed her dream into a nightmare.  It became more than just a story about abuse, it became a heartbreaking look at the psychological damage that can trap someone in an abusive relationship.

And that’s where we are now in Better Man.  Alli can’t bring herself to turn Leo in, so she continues to lie to the detective asking questions about her “mugging.”  Degrassi rarely uses flashbacks, but they’re effective here as Alli recalls her attack while remembering the good and terrible moments from her wedding day.  Jenna knows something isn’t right, and gets Alli to confess that not only did she and Leo get married, but he was also the one who attacked her.  Alli then begs Jenna not to tell anyone, saying she just needs time to think things over.  Meanwhile, Leo has been calling and texting Alli incessantly.  She finally answers the phone and tells Leo she wants their marriage annulled.  “I can’t live without you Alli…I won’t,” are the final words we hear from Leo before Alli hangs up on him.

The next day Alli is ready for a fresh start, returning to Degrassi for the first time since being attacked.  However, she can’t escape Leo, who continues to text her and reveals he’s waiting for her outside of Degrassi.  Jenna and Clare discover Alli hiding in the bathroom, upset that she can’t escape the situation with Leo.  Clare finally learns that Leo was the one who attacked Alli, and despite Alli’s assurance that she can convince Leo to leave on her own, Clare and Jenna tell her they’re calling the police.

For me this episode hinged on how they portrayed Alli’s character, and they succeeded in continuing to make Alli’s behavior uncomfortable to watch.  Throughout the episode she’s never really resolute one way or the other, constantly flipping between viewing her relationship with Leo through rose-colored glasses and cutting Leo off and moving on.  Often characters will figure things out on their own, as if a switch went off and they suddenly see the light, but that doesn’t happen with Alli.  Here it took her friends forcing her to go down the path to end things with Leo once and for all.  At first Jenna reluctantly agrees not to say anything once she finds out the truth, but later just her presence alone pushes Alli to confront Leo during their phone conversation.  Clare, who up until this point wasn’t as aware of Leo’s violent potential as Jenna was, refuses to give Alli any other option besides notifying the police.  It’s a gut-wrenching scene; even until the end Alli still believes she can convince Leo to leave, yet when all is said and done she’s just too mentally exhausted to fight Clare and Jenna on their decision.

With Leo getting arrested and Alli now able to get an annulment, this storyline ends on a strong note.  Where Degrassi gets weird is its tendency to have characters go through a major event, then quickly move onto the next thing as if nothing happened.  The hope here is that whatever lies in store for Alli Bhandari, especially in the romance department (Dallas), the culmination of these last eighteen episodes will continue to play a role in Alli’s life.

MAYA PLOT REVIEW:  Maya tries to apologize to Zig for humiliating him during their Rubber Room presentation, but he rejects her apology and tells her he hates her.  Maya wants to fit in with the other kids in the Rubber Room, so she pays Grace for tips on how to win them over.  Maya dresses up goth style, wearing black clothes, heavy black eyeliner and a nose ring, and acts up during remedial period.

Despite Zig’s disdain for Maya, she continues to hang out with him, Grace and Tiny.  Because she’s a “newbie,” they give her a BB gun and tell her to hang onto it.  Later they all enter an empty classroom and challenge Maya to break a fish tank by shooting it with the gun.  In order to prove she’s one of them she pulls the trigger, but it turns out the gun is a toy.  Maya’s angry upon realizing the Rubber Room kids aren’t the “bad kids” they’re made out to be, and tells them they deserve better than what they allow themselves to get.  The next day, Grace tells Maya she was impressed with how Maya stood up to her, and the two become friends.

The Tenners have been drowning in mediocrity in season 13, but after multiple viewings of Better Man there’s slight improvement in this eighteenth episode.  Degrassi spells out the underlining theme plain as day through Ms. Grell’s lesson about perception, in terms of how people are perceived by one another.  Maya believes everyone in the Rubber Room thinks she’s princess who thinks she’s better than everyone in the class, so she sets out to prove them wrong.  Maya’s wardrobe change is extreme, and it’s surprising how no one seemed to mind how she drastically changed who herself overnight just to please a handful of people (except for Zig, who’s constant “What the hell are you doing?” facial expression seemed on par with how people would normally react).

On the other hand, Maya believed this group were made up of bad kids who skip class and set out to create trouble in their free time, and while the former is true Maya quickly discovers her perception of them is just as incorrect as their view of her.  The two kind of end up canceling each other out and we see a new friendship form between Grace and Maya.  Oddly enough, Grace has been more interesting in the past two episodes than Tristan and Miles in this entire season.  Zig, while present in this episode, offered nothing beyond being rude toward Maya the entire time.  While there was no positive resolution between Maya and Zig, Grace’s random line, “Trust me, you don’t want that Zig as your friend,” is a slick hint that we’re still slowly, but surely on track to find out what’s turned Zig into a complete jerk.

DREW PLOT REVIEW:  The World I Know kind of leads one to believe Drew’s sole mission in life is to make Clare jealous, but for the time being that plays a miniscule role in Better Man.  Drew’s stressed out over prepping for his interview with Mr. Hollingsworth, and when Dallas can’t help him Zoë steps in.  She gives Drew tips on how to present himself, and Zoë’s lesson eventually turns into a makeout session.  Drew does so well in his interview that he gets the Youth Advisor position, and afterward he asks Zoë out on a date.

“What you need is someone with all the time in the world who will adore you.”

Dallas says that to Drew, and like clockwork in walks Zoë Rivas.  It’s nothing new mentioning that Drew has confidence issues, and any behavior perceived as arrogant nowadays is purely a front.  That’s apparent when Drew’s eyes light up as Zoë willingly strokes his ego, calling him a “strong leader” and “handsome.”  That bit of attention gives him the confidence he needs to breeze through his interview with Mr. Hollingsworth, even as they digress by discussing the hickey Drew received during his prep session with Zoë.

In the plot’s final scene, as he and Zoë walk out Drew’s line to Clare, “I guess some girls like sideburns,” is so absurd it’s hilarious.  However, this final scene quietly sets up for what could be a messy situation between Drew and Zoë.  Drew seems genuinely surprised when Zoë tells him she knew he’d get the job, and she also tells him that he’s awesome.  There’s a bit of hesitation from Drew when Zoë asks if them going out to celebrate is a date.  He says yes, but it feels like he’s just going with the flow of the situation as opposed to saying yes because he has feelings for her.  More importantly, Drew’s seems drawn to Zoë simply because she doesn’t hesitate to reassure him that he’s great.