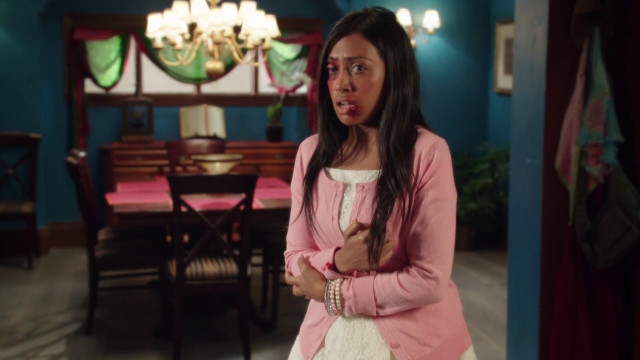 Degrassi’s 13C premiere, The World I Know, delivers a mixed bag of storylines which  leads to a mixed bag of reactions toward the episode.  The days of Alli and Leo being too weak and unwatchable as an episode’s primary plot are behind us, and by the end of this episode their storyline left me legitimately disturbed.  As a guy I can oddly empathize with Drew’s situation.  The only question mark in the bunch is Maya and Zig, whose inconclusive past boils over to the point where they finally clash. 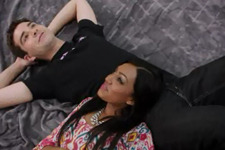 ALLI/LEO PLOT REVIEW:  “We’re just looking out for you, you’re going down a crazy path for a guy.”

That’s what Clare said as she and Jenna pleaded for Alli to reconsider her hasty plans to marry Leo.  Those words could’ve been said to so many Degrassi girls over the course of this show’s history and it would accurately describe them in that moment, yet here in The World I Know those same words carry a much heavier tone.

Leo’s transfer credits didn’t go through, which means he’s going to be deported back to Paris in less than twenty-four hours.  Alli refuses to accept this, as the two spend their last day hanging out together.  Leo calls Alli at midnight to wish her a happy birthday.  Because it’s her 18th birthday, Alli decides she wants to marry Leo so that he’ll be able to legally stay in the country.  This idea doesn’t go over well with Clare and Jenna, who believe Alli’s rushing into things.  Alli and Leo get married at the courthouse, planning to meet with Alli’s parents later for her birthday dinner.

Leo’s excited to share the news with her parents, but Alli tells him her parents can’t find out they’re married.  This leads to an argument where Leo slaps, punches and jerks Alli around in the car until she’s able to escape.  Battered and bruised, Alli returns home and is met by a surprise party that’s being thrown for her by her parents, Clare and Jenna.  Everyone’s horrified by Alli’s condition, and she lies about what happened to her.  She tells them she was mugged, and her father vows to find the person who attacked her. 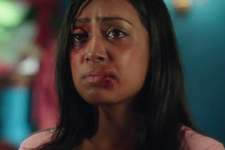 The last time we saw Alli and Leo, he’d promised that he would go to therapy to help with his anger issues.  We can assume that happened and up until this episode things were fine, as Alli swore she would leave him if he ever hit her again.  Being in love is one thing, but in this episode Alli shows she’s become a literal example of the phrase, “Love is blind.”

It’s effectively disturbing how little thought she puts into her actions, and that’s abundantly clear in how quick she is to blow off Clare and Jenna’s warnings to slow down; she’s even willing to proceed with the marriage without any friends or family by her side.  There’s a sense of urgency in Alli, and one knows once that light goes off in your head, your tunnel vision becomes more severe.

It all comes to a head after the wedding, when Alli’s lack of preparation unfortunately clashes with the side of Leo that had been dormant for weeks now.  That absolutely does not justify Leo’s violent actions, which were on display in a scene that brilliantly captured an act of domestic abuse.  Leo punching Alli square in the face is simply jaw dropping, perfectly walking the line between predictable (having Leo just slap her around a bit) and excessive (having Leo beat her into a pulp).  At this point it’s hard to tell whether or not Alli lied about the abuse to her family friends because she was ashamed, was protecting the man she loved or a mix of both.  Either way, this “epic romance” has collapsed to the point where Alli can no longer hide its truth. 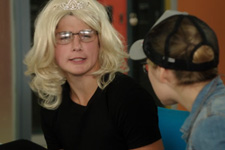 MAYA/ZIG PLOT REVIEW:  Returning to Degrassi after her suspension, Maya finds herself having to spend parts of her days in the remedial room (also known as the “rubber room”).  She’s instantly intimidated by a girl named Grace, who refers to Maya as a princess.  The group of students are assigned a partner project, and Maya winds up with the most unlikely partner: Zig.

Zig is uncooperative with the project that involves them answering interview questions about themselves.  The two must role play as one another and Zig mocks Maya by wearing a blonde wig, wearing a tiara and behaving like a princess.  Maya responds as “Zig” by saying he’s bitter because a girl broke his heart and can’t get over it.  Those words leave Zig speechless, and he angrily walks out of the room.

It’s been quite some time since we’ve had significant interaction between Zig and Maya, dating back to Maya’s post-Cam meltdown at the end of season 12.  Zig basically said that he would wait for Maya until she was ready for a relationship.  Of course he’d be bitter once he found out she started dating someone else, so Zig’s behavior in The World I Know isn’t surprising.

There are times where Degrassi’s 30-minute episode format works well, and others when it makes reviewing plots in individual episodes difficult.  Here, it’s the latter.  There are just so many unanswered questions in terms of Zig, let alone Maya and Zig’s history, and the only portion we receive in this episode is the predictable backlash Maya received for her moving onto someone else romantically.  It also sets up a potential love triangle, with Maya eventually having to explain her connection to Zig.  Miles isn’t worried now, but this is Degrassi after all.  This is only another instance where the storytelling would benefit expansion so that the story being told doesn’t feel so incomplete. 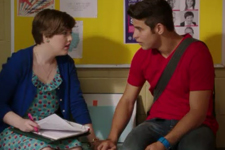 DREW PLOT REVIEW:  On top of being stressed out over his introductory speech for Mr. Hollingsworth at Degrassi’s Speakers Series, Drew also has to “let Clare down easy” after their kiss at the Thanksgiving feast.  Drew, however, is in for a rude awakening when Clare tells him that their kiss was a mistake; she’s not attracted to him and she still loves Eli.  Though he claims to not be romantically interested in Clare, the thought of her not wanting him bothers Drew.  Dallas advises Drew that if he wants Clare to want him, he’s has to flaunt another girl in front of Clare as well as do well at the Speakers Series.  Drew rocks his speech, and impresses Mr. Hollingsworth so much that he offers Drew a position as a youth advisor.

This plot is quite underrated as it addresses Drew’s insecurity from yet another angle.  We’ve seen Drew when he’s arrogant and egotistical, but this is also a guy who over the years has suffered a staggering loss of self confidence.  He’s never had confidence in terms of intelligence or his ability to be successful in the future, and to pile on, his self esteem when it comes to women has taken a massive blow after the breakup with Bianca.

Drew isn’t necessarily conceited for thinking that a girl who kissed him is interested in him.  Yes it’s a little over the top to think she’s in love with him, but teenagers overuse the word “love” anyway.  Logically, it doesn’t make sense that someone would be upset a person they have no romantic feelings for isn’t romantically interested in them…yet oddly enough I can understand the thinking behind it.  The desire for acceptance is always there; people want to be wanted.  A younger version of myself would definitely be bothered to know someone doesn’t “like me” in any capacity, romantic or platonic.  Rejection can be unsettling regardless of where it’s coming from.  Clare referred to him as “shallow” and also criticized his looks which, when it comes down to it, may be the only thing Drew feels as if he has going for himself.  Drew’s constant worry about his ability to make something of himself suggests he firmly knows looks alone won’t get him very far.

And with that said, one can expect to see Drew dragging another girl into the fold in order to make Clare jealous.  That also suggests that Drew might now be lying when he says he doesn’t have some feelings for Clare.  We all tend to want the things that we cant have, right?