Degrassi Episode Review: Dig Me Out

DREW/ZOE PLOT REVIEW: It’s been clear since the beginning that Drew isn’t as invested as Zoë is in whatever you want to call this relationship they’re in, and he’s painted himself into a dangerous corner by the end of Dig Me Out.  For me this storyline is fascinating on a psychological level, as each character’s baggage intertwines and snowballs into something that will inevitably implode on itself. 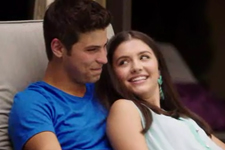 Drew has plans for a poker night with Dallas and the boys until Zoë convinces him to go with her to a party at Miles’ house.  Dallas, Clare and Jenna are convinced Zoë is Drew’s girlfriend, but he insists that the two are just casual and that Zoë’s well aware of that.  Drew and Zoë show up at Miles’ party and get into a mild confrontation with him.  Miles questions why they’re there and the fact Drew and Zoë aren’t on the same page about their relationship.  Drew threatens to tell Miles’ dad if he doesn’t let them stay at the party, and kisses Zoë in front of Miles and Maya.  The entire scene leaves Zoë impressed, and she introduces Drew to her friends.

Later, Miles challenges Drew and Zoë to a water fight.  “I assure you, my boyfriend can beat you at anything, anywhere,” Zoë says.  Drew declines and tells Zoë they need to talk.  He tells her that he never said he was her boyfriend, and that he doesn’t want anything serious after having just gotten out of a long-term relationship.  Zoë reminds Drew that they like each other, and tells him it’s okay if they don’t put labels on things.  The next day Drew’s ready for poker night and Zoë invites herself, but Drew isn’t enthusiastic about it since his friends don’t like her.  She sees this as an opportunity for them to get to know her, so she plans to attend anyway.  Drew apologizes to Dallas, Clare and Connor for having Zoë crash their poker game and they give him the third degree, finding out that he had sex with her.  Drew continues to insists things with Zoë are casual, and Dallas uses the poker game as an opportunity to make Drew suffer by asking Zoë questions about their future.

The following day Drew intends to break up with Zoë, and when he says, “We need to talk,” she knows what he’s doing.  She accuses him of using her for sex, and also tells him that it was her first time.  Drew is absolutely floored by the news that he took her virginity.  He can’t bring himself to break up with her now, so instead he tells her they should change their Facerange statuses to “In a relationship.”

The concept of a lopsided relationship is nothing new.  There are lots of relationships where one person is far more emotionally invested than the other, and you could easily find yourself in one someday.  Though no emotional depth existed, in a twisted way Drew and Zoë were compatible at first, even if only through a type of mutualistic relationship.  In essence they’ve been using each other to fill their own emotional gaps, on top of the fact that Drew’s been attempting, to an extent, to make Clare jealous, and Zoë wanted to impress Miles and Maya.

Week after week we’ve recently been reminded of Drew’s lack of confidence, but we get a more intimate look at Zoë in Dig Me Out.  She tends to carry herself in a confident manner just as her former West Drive character Gatsby Garcia would, and at times reacts viciously, but we see her let her guard down as Drew tries to break up with her.  “I just wanted those jerks to shut up,” say says, referring to Miles and Maya. “They’re so mean to me.  And you like me and you’re great…I wanted them to see that.  It was all for show.”

As I go through life I notice how so many people find it  impossible to be straightforward about how they feel in a romantic relationship, because they don’t want to hurt the other person.  Adults far older than Drew do this and here he is caught in that situation, experiencing first hand how this type of cowardice can escalate into something far worse.  The plot’s shocker is that Drew and Zoë had sex so suddenly.  Even bigger is the issue of the questionable age gap between the two (Drew’s legally an adult, while Zoë is only 15).  Even if a close-in-age exemption were able to save Drew from legal repercussions, its controversy becoming public could devastate Drew’s future, just as this situation he’s created through his patented lack of awareness will emotionally devastate Zoë.

IMOGEN PLOT REVIEW:  Imogen arrives to class and during her presentation Luke makes fun of her chest.  Madam Jean-Aux tells her that class was disrupted because Imogen wasn’t wearing a bra, and suggests Imogen go home and get one.  Horrified, Imogen takes the matter up with Mr. Simpson.  Simpson dismisses her claim and tells her she needs to wear a bra from now on.  In protest, Imogen creates a piece for Degrassi TV where she shows up to school wearing her bra on the outside of her clothing.  The video causes a group of girls at the school to wear their bras the same way, and when Simpson finds out he shuts down Degrassi TV.   Imogen refuses to be silenced, and starts up an Anti-Degrassi Dress Code page on Facerange.

“So, since the boys can’t control themselves, I get punished.”

That basically sums up this storyline, which is irritating to think about in terms of how common a lack of common sense is in real life.  One’s blood is boiling by the end of the plot’s first two scenes, in which Imogen gets singled out in front of the class (by a female teacher nonetheless), Luke receives no reprimand and Imogen’s embarrassment ultimately falls on deaf ears as Simpson tells her to wear a bra from now on.  Degrassi’s Principals have a long history of being hard asses, especially those who were former teachers (first Ms. Hatzilakos and now Simpson).  Simpson’s dismissive behavior toward Imogen during their meeting seems to fall in line with administrators’ rigid behavior in the ridiculous school stories you see in the headlines nowadays.  They’re so hellbent on enforcing rules that all logic flies out of the window.

I’m partly torn on the protest though; the video is great, even if it did “ruffle a little feathers.”  However, I’m not really on board with her tactic of creating the Facerange page, which could go down a slippery slope regarding social media and school districts (which could be an entire issue in itself).  But with Imogen willing to do whatever it takes to fight what she believes in, I’m interested to see how far down she’s truly willing to travel down this rabbit hole.

ALLI PLOT REVIEW: Alli’s back to focusing on her favorite subject, science, but she quickly finds her hopes of being featured in the Regional Science Fair slipping away.  The fruit flies for her experiment have died, and when Connor suggests she get someone to help she insists on doing the project on her own.  However, after realizing how difficult it is to work in the lab on her own with her right arm still in a sling, she asks Jenna to be her lab assistant.

For the time being this is a fairly simple transition plot for Alli.  After being completely caught up in Leo for so long, she seems overly determined to be independent.  She learns that isn’t practical once she slices her finger while trying to cut an apple with one hand.  The show routinely has characters serve as “the voice of reason” for one another, and it’s interesting that they chose Connor for that role in Dig Me Out (If I remember correctly, one of the last times he did that was for Eli in the episode Zombie).

And let’s not forget the not-so-subtle Bhandallas hints the show kept throwing at us.  While I believe Alli at the moment when she says “I’m so over boys,” we know Dallas is still interested in her.  He’s also unaware of her recent ordeal with Leo, and let’s hope that the mention of Leo’s arrest going to trial “next week” is something that comes to fruition.