Zig, Zoë and Maya’s plots end up crossing paths by the end of the episode, so I’m reviewing them together as one storyline.

ZIG RECAP: With his girlfriend traveling to NYC, Zig’s jealous because Jonah is also going on the trip. Maya ignores Zig’s messages so she can focus, leaving Zig to mope around and obsess over the idea that Maya and Jonah are hooking up. Zig storms out of class after seeing a Hastygram pic of Maya and Jonah together, and when Zoë bumps into him Zig drops and breaks his phone. He takes out his anger on Zoë until he realizes she’s also upset over something. The two hang out in the woods where Zig vents his frustration, and the two eventually hook up. Maya returns from NYC and Zig learns she’d been texting him on the way back (he never received them since his phone is broken. Maya plays back a song she created for Zig while she was in NYC as he just looks on in guilt over what he’s done.

ZOE RECAP: Zoë feels kind of awkward about having kissed Grace again, but the two end up making plans to hang out at Grace’s house. Grace’s mom returns and asks Zoë if she wants to spend the night (obviously she says yes).  Grace is worried they won’t be friends anymore if taking things to the next level doesn’t work out, but Zoë assures her that won’t happen and the two hook up. The next day, Grace is standoffish and admits to Zoë that she tried to see how she felt about them being together romantically, but she can’t do it because she’s straight and likes Zig. Heartbroken by the news, Zoë films herself hooking up with Zig in the woods and sends the video to Grace in order to hurt her.

MAYA RECAP: After receiving a message from a music producer after he heard her song “Not Okay,” Maya’s off to NYC with her mom and Jonah to audition for him. With nerves getting the best of her and Zig constantly messaging her, Maya turns off her phone to focus. She performs for the producer, but he tells her that while “Not Okay” is good, the rest of her music isn’t good enough.  After getting rejected, Maya returns home with a gift for Zig: a song she produced for him. 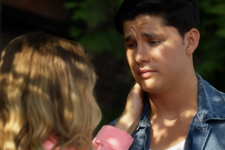 There is no reality, only perception, and boy does that come into play in this wonderfully-intertwined story involving three different plots. Maya’s plot alone is just okay; she goes to NYC, gets rejected and comes home, learning that you don’t become a superstar overnight. However, her trip plays a much bigger role in the context of what’s been going on in Zig Novak’s head since the beginning of this season. “Maya’s going places and I’m not,” Zig tells Zoë. He’s so insecure that he can’t see how in love Maya is with him, and that it doesn’t matter if Jonah harbors romantic feelings because she’d reject them.

I said in my review of #BootyCall that the only way Zig would lose Maya is if he allows his jealousy to get the best of him, and it does when he practically gives up by hooking up with Zoë. The writers give us an extra smack in the face when Zig uses what he learned in #YesMeansYes to stop and get Zoë’s consent before cheating on his girlfriend. 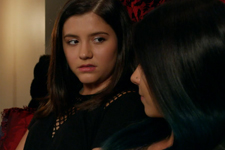 Zoë’s situation is even more complex and heartbreaking.  This girl has really strong feelings for Grace, and she’s never had feelings this strong for anyone else before. Grace echoes that sentiment, saying, “I’ve never felt this close to anyone,” before the two hook up. The doubt Grace seemed to show quite a bit implied she knew there was a chance she wouldn’t reciprocate Zoë’s feelings (because Grace is straight), but she cares so much about Zoë that she was willing to try anyway.  Zoë Rivas has grown over the years, but she still finds herself being viciously vindictive toward anyone who’s slighted her or who she deems a threat. She has every right to be upset because rejection hurts, but it’s not as if Grace did it with malicious intent…sometimes not getting what you want is reality.

There is no reality, only perception. Zig and Zoë allowed their perceptions of their realities to guide them into making stupid decisions. I love that we see the way someone chooses to think about a situation dictates how they react, and that ultimately dictates the outcome.

RECAP: Miles is perplexed after waking up in the woods at Degrassi. Esme tells him about their night of partying, which leaves Miles worried, but he accepts another bag of unknown pills from Esme anyway. The two of them decide to eat at Lola’s Cantina while high and are confronted by Tiny. We learn that Miles sent Lola a dick pic the night before, and when he starts taunting Tiny he trips and lands head first onto the pavement. At the hospital, the doctor informs Miles and his mom that Miles had a slew of drugs in his system.  Miles tells his mom that the pills are the only thing that make him better and he can’t stop.  After being released from the hospital, Miles is enrolled into addiction counseling. He tells Esme he can’t hang out with her anymore, and she tries to guilt him for distancing himself before she finally walks away. 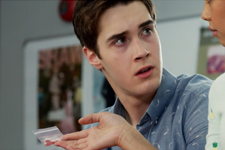 Every season of Degrassi has that one storyline that’s more memorable than the rest; for season 1 of Next Class it’s Miles Hollingsworth hitting rock bottom.  One of the most common complaints from fans over the years is that Degrassi drops plots after a couple of episodes. While that base argument is fairly overblown, rarely do we get such a lengthy look at an ongoing issue for a character.  For three seasons Degrassi has shown us how the existence of Mr. Hollingsworth has taken a toll on Miles’ mental state, with the stakes reaching their highest point in this episode.  Eric Osborne accepts the challenge and exceeds expectations with his emotional performance as Miles finds himself addicted to drugs.

Miles is so desperate to avoid the feelings of anxiety associated with his family that we see him willingly accepting whatever pills Esme gives him.  Her role in Miles’ enabling is scary, especially given how nonchalant she is. “Does it matter?” she asks, when Miles questions what types of pills she’s just given him. She knows exactly what she’s doing, using specific phrasing (“Would you have rather spent the night with mommy? And daddy?” / “You have no friends and a crap family…you’ll come back.”) to try and keep a vulnerable Miles under her thumb.

The revelation of what drugs are in Miles’ system at the hospital is terrifying, because Miles has entered the gateway of drug usage without realizing it. As bad as this may sound, I’m glad that Mrs. Hollingsworth has been terribly clueless to her son’s spiral out of control.  We’re told to reach out to others for help during tough times, but throughout Miles’ arc in Next Class we’ve seen the brutal reality of what happens when people, even those closest to you, are deaf to your pleas.