RECAP: Degrassi’s Gaming Club has won a spot at Regionals, but the team fears they stand no chance because of their outdated computers. Hunter decides to start a crowdfunding campaign to raise money for new hardware and succeeds, but he runs into a problem: the Feminist Club believes the game they play promotes misogyny and violence against women.  At an emergency student council meeting Goldi says the game’s sexualized violence can be triggering to sexual assault victims. Hunter says everything can be a trigger, and while he compares things that could be triggers to him based on his outsider status, he also comments on how Goldi’s hijab could trigger him into thinking she’d blow up the school. Later, Yael stops Hunter as he starts destroying computer equipment and tells him to figure out a way to fix things. Hunter tries to apologize, but talks himself into a corner again when he says there aren’t many female gamers because guys are naturally better at video games. The Gaming Club is shut down, and while his friends are still in his corner the only thing that’s on Hunter’s mind is revenge.

Hunter’s plot in #NotAllMen begins to lay the foundation for Degrassi: Next Class’ most critical storyline. This series venturing into hot-button social issues means reactions will be strong, not just from the characters, but from viewers passionately for or against either side of the debate.  #NotAllMen is about more than just tackling GamerGate, or addressing a real-life situation where a Degrassi actor was caught saying racist things during a video game livestream.  This storyline is a fascinating representation of how people with opposing viewpoints interact with each other, in real life and online.

During the student council meeting, both Goldi and Hunter make valid points.  The trashtalk the gaming club engaged in (“hike up your skirt,” etc.), while extremely tame compared to what I’ve heard people say in online multiplayer, is still unnecessary. It’s true that the game’s violence against the female characters could be triggering to female assault victims. However, what Hunter said about how anything could be a trigger for anyone is also true.

The prevalence of social media has given a public voice to everyone with the swipe of a few keys. At what point though do concerns over triggers turn into coddling, or suppressing anything and everything because someone doesn’t like it? When people are outraged over a damn cup, it’s safe to say that if there’s something happening in the world, no matter how insignificant, you can surely find someone who’s offended by it.

What isn’t okay though is while Hunter gives examples of what could be triggers for him, based on his experience as the guy everyone in that meeting has deemed a loser, is making a stereotypical terrorist comment toward Goldi. He apologizes later and I get what he was trying to say, but the fact he didn’t realize a comment like that said with an aggressive tone would be frowned upon (on top of his awful male vs. female gamer comparison) just points again to his lack of social skills.  Goldi is intelligent, well-spoken and knows how to get her point across clearly.  Hunter’s reactions are fueled with anger; he freaks out after someone won’t donate computer hardware, lashes out at the student council meeting and smashes keyboards afterward.  And because the people in his club are seen as losers at Degrassi, Hunter sees someone trying to take away the one thing they’re good at as a personal attack.

If Hunter were able to communicate his thoughts more effectively he would’ve been able to save the club, even with Goldi unwilling to compromise her stance on the game. However, because he comes across as angry and hostile toward an opposing opinion, something a lot of people do when engaging others online, any great points he made get lost in the fact he’s viewed as a nutjob who can’t control his temper.

There’s a tender moment with the Gamer Club in the final scene when Vijay, Baaz and Yael thank Hunter for sticking up for them. The young gamers use gaming terms to describe real-life situations, with every obstacle being referred to as a “battle.” The downside is with Hunter as their leader, someone who lacks general coping skills, the plan of attack for this battle brings the concept of “destroy your enemy” to life.

RECAP: Zoë’s mom doesn’t want Zoë hanging out with Grace because she doesn’t want people thinking Zoë’s gay.  The news leaves Zoë bummed out and wishing she could talk to her dad. She doesn’t know who he is, but she’s convinced it’s actor David Sutcliffe (Gilmore Girls). Zoë and Grace go to his trailer to find out the truth, and while it turns out he isn’t her father, he does give her advice: live your own life. Zoë feels as if she’s going to be alone because she has no father and she can’t hang out with Grace, but Grace says she’s still there for her and the two kiss.

This is kind of a weird plot, but Degrassi goes back to addressing Zoë Rivas from her early days. When she first came to Degrassi, Zoë was alone and just wanted to fit in.  With her mom being homophobic, it paints Zoë into a difficult corner. She feels like she’s going to be unloved by her mom because of her sexuality as Ms. Rivas also wants Zoë to stop hang around Grace, easily the most-important relationship she’s had since coming to Degrassi.

David Sutcliffe plays himself in this storyline and serves as the voice of reason. “It’s your life not hers,” he tells Zoë. “And you can only ever make yourself happy.” As we saw with Shay in #NotOkay, not everyone is bold enough to go against their parents, but the fact Zoë is willing to be vulnerable and take risks shows she’s still growing.

RECAP: Jonah asks Frankie to volunteer at a teen addiction center and she agrees. However, Frankie also has Shay begging her to accompany her, Tiny and Lola to The Dot so Shay doesn’t have to sit alone through the torture of watching Tiny and Lola together. At The Dot, Frankie gets impatient and says its silly she’s stuck in Shay’s drama and not helping Jonah. Shay strikes back and says it’s the least Frankie could do after having to sit through Frankie mourning over her breakup with Winston over the past month. When Frankie shows up to volunteer after the event is over, Jonah’s angry with her, and tells her that she’s still miserable because she wants to be. When Frankie goes home she unexpectedly runs into Winston and she ends up spilling her feelings to him. She wishes her life could go back to the way things were last year, and Winston agrees before walking away. 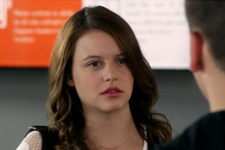 I didn’t initially like this plot all that much because the Shay/Lola drama seems to cut into the Frankie/Jonah stuff. However, trying to look at it from an alternate angle poses the question, “What if that’s the point?”

My frustration with what’s happening here is parallel to the frustration Frankie’s dealing with in this situation.  In this episode, Frankie is literally torn between trying to support Shay and helping Jonah. From an emotional standpoint she also feels stuck in the middle between who she’s becoming and who everyone wants her to be.

Both Shay and Jonah make remarks about how miserable Frankie has been. Shay pointed out Frankie’s been mourning her breakup with Winston for a month, leading into Jonah’s comment about Frankie being addicted to the drama of misery. The situation where Franie chooses to help Shay over Jonah shows that Frankie keeps talking about how she’s not the same, but she’s also not trying to move forward either.

Frankie’s pain is surely real, but Jonah’s angry because Frankie’s afforded the luxury of wallowing in her self pity, while the teens at the addiction center are eager to (and must) change for the better. The conversation with Winston finally presents Frankie with two clear choices: go back to the way things were, or finally move on.