New year, new look, same old Degrassi.  The franchise that’s been around longer than most of its current fans have been alive returns in its newest incarnation known as Next Class.  The specific goal of this show is to target the current, tech-heavy generation Z, and that’s apparent in every frame.

Despite airing on Family Channel in Canada, the chains have been loosened on the show’s storytelling. The move has breathed new life into the writers in this first episode, #BootyCall.

RECAP: Tristan finds himself battling against Miles for student body president.  While Tristan is still bitter over their breakup, Miles admits he’s not over Tristan and the two make out at Miles’ election party.  Tristan falls for Miles all over again until he catches Miles flirting with a girl to get her vote. Miles and Tristan end up fighting during the debate, while Goldi can’t get a word in edgewise.  Miles wins the election, but Simpson strips it from him after learning Miles broke the election’s spending rules with the party. As Tristan becomes the new president, Miles angrily vows to destroy him for snitching.

Triles once again demonstrates that they’re in no place emotionally to be together romantically.  In this episode, both characters fall back into their respective character pitfalls: Tristan falls in love with anyone who remotely looks at him sideways, and Miles is reminiscent of the one thing he hates…his father.

The Tristan thing might be a very *slight* exaggeration, but what’s fantastic about Tris here is Degrassi shows us just how easy it is to fall back into old feelings, especially when it comes to a former flame. From the outside we wonder why people can’t seem to leave or get over someone from a crappy relationship, but from the inside it’s a dangerously easy trap to fall back into.

Miles’ perspective is a little more complex, though.  His campaign slogan (“I play for both teams”) is hilarious. He’s running for president because he wants Degrassi “to have something for everyone,” and for something to go right in his life for once. I believe him when he says he isn’t over Tristan, not once, but twice (Triles may have been built on comfort, but it’s plausible that real feelings developed to some extent). However, during the election Miles a spitting image of his dad, a politician, touting inclusion and change everyone can believe in while using his money and popularity to influence votes.  Regardless of his motives Miles is still the same person, still following in the footsteps of the person who’s responsible for his deep emotional scars.

And just like that, we see the issues of Miles and Tristan bleeding all over the debate stage for all of Degrassi to see.  Over the years Degrassi has received endless grief from us fans for the show’s incessant relationship drama, but there’s no denying how reflective it is to watch interactions between people devolve into butthurt mudslinging. Goldi is amazing in her debut as she points out that what should matter gets pushed aside in exchange for petty bullshit, an occurrence that coincidentally happens too often in arguments for or against one of Degrassi’s most-controversial couples.

RECAP: Maya has a big audition, but Zig’s starting to get frustrated because of the lack of time they spend together. Not only is Maya busy with her music, they only have one class together this semester.  Zig gets jealous when he sees Maya auditioning Jonah to play guitar because Zig assumed he’d be the one performing with her instead. After a discussion with Grace, Maya tells Zig that music is more important to her than him right now.

The great thing about Degrassi storylines is you don’t have to be in a character’s exact situation to relate. Often times it’s the feelings that are more relatable than anything else, and having experienced both the mindsets of Maya and Zig, I can assure you they’re both stressful.

At the heart of this situation, I get where Zig’s coming from. Things will start going south eventually, but here he’s just trying to spend time with his girlfriend. Things are positioned to where there isn’t a lot of time for them spend with each other, so naturally one would start worrying about whether or not the dynamics of the relationship are changing.  It’s human nature for people to want to feel important, and feel included in the future of those close to them. Yes, Zig absolutely should be more supportive of his girlfriend’s dream, but in this episode I understand the core of Zig’s concern: people make time for the people and things they consider important, and he feels like he’s being cut out.

Zig’s issue isn’t his feelings, however, it’s how he chooses to deal with them, and that’s almost always the case with how social situations spiral out of control. If you remember how he interacted with Cam Saunders in season 12 and Miles in season 13, he doesn’t take kindly to things standing in the way of him being with Maya. Red flags fly the second Zig lays eyes on Jonah and starts trying to insert himself into Maya’s band. The only way he’s actually going to lose Maya is if his jealous behavior causes him to transform into a self-destructive flaming ball of stupidity.

Meanwhile, Maya is doing what Degrassi fans have been begging a female character to do for ages: she has a priority in life bigger than boys.  Zig doesn’t understand that just because music is Maya’s priority, it doesn’t mean she thinks any less of him, even if it feels that way. She clearly loves him, but there’s only so much time to go around, and it’s not fair for someone to have to give up their dreams for the sake of a relationship.

I can’t believe that two characters actually COMMUNICATED their feelings to each other! Maya lays down the law by telling Zig that music is what’s most important to her right now, and he responds by telling her that he feels like she doesn’t want to be around him anymore. I was also surprised that Zig mentioned sex.  In season 14, Mike Dallas expressed the sentiment that sex equals love, and while it can be an expression of love, the writers add another layer with Zaya no longer having sex after having done it at least once. Those types of discussions don’t happen too often on this show even though sex can be a big part of relationships, and a lack of sex can be become a huge issue in marriages.

Not to say that Zaya is anywhere near that level of commitment, but for the time being Degrassi forgoes the dramatic blowup and breakup to give us a look at the actual ebb and flow of a relationship.

RECAP: Shay has a crush on Tiny, but Lola convinces Shay that Tiny wouldn’t be into her because she has a small butt.  After taking a photoshopped butt selfie, Shay sends it to Lola who uploads it to social media. At Miles’ party Tiny asks Shay to be her lab partner, but now she’s worried he only asked her because of the butt photo.  This leads to Shay stuffing cotton in the back of her pants. A lab accident forces her to take her pants off in front of the entire class, but she demands Tiny turn away and not look. It turns out Tiny never saw the butt photo to begin with, and it’s clear he’s interested in Shay.

Let’s get the “bad” out of the way: I wasn’t really into the climax of the butt padding story.  Cheese is my middle name, but for some reason I wasn’t feeling Shay dropping her pants in the middle of class as much as I’d expected.

The good news is that Shiny melts my heart into a puddle of chocolatey goodness, and for a “C” plot this story is full of interesting points to dissect.

I could write an entire essay about Lola, but in Next Class she’s taken on the role of someone whose existence revolves around social media. She takes her cues primarily from what others post online (assuming Tiny only likes girls with butts), has no concept of privacy (posts Shay’s photo without permission) and believes she’s more popular/important than she really is (outraged to learn Tiny doesn’t follow her online). In other words, she is us. 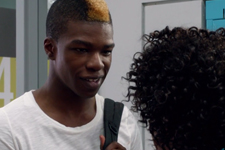 “There is no reality, only perception,” is a quote to remember, because I have a feeling it’ll apply quite a bit in this social media era of Next Class.  Shay allows Lola to convince her that Tiny is thinking a certain way, but it turns out he doesn’t even know what the hell is going on.  I like how Degrassi tackles body image here in a simple way, a reminder that there are varying levels of self-conscious behavior beyond the extremes.

One thing I hope people notice is how Degrassi’s writers are making some pretty slick moves in Next Class. Shay starts off the episode as the one making assumptions about Tiny’s intelligence based on his looks, only to believe Tiny is assuming things about her based on her looks.  The writers also casually foreshadowed Frankie’s future storyline through Shay’s plot (they did the same for Zoë/Grace through the Triles plot).  Not a bad start for a new series…one could say the future looks “Shiny” for Next Class.

What in the hell is the Stefan Meter?

Grades are so…..last generation. What better way to rate the episodes and participate in our favorite activity (making fun of Stefan) than the Stefan Meter?

It’s really simple…the more Stefans there are, the higher the rating. And his mood changes depending on the rating. There are also partial ratings. Just a rule of thumb: 3 Stefans is middle of the road (the plot was just “okay” or it’s a generic filler/setup plot). 2.5 starts to lean negative. Anything 3.5 and above is good.