Degrassi Recap 1407: I’ll Be Missing You

It’s Zoë’s birthday, and she receives a mysterious package from a stranger:  a doll programmed to say “I know about Degrassi nudes.”  Not knowing who it’s from, Zoë becomes paranoid.  She also ends up receiving a text message from a blocked number saying they’ll reveal the Degrassi Nudes scheme publicly unless Zoë quits power cheer.  She prepares to resign by lying and telling the other girls she needs to quit power cheer because she was offered a movie role, but before they can do that they surprise her with a cake and personal bracelet.  Zoë can’t bring herself to quit, so she ends up telling Grace to shut down Degrassi Nudes.  Afterward, Zoë informs the squad that she’s shut down Degrassi Nudes for good, but everyone on the squad receives a text message from the same anonymous stranger blackmailing Zoë.  The person threatens to reveal power cheer is behind Degrassi Nudes unless the girls kick Zoë off the squad.

GRADE: B
QUICK REVIEW: This is one of those conflicting scenarios where Zoë did questionable things with good intentions (in her mind), but now someone’s threatening to take away the best thing she’s gained from it (having REAL friends).  The PLL-style setup of someone anonymously blackmailing Zoë is amusing, especially the creepy doll.  She lost her acting career.  She lost a sense of normalcy after her sexual assault, because people continued to treat her like a victim.  It was great to see a multi-dimensional character like Zoë legitimately feel accepted in the moment, because all she’s ever wanted since coming to Degrassi is to fit in.  However, Zoë seems to think she can do “whatever it takes” to get what she wants, and it looks like she’s poised to learn another difficult lesson about how quickly one can lose it all. 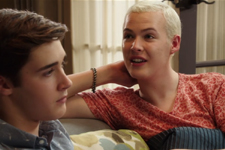 Winston believes Miles hasn’t been himself, and tells Tristan that Miles changed when the two of them started hanging out.  Tristan confronts Miles about it, and Miles tells Tristan that he isn’t the problem…as a matter of fact, Miles assures Tristan he has no problem at all.

When Miles doesn’t show up to class for their presentation, Tristan shows up at his house to find Miles smoking weed in his pool.  Tristan believes Miles has a weed addiction, and Winston suggests they stage an intervention.

GRADE: C
QUICK REVIEW: Maybe I missed something, but since when did Miles basically develop a weed addiction? It feels like they needed a tangible angle to have Tristan finally join the “Something’s Wrong With Miles” Club, because Miles just moping around ALL OF THE TIME isn’t noticeable enough. Tristan has been off in his own Miles-esque universe this season, ignoring every potential warning sign that something is wrong.  That’s his character’s major flaw though, especially when it comes to romance; Tristan can be so blinded by “love” that he can’t see what’s happening right in front of his face.  His character has been useless so far this season, and besides the simple fact he and everyone else finally realize Miles is spiraling out of control, it’s hard to be engaged with Tristan’s POV when you stack it next to an emotionally gripping one like Maya’s.  With that said, I’m expecting the actual intervention in the next episode to be better.

The Beginning Of The End For Bhandallas?

Alli reveals she’s been accepted into the University of Cambridge.  Dallas is upset she didn’t tell him she was accepted to a school so far away, and Alli says they need to talk soon about their future.  Believing that Alli will probably break up with him, Dallas decides to plan a date to wow her.  Shay overhears his plans and tells him they’re dumb, saying he needs to be more romantic.  Dallas plans a romantic evening involving dinner and staying overnight at a hotel, but Alli says no because she doesn’t want to have sex with him.  Dallas assumes Alli won’t sleep with him because she’s already planning on breaking up with him, and he yells at Shay by calling her date idea dumb.  Shay tells Dallas he shouldn’t be with someone who doesn’t want him, and reveals she has a crush on him.  As she goes in to kiss him, Alli walks in.  Dallas continues to think Alli doesn’t want him and doesn’t want a committed relationship with him that’s long distance.  Alli tells she doesn’t want to sleep with him because of how badly it’s messed up her past relationships…also, she wants them to build a future together that might include him moving overseas with her.

GRADE: A-
QUICK REVIEW: Sex happens on Degrassi, but rarely are the complexities of it fleshed out or discussed between characters on screen without massive consequences!  Dallas was in full panic mode, and honestly I would be too if someone I was seeing was suddenly offered an opportunity that meant moving away.  It’s a scary thought that someone you care about will go off to live a life elsewhere, and could possibly forget you.  Dallas is a good guy, but there was almost a vibe of him expecting Alli to prove her love for him by having sex with him.  If the two did it, it would be some kind of confirmation in his mind that she still has feelings for him (which was ridiculous thinking on his part).  The best part of this plot comes from Alli’s perspective:  she firmly puts Dallas in his place, not only calling him out on his one-track mind, but also reminding him that when it comes down to her personal decision to have sex, it’s about her and no one else.