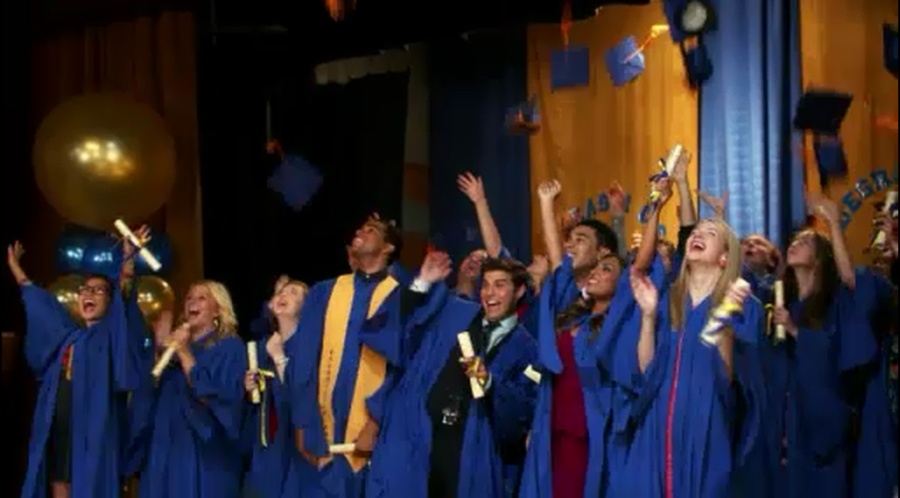 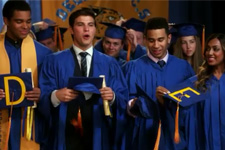 Drew’s feeling left out because Alli’s planning the perfect prom for Clare, so she doesn’t want Drew around to ruin it.  Dallas is able to convince Alli that Drew can come with their group to prom, but only if he has a date: Becky.  Drew’s promposal happens during the seniors’ final exam and he uses the “Captain Who” set, but it goes awry and Becky also says no.  Ms. Pill isn’t amused and punishes Drew by not allowing him to attend prom.  Drew’s upset (especially with Dallas) because they won’t choose an alternate way to have prom that involves him.  Meanwhile, prom hits a snag when the seniors realize Dallas booked the boat for the wrong date.

Drew’s still bitter and refuses to help, but his mom smacks some sense into him, literally.  Drew teams up with Dallas to create a “Starry Night” prom at The Dot.  Ms. Pill is angry Drew snuck into Degrassi to steal the decorations needed for the makeshift prom, and she doesn’t allow him to walk with his classmates.  The seniors graduate and when it comes time to toss their caps, their caps spell out “We <3 Drew,” and Ms. Pill allows Drew to walk.

QUICK GRADE: B+
QUICK REVIEW: Drew was technically the main plot, but there were so many little things happening that I’ll also include thoughts on those as well.  The writers were clearly intent on making a lot of these characters’ stories come full circle.  Connor’s promposal mimicked the first date he and Jenna went on back in season 12’s Ray of Light.  He’s going to Caltech for applied physics and aerospace, while Jenna will pretty much be right down the road working on her degree in sound engineering (and they’re endgame).  They took the time acknowledge Adam would’ve graduated this year.  Eli references the “pretty eyes” moment from the first time he and Clare ever met.  Dallas, who once said he wasn’t NHL material, is off to play hockey in Japan (and he and Alli are endgame).  Clare’s diary is ripe with stories about Alli and Jenna’s romantic endeavors (Johnny DiMarco/KC), as well as  eye-opening commentary about her own life.

When we get to Drew Torres, who’s been a total douche in 14B, we see less of the “jerk for no reason” Drew and something that’s more consistent with his character’s fears over the years.  He’s always been the guy who thinks he’s too dumb to accomplish anything, afraid he’ll be forgotten while everyone goes off to live their successful lives.  “I didn’t want to be alone on prom night too,” he tells Becky.  He wants to be a part of these final moments with these people before they literally scatter across the world.

This group of seniors varies in how long each character has been on the show, but it still doesn’t get any easier to say goodbye to any of them.  They’ve graduated and are now going their separate ways, and like an overwhelming majority of the characters who’ve gone to Degrassi since the 1980’s, this is the last we’ll see of their journeys.  From our point of view, as people so close to these characters that the fandom itself is basically a student at Degrassi, never seeing them again is one of the most realistic high school experiences there is.

With all of her friends’ futures all perfectly planned out, Clare genuinely has no idea what she wants to do with her life. Eli offers for her to come to New York and live with him, and even gets down on one knee to ask her, but she declines.  Clare says she doesn’t want to be the girl who just follows her boyfriend around.  Eli’s not sure if they can handle doing another long-distance relationship and questions whether or not Clare really wants to be with him, and she tells him she needs to figure out what she wants.

Clare ultimately decides not to live with Eli in New York; instead, she plans to take a gap year to figure out what she wants to do while maintaining a long-distance relationship with Eli.

QUICK GRADE: A
QUICK REVIEW:  I mentioned earlier about stories coming full circle, and none was bigger than Clare Edwards’, a cornerstone of this show for a solid seven seasons whether you like it or not.  For me, there were two really important parts to this story:  Clare’s diary, and her conversation with Simpson.  “I’ll never let a guy get in the way of my dreams,” Alli says, reading aloud from a young Clare’s diary.  That sentiment echoes one of the most-memorable Clare quotes in Degrassi history: “Well it’s a good thing I’m here for school and not for boys,” she said, way back in season 8.

In this episode, she reiterates the fact that moving forward without a plan is terrifying.  There’s harmony in Clare and Snake, the two longest-running characters on Degrassi who come from generations nearly two decades apart, still sharing a similar situation.  Simpson’s character has been around so long there was never any thought put into the idea that he’d actually leave the show one day.  Even as an adult, put on indefinite leave, Simpson finds an opportunity to do something (build a school in Haiti) after things in his life don’t go according to plan.  The Clare Edwards we knew from her early days, the one who also had a plan and knew where her life was headed, no longer exists.  She finally comes to accept that with her choice to take a gap year, because it’s okay to take time to figure out where you’re going in life. 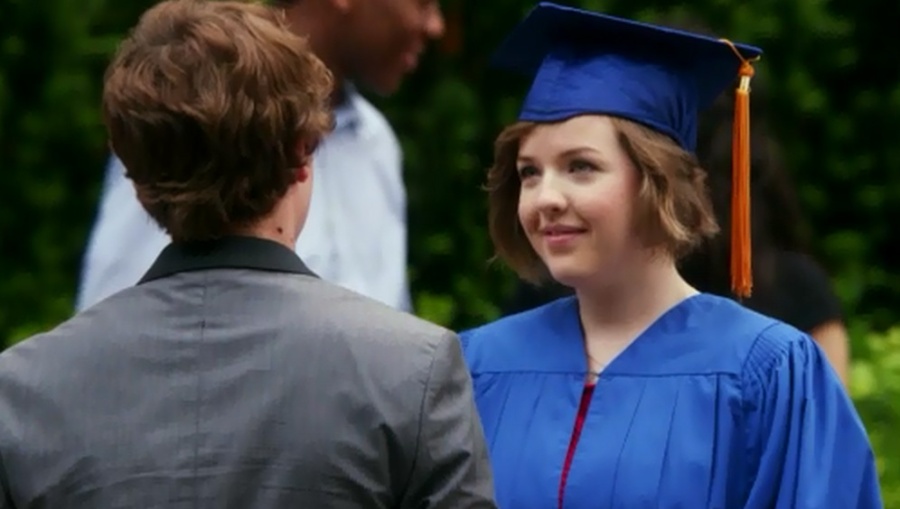 When it comes to the fate of Eclare, us fans have been acting crazy since season 10.  Over the years I’ve been all over the map in terms of how I feel about them.  An overwhelming majority of us probably assumed the ending would be extreme, whether it’s them breaking up for good or them riding off into the sunset on a unicorn.  But for all of the seemingly ridiculous stuff they’ve put them through over the years, their ending feels more realistic and satisfying than anything they could’ve done to appease either side of the epic Eclare debate.  They’re still together, but Clare’s putting herself first, to perhaps become that focused and driven Clare Edwards who’s so much more than the smart one.

There were a couple of side plots that were thrown in, but I don’t feel like grading them.  First off, Jackogen briefly reunites, but falls flat once again.  After Dallas botches prom, Imogen’s upset because going to prom was the reason Jackogen broke up and now it’s not happening.  Becky drags Imogen to Jack’s to talk it out, and Jackogen apologizes to each other.  Imogen and Jack go to the makeshift prom, but while there Imogen misses out on dancing and having fun with her friends because Jack isn’t interested in any of that.  At graduation, Imogen tells Becky things are over for good with Jack because she realized how little they have in common.

With Imogen being the least-connected of the senior group, a quick Jackogen plot is the end result.  Imogen’s biggest issue is the fact she always compromises who she is to make others happy, and she ruined her prom night by doing it again when Jack had no interest in the whole “prom industrial complex.”  It was sweet of Becky to recreate the conga line for Imogen a graduation, a reminder that “the best ship is the friendship.”

In Part 1 of this episode we see Hunter pretty hostile toward Miles.  Hunter freaks out in class when he doesn’t finish his test and Miles tries to calm him down, but Hunter yells “You never help, you only make things worse.”  Miles notices Hunter has a crush on Arlene, so he decides to help Hunter become closer to her by hosting a pool party.  However, Hunter would rather be on the computer than hanging out with everyone, and he freaks out after accidentally falling into the pool.

Later, Miles finds an angry Hunter who challenges him to a fight with Kendo sticks.  After Hunter wins, he tells Miles he’s tired of being bullied by him and he also misses their dad.  Miles tells him that he will be a better brother for him and the two hug it out.  Hunter is a loner and very guarded, so in the now we aren’t going to receive a plot about his feelings toward the family’s situation that’s as in depth as Frankie and Miles’ storylines.  Those two characters have found themselves in storylines that present them with similarities in their behavior compared to their parents’ behavior (Frankie and their mom, Miles and their dad).

Meanwhile, Hunter’s in his own secluded universe.  He’s shown generally-positive emotions toward his dad throughout this situation, and we continued to see that here.  “I knew he wasn’t perfect, but I miss him,” Hunter says about his dad.  He also felt like his dad protected him from Miles always making fun of him.  However, I do have to give it up to Miles for showing maturity in wanting to be there for his little brother.  He’s mostly been in the background in 14B, but that’s because of 1) they’re giving his character a “cool down” period, and 2) he doesn’t need another full plot at the moment for us to see that he’s much calmer without his dad around.