NextDegrassi Promos 1409: Something’s Got To Give
Degrassi

Miles is late waking up to drive Frankie and Hunter to school.  After Mr. Hollingsworth yells at Miles, Frankie finds his stash and grills him about being addicted to weed.  At school, Miles tries to apologize to Tristan, who’s still upset because Miles ditched their presentation.  Miles tells Tristan that Perino will allow them to redo their presentation, and Tristan agrees as long as they meet up later to study.  Later, Tristan shows up with Frankie, Hunter and Winston and they hold an intervention.  Miles lashes out at them and runs out to his car.  As he’s backing out, he runs into Maya on her bicycle.

Maya’s unharmed and Miles winds up driving her to her therapy session.  While she meets with her therapist, Miles gets high in his car as he waits for her.  Once she returns, Miles drives slowly and Maya finally notices he’s high.  He accelerates and his car tears off opened door of a vehicle parked on the street.  Maya demands that Miles go back to the scene, but he refuses: since he has marijuana in his system he’d be charged with a DUI, and the consequences he would receive from his father would be too much for him to bear.

GRADE: B
QUICK REVIEW:  This was a setup episode, and in the case of Maya and Miles it puts them in a pickle going into 1409.  It’s awesome that we see a character actually going to therapy as opposed to it being implied!  It’s easy to see why Maya let things go after Miles told her what his father would do to him if it got out that Miles crashed into a car while high.  She still recognizes that Miles is in a dark place, and even though she’s going to therapy for anxiety stemming from Miles’ behavior and Cam’s suicide, that isn’t going to stop her from trying to protect Miles.

The Case Of The Degrassi Nudes Stalker

Zoë comes clean about the stalker’s demands, leaving the squad furious that she didn’t tell them when he first contacted her.  Zoë says they need to stick together, so they all visit Grace and ask for her help.  She’s able to track down the person to the Hollingsworth home, so Zoë and the squad interrogate Hunter.  They take his computer and get evidence of his graphic novel and blackmail him into no longer sending them threatening messages, and he agrees.  Later, Hunter’s at The Dot with Arlene and tells her he has no idea what the cheerleaders wanted with him.  He says he just agreed to their demands so they’d leave him alone, meaning the identity of the stalker is still unknown.

GRADE: A-
QUICK REVIEW: I really liked this plot for several reasons.  1) Jack confirmed that she does know what they were doing can be considered child pornography by law.  In my commentary about Zoë in 1405’s Power Rankings, I mentioned Jack’s motivation for being a part of Degrassi Nudes could be more about empowering women.  If you’re questioning why Jack would willingly partake in this scheme knowing it’s illegal, think of it this way: countless young people engage in underage drinking, fully aware of the fact it’s against the law.  2) Jack’s knowledge is counterbalanced by the rest of the squad’s lack of knowledge (aka Lola having no clue what they were doing is considered child porn).  3) I like how the writers are building up Zoë and the squad through a false sense of relief, only to have it all crashing down in later episodes. 4) Misdirection city with the seemingly obvious culprit (Hunter) not being the stalker. 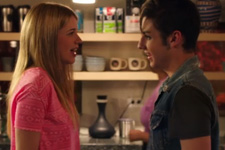 Becky enjoys spending time with Jonah as they work on a song together because he encourages her.  He invites her to sing with him at The Dot’s open mic night and she agrees.  Drew gets kind of jealous because he believes guys and girls can’t be friends, and Jonah’s using this situation to make a move on Becky.  That makes Becky’s next meetup with Jonah uncomfortable, and she tells him she has a boyfriend.  Jonah tells her that he’s committed to God, so he wouldn’t try anything.  Prodigal Spoon’s performance is a success; while Drew apologizes for being jealous, Jonah walks off looking disappointed as Drecky makes up.

GRADE: B-
QUICK REVIEW: Becky and Jonah’s interaction in the episode was better than their first meeting.  I don’t think anyone actually likes Drecky, but at the very least you can understand specifically why they were drawn to each other and started dating:  they came together when they were both at very low points in their lives, and relied on each other for emotional comfort.  Outside of that Drecky has nothing in common, but on the other hand Becky and Jonah share core traits (music and God).  By default Jonah has the ability to provide Becky with the comfort she’s looking for (she told Drew that the band is the only thing she has right now), and it’s only a matter of time before he edges out Drew.