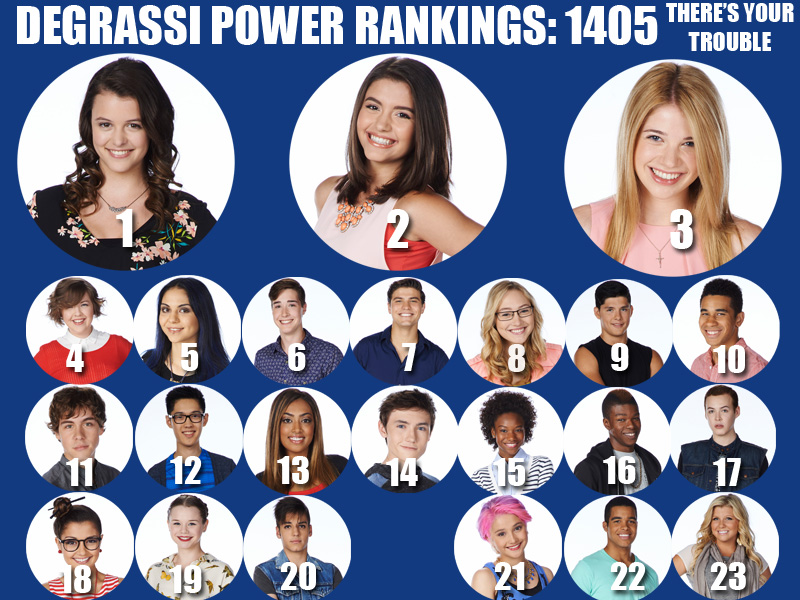 1) Frankie Hollingsworth (Last Week: #4)
It takes guts to do the right thing when everyone around you is doing the opposite.  Frankie did just that, and that’s why she’s now #1 in the rankings.  There’s going to be a lot of competition throughout this season for the top 3 spots, and Frankie could easily be bounced from this position as early as next week.  But she’s a good girl, and her arch leaves her in a position to be competitive.

2) Zoë Rivas (—)
Last week I said Zoë would sit here until this week.  She’s still sitting here.  The complexity of her mindset and her character’s influence over an entire group of people is mindblowing.  I keep seeing people talk about how this Degrassi Nudes plot isn’t realistic, or that all of these young female characters should know what they’re doing is actually child pornography.  You know it.  I know it.  The characters know what they’re doing is wrong because of the dangers of posting nude pictures of yourself becoming public, and the shame/embarrassment that can come with it.  But I don’t buy that all of them would know what they’re doing is punishable by the law.  At that age, I don’t ever recall thinking that my fellow teenagers distributing nudes to other teenagers would be considered child porn.

As far as the realism of a nudes distribution scheme, it isn’t far fetched to believe it’s happening since Snapchat has now implemented an in-app payment feature.  Grace doesn’t care because she stays out of other people’s business. It’s admittedly weird that Jack seems all for it.  But at the same time, one could spin her willingness to partake as her eagerness to do whatever it takes to empower women (remember Zoë’s big speech the day they agreed to start doing it? It’s all about the women being in control).  The rest of the girls (Lola, Shay and the extras) are viewed as young and naive, afraid to go against Zoë because of the power and intimidation she wields as their captain.  Oh and just for fun, check out this news story about a Canadian teen who ran an underage prostitution ring.

3) Becky Baker (#9)
Often times people will just go through life carrying a heavy heart instead of confronting their feelings (the best example of this right now on Degrassi would obviously be Miles).  Good for Becky finally saying what needed to be said to her brother.

5) Grace Cardinal (#8)
She continues to prove that lots of development and screen time aren’t necessary for a character to be effectively awesome on this show.  It’s all about quality of their appearances that matters.  Now if only we could get Connor and Jenna to log some screen time sooner rather than later…

11) Eli Goldsworthy (#16)
Eli officially works at The Dot now, which means we can expect to see him more often.  It was a jerk move of him to punch Drew.  No, I don’t believe season 10 Eli is rearing his ugly head or that he’d ever go after Clare or the baby like that.  But what was important about that scene is that he admitted to Clare that he’s angry at her.

It doesn’t need to be pointed out that Eli cheating on Clare was wrong.  It’s a massive breach of trust, however, Clare hasn’t necessarily been forthcoming with the truth about Drew/the pregnancy/etc over the past several months with Eli.  Even in this episode her phone rang, and she lied to Eli about who it was for no reason.  When Eclare is on point, they can be magical.  But when their communication breaks down, it does so in the most catastrophic of ways possible.

20) Jonah Haak (Unranked)
His debut was nothing special, but we’re hoping he’ll become interesting as his arch with Becky progresses.