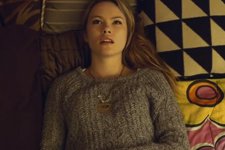 The last time I watched a web series about teen angst, it was a British series titled LOL somewhere around 2009.  While that series revolved more around just one central character, new series “Teenagers” has the task of bringing enough depth to a handful of characters at once, as they all have their own archs to follow.

Short and sweet, Teenagers’ premiere episode delivers just a taste of the characters and the drama we can expect from them moving forward, enough to keep me wanting more.

For me the most interesting characters so far are the ones who are similar in inexperience and whose archs are revealed in this episode:  Bree (Chloe Rose) and T (Emmanuel Kabongo).  Bree is 17 and seems to have little interest in having the type of fun her friends Olive and Sara do (getting high and having sex).  Bree gives into the pressure and smokes weed, and while high she goes into a monologue about how she’s a virgin because she’s terrified her first time will be a disaster.  “It doesn’t even have to mean anything, it just…has to be memorable,” Bree says, a revelation that falls upon deaf ears as her friends are stoned and giggling over something on a computer.

I’m eager to see whether or not Bree’s first time will indeed be memorable, especially when a guy named Ash (Nykeem Provo) introduces himself to her while at a bus stop.  Ash instantly comes off as a player, having sex with a girl then immediately leaving, and then having a brief phone conversation with a girl he barely remembers named Melissa while checking out Bree.  Ash blows off the urgent tone in Melissa’s phone call, but one can assume whatever the issue is will also impact whatever relationship Ash may form with Bree.

The first scene of the episode shows T getting brutally beaten by Jeremy (Nick Stojanovic) and his friends.  “WHAT THE FUCK WERE YOU DOING WITH HER?!?!” Jeremy yells as he assaults T physically; he also uses the N-word in disgust before walking away from T’s bruised and battered body.  That scene is one of the climaxes of the series, and later in the episode we see how it all began.  T is a pizza delivery guy and winds up delivering to a house where a girl answers the door in nothing but her bra and panties.  It’s Olive (Dana Jeffrey), and she openly flirts with an awkward T.

Later we see Olive is with Jeremy, her boyfriend.  Outside, T is left speechless by what he just witnessed.  From the look on his face as he saw Olive’s body, one can tell T is the kind of guy who’s naturally awkward.  His reaction afterward while sitting in his car is definitely one of a guy who’s had very little experience with women (trust me on this).  Though this episode was quite tame, the opening scene shows Teenagers has the potential to be (and will become) quite explosive in the future.

TEENAGERS RATING SYSTEM: Kind of like how I give grades to Degrassi episodes, I’ll rate these Teenagers episodes as well using what I call the “Chloe Meter.” The more Chloes, the better!