Degrassi Episode Review: All I Wanna Do 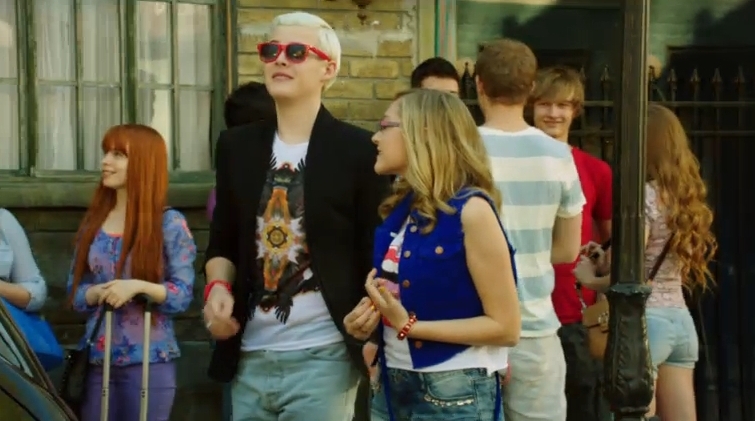 All I Wanna Do, as a whole, is an improvement over the premiere episode Summertime.  Degrassi may have stopped it’s two-parter format, but the idea of having a story arch that spans over an entire block still exists.  Some plots (i.e Tristan’s in this episode) may not drive the overall arch with much force, but they need to offer something valuable in some way, shape or form.

TRISTAN PLOT REVIEW:  What I secretly love about Tristan’s plot is that in my head its theme is an immediate throwback to one of the Degrassi’s most underrated episodes, Mirror in the Bathroom.  Upon arrival in Paris the guys and girls are assigned separate living quarters, with Miles, Chewy and Tristan being roommates.  Tristan assumes that Miles and Chewy won’t want to live with him if they find out he’s gay, so he pretends that Maya is his girlfriend.

The fact Tristan already had his mind made up that Miles and Chewy would have an issue living with “a guy that likes guys” gives some insight into his character, one who’s seemed pretty confident with his sexuality up until this point.  Obviously Tristan’s dealt with being bullied in this manner before, but Miles continues to impress by taking the extra steps necessary to assure Tristan he and Chewy are cool with Tristan’s sexual preference.

While this plot harbors virtually no drama, its underlying theme resonates because it’s something we had to, have dealt with, and will deal with in our own lives.  Our insecurities can be justified by past events.  Society is quite open about rejecting each other on a daily basis, however, people can also genuinely not give a damn about whatever it is you won’t reveal for fear of judgement.  Tristan learns the positive side of the lesson that just because it’s a big deal to us in our heads, it doesn’t mean it’s a big deal to everyone else.

CLARE PLOT REVIEW:  Clare’s cancer storyline continues to be difficult to watch.  Aislinn’s churning out what looks like effortless performances, while the story remains engaging based how draining the situation itself can be, mentally and physically.  Clare’s at a point where she doesn’t want to think about death, promptly turning off a WestDrive episode where Zoë’s character has cancer and asks if she’s going to die.  She’s also feels as if control is slipping away once she discovers that her hair is falling out.

While Eli is obviously doing nothing but trying to be helpful, seeds of doubt are placed in Clare’s head about whether he’ll be around for the long run by a fellow cancer patient whose boyfriend eventually broke up with her.
Clare decides to shave her head, and with the help of Adam and Imogen finds a wig that she thinks will impress Eli for their date.

While watching this plot I get a stronger understanding of how difficult it is to remain positive while dealing with cancer, and how important little things are such as Adam and Imogen taking time to help find Clare a wig, and Clare getting dressed for a date with Eli in her hospital room.  While there are humorous and comforting moments we’re still left uneasy with the fact that Clare needs an MRI to see if the cancer has spread.  The uneasy feeling continues as we prepare for the worst, but hope for the best.

ALLI PLOT REVIEW: While we all roll our eyes and say “Of course” to Alli meeting a guy in Paris (because as TeenNick’s promos accurately say, Alli is “book smart and boy dumb), the ride there is somewhat interesting.  While everyone in Paris from Degrassi has their own social groups or are paired off like Jenna and Connor, Alli’s left to keep herself occupied in the City of Love.

She wanders the streets of Paris alone, with nothing more than a map and a cardboard cutout of Clare’s head so Clare could “take pictures” at various landmarks, a brilliant touch by the writers.  Alli asks a stranger to take a picture of her and Clare, but the guy tries to steal her phone.  However, he’s stopped by a guy named Leo, who returns Alli’s phone and the two become acquainted.

This plot is neither great nor awful in setting up what will be Alli’s storyline in Paris.  We this guy will become her love interest.  The only question now is how will this relationship blow up in her face?