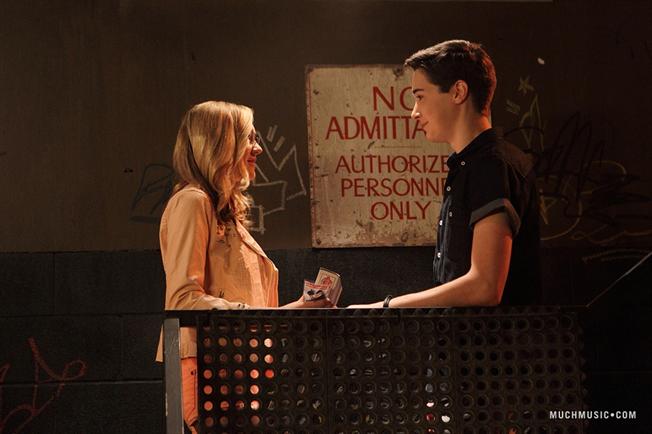 “A Whole New Degrassi” is the tagline the show is selling us as it journeys into its 13th season, from the departure of old characters finally setting in, to the tenure of new ones beginning, and a complete deviation from the title sequence format Degrassi had used for 12 years.  Even the show’s timeline is different, as the season kicks off during the summer time and looks to take place in that time period for at least a few more episodes.

Degrassi has produced fantastic premiere episodes over the past several years, but this one ultimately falls short of the overall qualities that helped get seasons 10, 11 and 12 off to blazing starts. Summertime’s primary plot, while providing us some promise for future episodes, is merely mediocre compared to the much-stronger B and C plots.

MAYA PLOT REVIEW: When it comes down to it, Maya’s plot feels more like setup/filler material than a plot that drives a season opener.  With Maya we’ve now reached a point where they keep going back and forth between this sweet girl and someone going through various “bad girl” phases…bad girl in quotes because in this episode she was either legitimately misunderstood by her mom, or busy being ineffective at being an actual bad girl.  We knew that Maya would be headed to Paris by the end of the episode, but nothing ever happened to put that into question.  The upside to Maya’s conflict comes near the end, when she confesses that she feels like everyone leaves her eventually.

As a whole, the newbies make little impact in their debut, though we know their roles will expand in the very near future.  Winston just exists in this episode, while Zoë shows hints of being the diva the show has advertised her to be.  Miles was the most interesting character of the night.  We can tell he’s a rich kid who gets into trouble, but the verbal tongue lashing he received from his high-profile father instantly adds intrigue (and a potential storyline of its own down the road).

At the end of the episode we find all of the characters on a bus, ready to head to Paris for the summer.  By that point the plot has done a lot of subtle things to setup what’s coming: relationship drama between Maya and Miles, and a juicy feud between Maya and Zoë.  While this episode does enough to ensure that upcoming is full of potential, it does little for itself to be engaging in the now. 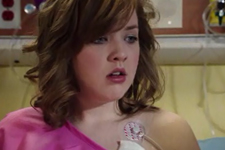 CLARE PLOT REVIEW: The knot in my stomach that wouldn’t go away the second Degrassi revealed Clare might have cancer in The Time of My Life returned, as Clare’s cancer diagnosis is confirmed in this episode.  This plot is difficult to watch, but in the way that you can appreciate because you know that what the show is doing more than connecting with you…it’s striking a nerve.

Eclare’s “sexy online exchange” is as awkward and silly as I would expect that kind of situation to be in real life.  The plot’s tone abruptly switches as Helen informs Clare that her test results came back positive for cancer.  The show’s decision to have music playing while we see Clare’s reaction to the news provides a more emotional impact than if we were to hear an actual exchange between Clare and Helen (and it’s just as effective as Spinner’s cancer reveal scene in Death or Glory).

Where this plot shines is that not only does the show delve into technical details describing how the treatment process will work, but also Clare’s reaction to it all as things progress.  She knows she has cancer, but she feels fine, so she’s able to go into it with a very positive outlook at first.  Aislinn does a fantastic job of conveying Clare’s fear once the gravity of the situation sinks in.  In returning to Toronto to be their for his girlfriend, Eli simply does what I and any other guy with a lick of sense would do if they found out their girlfriend had cancer.

The thought of being in Clare’s situation is terrifying from every angle, and the final scene is a mix of emotions: Clare’s long journey through treatment begins, but she’s surrounded by the two people she loves most.  It’s hard to tell how this storyline will play out, but it got off to a very strong, emotional start. 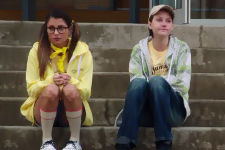 IMOGEN/ADAM/BECKY PLOT REVIEW: I browsed through a lot of random fan commentary about this plot after the episode, and one of the things that struck me was how some thought that Becky’s jealousy seemed a bit much.  Imogen’s awkwardness in this episode made it impossible for her to be subtle, so it was blatantly obvious to Becky that Imogen had a thing for Adam, someone she’d be working with all summer while Becky was away.  If I were Becky, I’d be lying if I said wasn’t worried.

There’s a bit of hesitation at the thought of Degrassi keeping Imogen for another season, then immediately throwing her into the midst of a love triangle.  However, it’s interesting watching Imogen in this episode as she basically clings to Adam from the moment she sees him.  I like the dynamic of Adam and Imogen interacting and summer camp is a fun backdrop that will enhance that, though I don’t really see Adam as the type who would just up and cheat on Becky because of a lapse in self control.  Whether it’s Imogen’s neediness, or Becky/Adam’s jealousy, I’m interested to see how this plays out.