HUNTER PLOT SUMMARY: Hunter’s excitement about returning to Degrassi turns into horror after realizing his mom and Miles are placing him in a psychiatric hold at a mental health facility. He has several outbursts while there, trying to escape and yelling at his doctor that he isn’t sick or crazy while throwing his chair. Hunter starts to cooperate by filling out a thought journal when his doctor tells him she can help him talk to Yael. Hunter finally has a break through when he admits to the doctor and his family that he feels his life is a hopeless uphill struggle, comparing it to the Myth of Sisyphus. The doctor agrees to let Hunter write a letter to Yael, but Miles does one better by having her show up talk in person. Hunter tells Yael he suffers from depression and Oppositional Defiant Disorder, and he also admits that he has violent thoughts when he’s angry. He apologizes to Yael and she says she doesn’t hate him, but that she needs time to think about what’s happened. 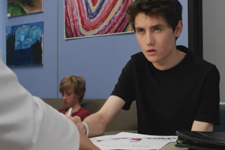 The seeds for this arc were planted as far back as You Drive Me Crazy in early Season 14, when Frankie discovered the violent comic Hunter created about the cheerleaders. Now here we are, two seasons later, watching a character get the help he initially doesn’t think he needs.  The opening scene is great; the tone flows from hopeful as Hunter’s set to return to Degrassi to “hopeless” as his family pulls up to a mental institution.

It’s strange to not have very much to say about an episode’s main plot because it was so straightforward. Spencer obviously nails Hunter’s emotions in every scene, from the pain in his voice when talking about Yael not wanting to speak to him to melting down as we’ve seen him do several times before.

Mental illness is one of those things that people dismiss because it’s not a visible illness, so it “doesn’t exist” or “isn’t as serious.” However, Hunter comparing how he feels every single day to the story of Sisyphus, a king doomed to roll a boulder up a hill only for it to roll back down for all eternity, paints a crushing picture of what it feels like. 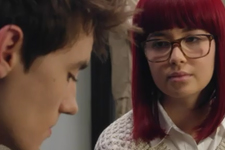 The only weird thing about this plot is the lack of emotional connection I felt toward Hunter and Yael’s conversation. I do feel like this should’ve been a powerful moment, but it simply wasn’t.

A major part of that though is a result of the circumstances around Yael’s character when it comes to Hunter; she was essentially plugged into the role Arlene filled in Season 14. But given how important Yael is to Hunter, as we’ve seen through his actions since #SorryNotSorry, developing their relationship will become crucial as this storyline progresses.

SHAY PLOT SUMMARY: Shay’s talking with Frankie about what they’re going to say to Northern Tech’s Captain, Kara, during their meeting about the banner when Shay learns that Frankie was the one who drew the monkey. Frankie also bails on the meeting because she has to visit Hunter, but Shay promises not to mention Frankie is the one responsible. At the meeting, Kara is instantly annoyed that Shay, the lone black player on Degrassi’s volleyball team, is the only one in attendance. Shay says that the banner was a only joke and was never meant to be racist, but Kara explains that it racist and hurtful regardless of intent. Shay asks her father about the banner and he tells her about the history of why depicting black people as monkeys is racist, but he also tells her it’s more complicated than simply labeling someone as a racist if they engage in racist behavior. Shay finally tells Frankie she isn’t okay with what Frankie did. She doesn’t say she thinks Frankie’s racist, but she believes Frankie needs to own up to what she did. Shay also reveals that other teams are boycotting playing against Degrassi until the person responsible for drawing the monkey quits. 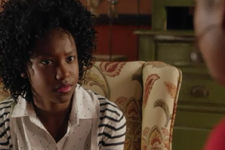 The conversation between Shay and Kara is so wonderfully uncomfortable, and it shows how vastly different people’s experiences can be even when it comes to something like race. “But it still hurt, because we live in a world where lots of people do mean it like that,”  Kara said in response to Shay saying that the person who drew the monkey didn’t mean any harm. It’s the most important line of their conversation.

It’s crazy that I even have to explain this, but in any situation just because no harm was intended it doesn’t automatically clear you of responsibility for your actions. Even actress Sara Waisglass has pointed this out in regards to this storyline, as she saw fans still engaging in the but-Frankie-didn’t-mean-to-be-racist-so-everyone’s-overreacting mentality.  The premise here is that Shay’s conflicted because she’s learning that what happened was wrong, but she also knows Frankie. Kara knows nothing about Frankie or anyone on the team for that matter, so why on earth would she just take Shay’s word for it and give the culprit the benefit of the doubt when it comes to a behavior that’s considered racist? We surely don’t give strangers on social media that luxury when dragging them for [insert anything racist/sexist/offensive/stupid that they say]. 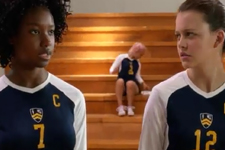 My parents never sat us down and said, “Here’s a list of every behavior that’s considered racist toward black people.” Race only really came up in situations where it was relevant to our specific lives, whether it was a major news event at the time or something my parents were aware of happening to them. My sisters and I were probably sheltered from a lot of the latter, but growing up in an all-white neighborhood my parents repeatedly said that  we were being held to a higher behavioral standard than others, whether we knew it or not (we didn’t). As a kid I didn’t understand why I was never allowed to go trick-or-treating, or why my parents didn’t want us going into the houses of our friends in the neighborhood (both because if something troublesome happened, they didn’t want things being blamed on the black kids). All I knew was that other kids got to do cool things and I didn’t.

Younger me knew about racist things like the n-word and comparing a black person to a monkey, but Shay not knowing the latter is the equivalent of me not knowing about blackface growing up. Despite its long, offensive history, blackface wasn’t a prevalent issue that I faced during my childhood, so I didn’t even realize it was happening in the very cartoons I watched religiously.

It’s not surprising that neither Shay nor Frankie went into this episode knowing that depicting Kara as a monkey is racist. The difference is Shay’s made an active attempt to understand the gravity of what’s happened while Frankie hasn’t.

“I mean what’s so bad about monkeys anyway?” we overhear Frankie saying in a conversation with Lola, where the two ultimately dismiss the controversy. So again I say this storyline isn’t about painting Frankie as a racist, it’s about pointing out that she just doesn’t get how what she’s done has affected other people.

ZIG PLOT SUMMARY: While Zig assumes that he and Maya are back together, she’s not so sure and suggests they meet up later that night to talk. Zig decides to treat Maya to a fancy dinner, but she bails on him via text to work on a school project. Later, Tiny and Lola show up at the restaurant to console an angry Zig. Lola agrees with Zig that everything is partly Maya’s fault because she went off to NYC with Jonah, while Tiny believes Zig did this to himself. Zig decides to go Maya’s house that night, barging in the window, blaming her for their breakup and accidentally destroying her project in the process. The next day, Zig shows up to school having tried to recreate Maya’s project for her and apologizing for his outburst the night before. Maya tells him that she doesn’t know how she feels about him anymore, and trying to overcome him cheating on her is too much for her to deal with right now. 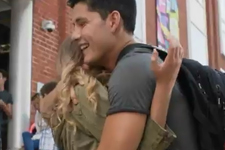 Thank goodness my belief in #SquadGoals that Maya wasn’t “all in” on a Zaya reunion was confirmed. It’s crazy how much of a fuckboy this relationship makes Zig, all of his own doing. The restaurant scene is so absurd that it’s hilarious, and it’s honestly one of my favorite scenes in Next Class so far. Zig saying “She basically made me cheat on her,” made me laugh out loud because I imagined every single member of the Degrassi fandom reaching through their screens to break one of those fancy dinner plates over his thick skull. Meanwhile, poor Tiny’s sitting there listening to his girlfriend spout even more nonsense. On one hand, Lola represents a generation that heavily relies on digital communication, but she also veers off into a victim-blaming rant that makes her sound like the female version of Mr. Novak.

Maya has been one of my favorite characters for a couple of seasons now. She’s spent a lot of time trying to care for and protect people around her, and in Next Class she’s started focusing more on herself. I love how honest she is about her feelings, that she felt a spark, regretted it, and now feels that trying to work through things after Zig cheated is too hard. Degrassi has elicited complaints for years about randomly making characters superstars virtually overnight and slapping troubled couples back together, but with Maya Matlin’s arc in Next Class they’re basically giving us a 2-for-1 special in terms of showing patience.