FRANKIE PLOT SUMMARY: Rival volleyball team Northern Tech plays a prank on Degrassi’s squad, stealing their clothes and pulling a fire alarm so the team has to go outside without them. After Frankie winds up accidentally naked in front of a crowd of students, she vows to prank Northern Tech back. Everyone on the team is on board with getting revenge…except Shay. Because Northern Tech’s nickname is ‘The Zoo,’ Frankie and the team draw them as zoo animals on a banner and deliver it to their school. Shay’s livid when she finds out and yells at Frankie. Shay says Frankie’s future is secure because she’s rich, but if the team gets in trouble Shay’s future is in doubt; her family can’t afford training or college tuition, so practices/games are the only way she can stay on track to receive scholarships. The two make up, but the volleyball team finds themselves in trouble…Northern Tech’s captain is offended that she was drawn as a gorilla on the prank banner, and accuses Degrassi’s volleyball team of being racist. 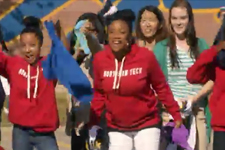 In Degrassi’s 35+ years of existence we’ve had moments within storylines where racism is acknowledged, such as Manny Santos being falsely accused of being racist in Love Is A Battlefield, and Danny Van Zandt being profiled by a store employee in Got My Mind Set On You.

There have been actual storylines tackling it head on: Dallas and Connor were profiled in Army Of Me/Everything Is Everything, and the show’s most-notable storyline involved Degrassi Junior High’s B.L.T. dating Michelle, a white girl whose family was racist. But Degrassi hasn’t necessarily ever taken this subject and fleshed it out beyond after-school-special mode, a space where the show aggressively places the characters AND viewers in a position far more uncomfortable than any accidental nude scene.

Even though this season was written and filmed a year ago, never has a Degrassi storyline felt more relevant to current events than what we’re about to experience with Frankie’s storyline in Season 2. 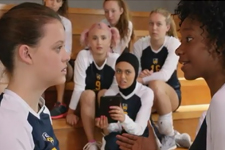 Next Class doesn’t blatantly place the racism stamp on this storyline until the final scene of the episode, instead choosing to address privilege through a “less offensive” route: Frankie’s social status. Degrassi’s had characters commenting on Frankie’s class privilege since season 14, when part of Zoë’s reasoning for throwing Frankie under the bus for Degrassi Nudes was that she’s rich and her dad would bail her out. “None of us have that luxury,” Zoë told Power Cheer, a sentiment echoed in Next Class Season 1 by Shay. “Not everyone has a trust fund…” she said in #BootyCall, explaining to Frankie why she used cotton padding to stuff her pants instead of buying butt pads. Even Frankie’s boyfriend, Jonah, told Frankie to her face that she was spoiled before they started dating.

I love the honesty of Shay and Frankie’s confrontation. Shay admits she’s jealous of her best friend, but the point she brings up about her limited opportunities as compared to Frankie’s are valid. If the team suffers, Shay’s chances at following her dreams suffer with them. Their conversation, void of anything regarding race, is probably more palatable to society in general. Now imagine if Shay had mentioned something about being black during their fight. Privilege can be applied to everything from class, gender and race, but man can you hear and feel the discomfort in this day and age anytime the latter two are involved in a conversation. 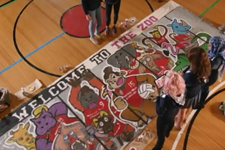 That’s why racial undertones are subtle throughout the beginning of this plot, as players on Degrassi’s volleyball team are unaware of what’s happening in various ways. “Why would I be offended?” Shay asks when Lola says that the Northern Tech girls “look like a bunch of criminals.”

“…That looks just like the captain,” Goldi says, referring to the gorilla on the banner, and the very next thing out of her mouth is “Why IS Northern Tech called ‘The Zoo’?”

They’re clueless about the meaning behind Northern Tech’s nickname (a school perceived as a bunch of wild, thuggish minorities), clueless that depicting a black person as a monkey is racist and they’re clueless to their own subtle prejudices toward their rival school.

And that’s the entire point of this storyline, as Degrassi challenges people to venture outside of that mental box where we store all of those convenient, black and white thoughts that train us to believe things are this or that with nothing in between. Thoughts like only internet trolls and vocal hate groups engage in racist behavior or have prejudices toward other people based on looks/class/religion/literally anything and everything. Degrassi is about to go there, and as it should be, the ride will be very uncomfortable.

MILES PLOT SUMMARY: As Miles prepares to leave for his new life at boarding school he feels bad for Hunter, who feels like he’s being left behind. Miles shows Hunter brotherly love by teaching him how to drive. Hunter realizes what Miles is doing and promises not to go off the deep end whenever he gets upset. Hunter drives Miles to Degrassi so Miles can get his school file, and while Hunter sees Miles talking to Tristan he gets upset and crashes the car in the parking lot. When Miles learns that Hunter crashed the car on purpose, he finally tells their mom about Hunter creating a kill list and taking a gun to school. Miles isn’t sure what will happen to Hunter now, but he informs Tristan that he’s staying at Degrassi, and the two reconcile their relationship. 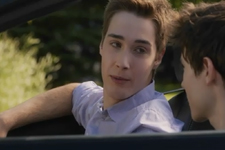 It seems like nowadays Miles is always threatening to go to boarding school at the end of every season, so of course there was no reason to believe it would happen this time! It warms my heart to see Miles Hollingsworth in the healthiest state of mind we’ve ever seen him on this show, which is why the situation with Hunter is even more heartbreaking.

The Hollingsworth family continues to be a mess, and now Miles finds himself in a position where he sees that his brother is the one who needs help. Miles knows that if he isn’t there for him, Hunter will go off the deep end as he has no one else in his life for emotional support. Hunter’s role in this story is brilliantly disturbing, as we witness what looks like an actual switch that goes off in his head, releasing a cold anger onto the world.

As useless as the Hollingsworth parents have been, thank God a character on Degrassi told an adult about a serious situation before it reached the point of no return.  “This is not your responsibility,” Miles’ mom said, but you’d better believe Miles feels like it is knowing how this family works. 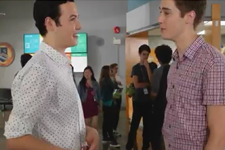 When it comes to Triles, these two characters are in far different mindsets in this episode than what they were during season 14. Real feelings may have developed between them back then, but they were a toxic couple on both ends, practically bleeding their own personal issues all over each other at various points up until the end of #TeamFollowBack. Miles hit rock bottom in Season 1 of Next Class and is now fully aware of destructive his past behavior has been. Tristan even seems to be maturing beyond his I’m-blindly-in-love-with-anyone-who-barely-looks-at-me phase. This shapes up to be the first legitimate chance these two have had at a functional relationship together.

MAYA PLOT SUMMARY: Maya’s applying for a co-op position  to work with Peter Stone at a music studio, but she finds herself distracted by her ex Zig. She becomes obsessed with finding out what he’s up to when she spots him hanging out with Esme, and Maya even accidentally likes one of Zig’s pictures of him hanging out with Esme. Peter gives Maya a rough track to complete to show what she’s capable of, but she fails to finish it in time because she misses Zig and is preoccupied with creepin’ on him through social media. While Peter reprimands her, Maya winds up getting the co-op position anyway. She also ends up reconciling with Zig, who tells her there’s no one else for him. 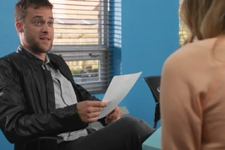 There are good things to have come out of this plot, namely the return of Degrassi alum Peter Stone. With everything that happened with him and Studz while he was originally on the show, it’s great to see that he wound up working in the music business. A subtle arc for Maya’s character in Next Class has been Degrassi showing someone working their way up through an industry, as opposed to up and being discovered like a Craig Manning (music) or Manny Santos (film).  As someone who works in the entertainment field (radio), I have a lot of respect for what Degrassi’s doing here. The young people looking to get into radio usually want to be a superstar with their own show. I’m considered an on-air personality, but my technical/production skills are what I’m most passionate about, and they’re what got me this job basically right out of college over a decade ago. 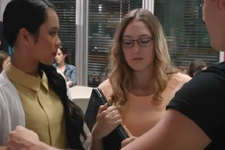 The hyper-focused Maya we saw in Next Class Season 1 falters right out of the gate in #SquadGoals, pining over Zig to the point that it nearly costs her the co-op position. Peter praised her song “Yes,” the final song of several she wrote in Season 1. Those tunes were a clever way for Degrassi to show the evolution of Maya’s romantic feelings toward Zig, with “Yes” confirming her love for him despite his insecurities convincing him otherwise and leading him astray. Combine that with no human being ever wanting to see that their ex is doing just fine without them and that’s a mountain of feels waiting to happen. 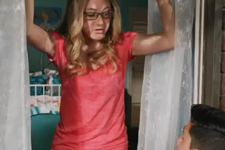 While all three plots in #SquadGoals are laying down a foundation for their respective storylines in Season 2, Maya’s is the only one that feels as if drifted off into generic setup mode wrapping up everything conveniently so the can story can move along to more important things. After that speech Peter gave Maya as she gave him an honest, but ridiculous excuses as to why she couldn’t finish the track in time, she just so happens to find out she got the co-op position anyway (while jamming her tongue down Zig’s throat nonetheless). The lack of an actual discussion between Zaya and that weird look on Maya’s face after Zig’s kiss goodbye indicates that even though everything seemed to magically fall into place, we’re probably headed for another round of the always intriguing battle between Maya’s future and Zig’s insecurity.