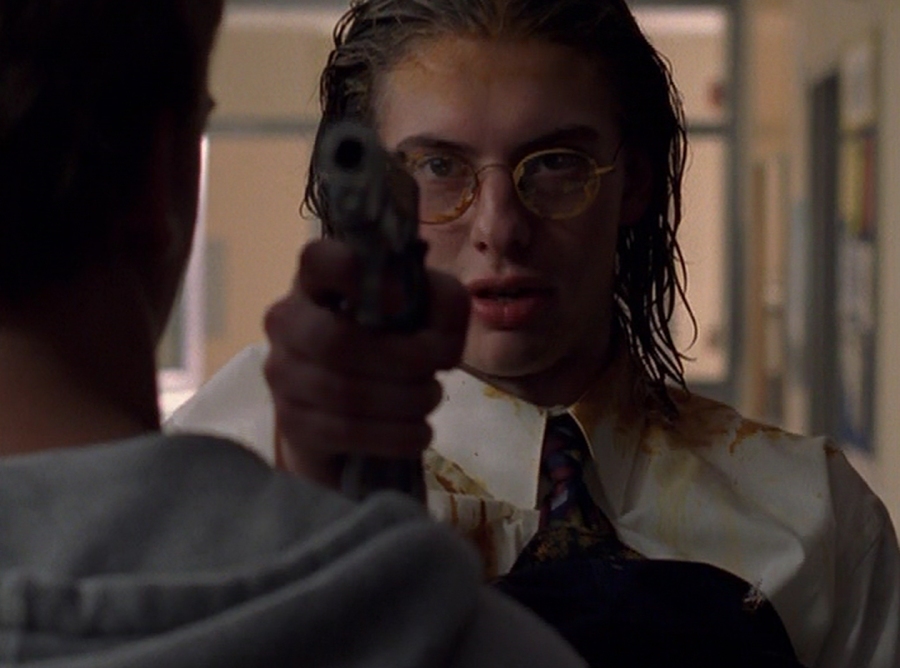 Episode Recap: While still being bullied by his peers, Rick retaliates by spray painting an “X” on the cars of Spinner and Jay.  Meanwhile, Rick finds himself having to work with one of his tormentors, Jimmy, on the Whack Your Brain team.  Jimmy realizes bullying Rick has gone too far, but Spinner, Jay and Alex are intent on getting revenge.  The trio sets up a trap at the Whack Your Brain competition, and Rick is doused with paint and feathers after winning the competition in dramatic fashion.  Emma tries to console Rick afterward, but she freaks out when he mistakes her kindness for flirting and kisses her.  Rick goes home, but eventually returns to school with a gun.

Rick approaches Paige, but while clutching the gun in his bag he decides not to shoot her after she condemns what happened to him.  He puts the gun away and cleans himself up in the bathroom, but hides when he hears Spinner and Jay walk in.  When they realize Rick can hear them, they blame the paint and feathers prank on Jimmy.  Feeling betrayed, Rick confronts Jimmy in the hallway and shoots him in the back.  Later, Rick finds Emma, Sean and Toby in the hallway.  He walks toward them wanting to shoot Emma because she rejected him, however, Sean tries to talk Rick into putting the gun away.  As Rick points the gun at Emma, Sean and Rick struggle over the gun and it goes off.  The rest of the episode deals with the characters reacting to the tragedy.  Toby, Emma and Sean are in shock.  Spinner blames himself for what happen to Jimmy, while Hazel learns her boyfriend has been shot.  Simpson lashes out at Principal Raditch for not taking Rick’s bullying complaints seriously.  The episode ends with Toby and Emma mourning at a memorial for Jimmy, whose condition is unknown. 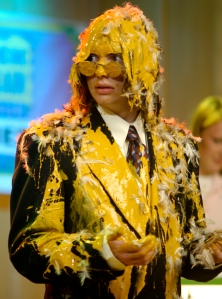 It’s weird going back to watch an episode that’s iconic.  Time Stands Still is considered by many to be the best Degrassi episode of all time, the peak of Degrassi drama that we believe every episode should strive for.  This episode is most known for the shooting itself, but that moment nearly pales in comparison to a broad view of one of the most vital stories Degrassi has ever told.

Some primary motivators of human behavior in relation to other people are doing things in order to 1) gain acceptance and 2) avoid rejection, themes I’ve said Degrassi has brilliantly tackled in earlier seasons.  Rick returned to Degrassi to show the people who hated him for hurting Terri that he’s changed.  The thing is, Emma was right when she told Rick in Mercy Street those same people wouldn’t be interested.  Instead, the students of Degrassi are hellbent on making Rick’s life as miserable as possible.  In Mercy Street, their anger toward Rick is justified, but the cause they’re fighting for gets lost in the emotion of their mob mentality.  It’s comparable to today’s internet culture, where an overwhelming number of keyboard warriors bully and harass others under the guise of “justice” on a daily basis, even in Degrassi’s own online fandom.  Tarring and feathering might be an outdated practice, but the use of public humiliation “in the name of good” is still alive and well.

So by the time you get to Time Stands Still, there’s no trace of a Spinner, Jay or Jimmy defending the honor of Terri MacGregor or anyone who’s ever suffered at the hands of domestic abuse.  They’re simply out to punish Rick for their own amusement. 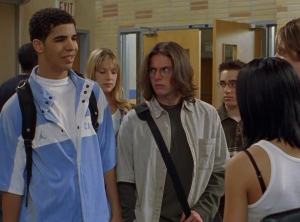 Part of what makes it easy to bully people is not having to face how your behavior impacts other people.  So it’s not until Jimmy’s forced to interact with Rick through Whack Your Brain that he sees how his behavior has not only affected Rick, but innocent bystanders as well (Toby, who got banged up while being aggressively interrogated by Spinner and Jay).  “I’ve been suffering weeks…it’s a big joke to you and your friends,” Rick tells Jimmy.

Degrassi isn’t interested in making political statements or preaching to viewers in TSS.  They rely on emotion to tell this story, presenting a wide range of perspectives which create an uncomfortable, but realistic feel from beginning to end (the show takes a similar approach nearly a decade later in the season 12 episode, Bitter Sweet Symphony). Raditch blows off Rick’s plea for help before telling him to “come back if anything serious happens.”  We’re always told to ask for help if we need it, but in the words of Toby Isaacs in the following episode (Back In Black), “What if nobody listens?” After having dealt with Paige Michalchuk feeling as if her being raped was brushed off by the world, early season 4 continues to punch us in the gut with the horrid reality that sometimes the world will ignore your pleas for help, no matter how loud you scream.

Once Rick is tarred and feathered, Jimmy denounces Spinner for being involved.  “Save the bully crap for someone who won’t fight back,” he says after being threatened by Spinner.  JT thinks it’s funny that the “psycho” was humiliated.  “You wouldn’t think it was so funny if it happened to you,”  Toby says, a sentiment echoed similarly in a scene from the early stages of Paige’s rape storyline.  After the shooting, Ashley deems Rick a “psycho” and a “freak” while Toby struggles coping with what his friend has done.  Simpson angrily points out the hindsight that always presents itself in these situations, knowing they could’ve done more to help Rick.  “None of us took Rick’s bullying seriously enough,” he tells his family and the Kerwin/Isaacs.  In essence, they were all part of a domino effect of the worst kind.

Watching this episode while knowing what happens in subsequent episodes makes watching Toby, Emma and Sean in the aftermath of the shooting even more fascinating.  This is a traumatic event which affects them all strongly, but differently.  Toby’s turmoil is dealt with immediately as he goes into denial, joining the ranks of Degrassi characters who refer to Rick as a “psycho.”  However, Toby shifts to a more somber tone once learning that Rick has died.  Sean is visibly shaken, but after having physically confronted Rick he’s left speechless.  Emma’s reaction is the most haunting; while she physically survived, she looks as if part of her died the moment Rick pointed the gun in her direction.

Degrassi presenting the “gray area” in life is very prevalent in latter seasons of the show (seasons 10-14).  As I rewatch TNG episodes I’ll be on the lookout for more of this, but it definitely exists here in TSS.  I’ve lost count of the number of times Rick has been labeled a “psycho.”  What he did to Terri in season 3 was awful.  What he eventually did in this episode, shooting Jimmy and nearly shooting Emma, was horrible.  Watching this episode in 2015 as Rick eerily walks down the hall ready to kill Emma for rejecting his romantic advances is a disturbing reminder that this happens in real life.  But we also saw humanity in Rick, someone who was enthusiastic about learning and also wanted to be accepted by peers, but never stood a chance at redeeming himself at Degrassi.  His optimism at the end of Mercy Street was shattered by reality by the time the story reached Time Stands Still.  “You think they wanna know who I am?” He asks.  “They wanna torture me.” 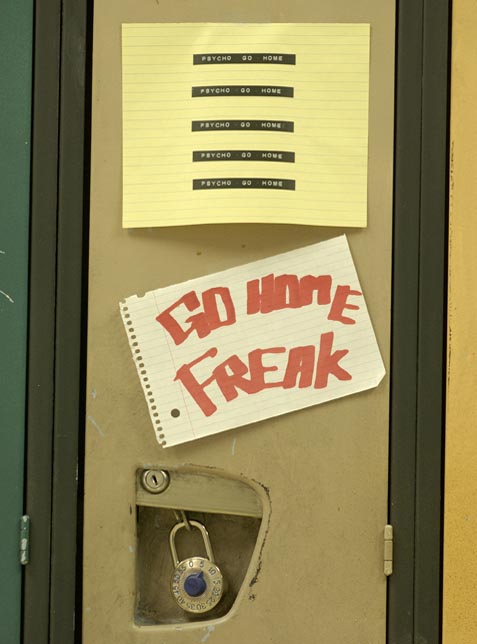 I haven’t said much about Spinner in this, but I’ll just say Degrassi does a fantastic job of creating a future storyline for him that has him searching for the same things Rick wanted: forgiveness, acceptance, compassion.  Speaking of the latter, Time Stands Still is an wonderful, unforgettable, heartbreaking episode.  For me the most memorable moment comes when Rick returns to Degrassi with the gun and approaches Paige.  He could’ve easily put a bullet in her head before going off to gun down everyone he felt had wronged him. But he didn’t, because despite her hatred for him and what he did to Terri, Paige showed Rick compassion in that moment while everyone else in the cafeteria laughed at him, a move that saved her life without her even realizing it.  Time Stands Still is a forceful reminder of how, whether we want to believe it or not, our behavior shapes the world around us, and how quickly that world can come crashing down.