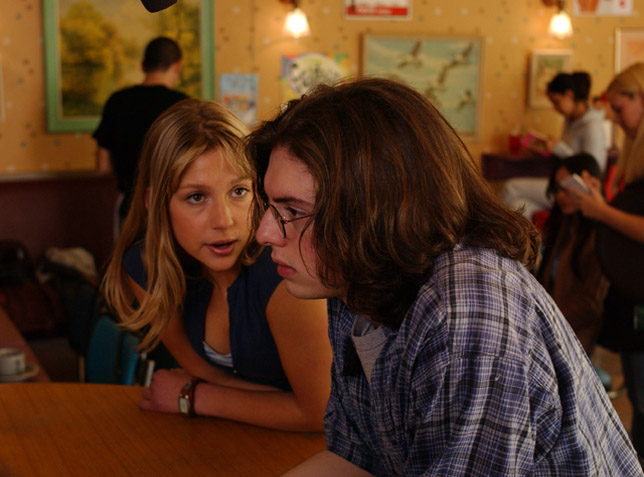 PLOT A SUMMARY:  Rick Murray returns to Degrassi, months after the incident that landed Terri in a coma.  Paige, Spinner and company are outraged, and Emma takes it upon herself to get Rick kicked out of school.  Rick tries to make amends with Paige, but she refuses to accept his apology.  Emma offers to help Paige pressure Rick into leaving Degrassi, allowing her to slowly slip into Paige’s clique.  They meet at The Dot, but Rick shows up.  Emma confronts him and tells him no one wants him at Degrassi, and throws him out of The Dot.

Emma and Paige begin a silent protest, supporting students against violence by selling ribbons to pressure Rick.  This campaign ultimately leads to Rick being harassed everywhere he goes at Degrassi.  Rick tries to give Emma a check worth his entire savings ($554.16) to the campaign, but Emma says that he can’t buy forgiveness.  He then says the donation can be anonymous.  Alex spots them and tells Rick to get lost, then rips up the check.  Emma blasts Alex for “not caring about the cause,” then Alex points out Emma knows nothing about the cause by asking if Emma’s had to witness her mother getting abused like she has.

Paige, Emma and the gang are hanging out at The Dot again when Rick walks in.  Paige starts to wonder if Emma is starting to feel sorry for Rick, and she insists that’s not the case.  Rick tries to talk to Emma, but she ignores him then trips him as he tries to leave.  With Rick visibly upset, Jay jumps up to grab Rick and drag him to the alley behind The Dot.  With a crowd of people watching, Jay breaks Rick’s glasses and punches him.  Alex steps up to hit Rick next, but Emma steps in and ends it.  The next day Emma tells Rick that just because she stepped in to help him it doesn’t mean they’re friends, then asks why he decided to return to Degrassi.  Rick says he came back because he liked the school and wanted to prove his haters wrong by showing them who he really is. 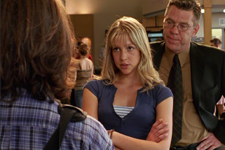 Mercy Street provides a very strong beginning for one of Degrassi: TNG’s most powerful storylines.  Degrassi crafts a story that does a brilliant job of showing all three perspectives: it’s just as easy to be outraged like Paige and the gang as it is to feel sorry for Rick, and be torn between both like Emma.  Emotions blur the line between speaking out against Rick and bullying him.  There’s so much irony within Emma and Paige’s silent protest: students in the hall sporting ribbons are doing so to support students against violence, yet they mercilessly harass Rick without question.

Paige and the others aren’t concerned with the cause, they’re only concerned with punishing Rick.  Emma’s focus is the cause, but it’s one she knows nothing about.  A tense scene with Alex exposes this, and is a preview of Deanna Casaluce’s talent as an actress.

But the only noteworthy flaw within this plot is a hole that gets larger the more you stare at it.  Why did Emma get in the middle this situation?  She obviously had a reason stay in it after Paige welcomed Emma into her inner circle, but there’s really no clear reason as to why she got involved to begin with.

While it’s really not that big of a deal and in no way hinders Mercy Street‘s progress, it does become a big deal when you begin to look at Emma’s character as a whole in Season 4.  Her actions are the driving force of this fantastic plot, yet it shows another erratic side to Emma, whose character seemed to be written with little to no focus in the opening episodes of such a crucial season.

PLOT B SUMMARY:  Liberty is having a hot tub party at her house with Manny, JT, Toby and Liberty’s little brother Danny.  Danny sets up an ironing board and JT tries to use it as a diving board.  While standing on it Danny yanks down JT’s pants, exposing his privates in front of everyone.  JT thinks Manny might be freaked out and tries to talk to her, but their conversation is interrupted when Craig walks by.  JT feels threatened by Craig and decides to talk to him while in the locker room.  While talking, Craig is getting dressed after a shower and takes off his towel, revealing that he has a “big package.”  JT feels inadequate, and Danny helps him by buying him a penis pump.

Manny is ready to break up with JT, but doesn’t know how to tell him.  JT invites her over after school and she agrees, planning in her head to finally break up with him.  When she arrives things are nervous between the two, and Manny leaves the room to “freshen up.”  While doing this JT breaks out his penis pump, and while using it Manny walks in on him.  Freaked out, she quickly leaves.  The next day JT apologizes and says he was trying to measure up to Craig’s size, but Manny says he’s not as mature as Craig because he’s always joking around…then Manny finally breaks up with JT.

If someone walks up to me and asks me about Degrassi subplots, this is one of the first ones that will instantly come to mind.  It’s one of the funniest and most memorable in TNG history.  Whoever thought of writing a story about a penis pump deserves all the awards.  JT, Toby and newcomer Danny do their job of providing a comedic subplot that brilliantly contrasts the heavier main plot.

But like the main plot, there’s an issue here that nags me:  the show never gives me a reason to care about JT and Manny as a couple to begin with.  I was one of those people who rooted, hardcore, for the underdog JT (or in his case, underDAWG) to win Manny’s heart in Season 3.  But while he was able to go to the dance with her, we were still unclear about what their status was.  We learn they’re dating when Season 4 starts, but soon after we learn Manny’s ready to break up.  They’ve had all these issues in their relationship, but those pages in the script probably got e-mailed to the Degrassi Bermuda Triangle by mistake.  Since their entire relationship happened off screen we were never given a chance “to ship or not give a shit” about them. I just don’t care that their relationship has fallen apart, and that Manny is too much of a coward to tell JT that she’s grown tired of his immaturity.  Instead, we’re left to be entertained by the “Three Musketeers” of Mercy Street: JT’s penis, Craig’s penis and the penis pump used to uphold the self-evident truth that all penises are created equal…and they do just fine.