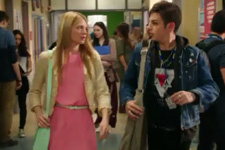 Becky’s brother Luke writes her a letter and wants her to come visit him at the juvenile detention center.  Becky doesn’t want to and dodges her moms pleas by saying she has band practice.  The “band” she’s a part of is called Prodigal Spoon, but Becky isn’t a part of it yet;  she has to audition.  She sings for the band’s primary member, Jonah, but he tells Becky she isn’t cut out for the band.

Later, Jonah tracks Becky down to return the letter from Luke she’d dropped while rushing out of her audition.  Jonah tells her he read the letter, and knows how mad she is at her brother.  He tells Becky the amount of baggage she’s carrying around can mess her up and recites the bible verse from Isaiah 43:25.  Becky finally reads the letter and still doesn’t want to go visit Luke until Imogen tells her she needs to release the anger she’s keeping inside. She finally visits Luke, and he tells her that he doesn’t blame her for turning him in.  Becky goes off on Luke, telling him her life sucks because of him and there’s nothing he can do to fix it.  Becky’s mom asks her if she’ll ever be able to forgive like; Becky doesn’t know at this point.  What she does know is that in the end Jonah asks her to be in the band.

GRADE: B-
QUICK REVIEW:  While he may wind up being a decent character down the road, Jonah was nothing special in his Degrassi debut.  I’m a sucker for the cheesy band archs Degrassi churns out every few years, but the Prodigal Spoon plot device never really grabbed me.  Jonah seemed to change his mind about Becky being in the band not because he had a legit change of heart, but because the show is going to eventually pair them up emotionally and (probably) romantically.  I’m looking forward to these two because of how much they’ll have in common, but their introduction leaves much to be desired.  The saving grace of this plot is the underlying arch of Becky holding in her emotions and pretending everything is okay, until Jonah and Imogen convince her otherwise.  Becky finally says what needed to be said to Luke, and now the healing process can begin.

Zoë pushes the power cheer squad as they prepare for competition, but Frankie feels Zoë’s pushing them too hard on two fronts:  nailing difficult moves and continuing to send nude Oomfchats for money.  As the cheerleading squad has doubts about their ability to win, Zoë takes the to see their competition.  The Newman squad performs a routine so good it makes the Degrassi girls want to give up…everyone except for Zoë.  She uses the Oomfchat money to buy new gym equipment so they can get better, and Frankie doesn’t like it.  Frankie feels Zoë is abusing her power as leader of the squad and not doing what’s in the best interest of the group.

Zoë vents to Grace, telling her about the squads rebellion and how she just wants people to stop looking at her as a victim.  Grace tells her she needs to stop behaving like a bitch, and also informs Zoë that Frankie is the only one on the squad who hasn’t been sending Oomfchat nudes.  Zoë returns the gym equipment and uses the money to suck up to the squad by buying them gifts and apologizing.  As planned, the squad decides to work with Zoë again and she continues to entice them with the thought of using the Oomfchat money to buy themselves personal items.  Zoë calls out Frankie for her lack of Oomfchatting and gives her an ultimatum:  either pull her weight, or quit the squad.  Frankie decides to quit.

GRADE: A-
QUICK REVIEW:  Degrassi’s young blood carries the weight of this episode with a compelling storyline on many levels.  I keep talking about how scary it is the amount of power Zoë has over the cheerleading squad, and she straight up played on their emotions to get them to return to her and turn on Frankie at the end of the episode.  From Frankie’s perspective this has been peer pressure 101:  she doesn’t want to be a part of Degrassi Nudes, but Zoë knows how to talk to (and intimidate) these young girls into anything.  It hurts that the squad was so quick to turn on Frankie, but kudos to her for doing what she felt was right in the face of peer pressure.

Zoë’s intentions are genuine, because at the heart of it all she really does want a fresh start and for people to stop looking at her as the girl who was sexually assaulted.  But it doesn’t excuse her reckless behavior and the fact she’s being a jackass, using her acting skills to manipulate others into giving her what she wants.

Eli can’t stand the fact Drew is always around Clare, but he winds up asking Clare on a lunch date.  Their date is interrupted by Drew, who shows up looking for Clare and has been calling her nonstop to check in on the baby.  Because earlier Clare had received a call from Drew and lied to Eli about it (she said it was a telemarketer), Eli gets upset.  Clare tells Eli that he’s going to have to accept the fact Drew is going to be around, bu Eli doesn’t know if he can do that.

While applying for a summer job at The Dot, Eli sees Drew walk in.  Eli confronts him and feels as if Drew ruined things with Clare.  Drew wants them to remain civil for Clare, but Eli punches him in the face.  Eli tells Clare he’s very mad at her, not Drew, then walks inside and is offered the job at The Dot.

GRADE: C
QUICK REVIEW:  With Drew/Clare/Eli, the various parts of this long-running arch have either been hit or miss…for me, it’s a miss here in There’s Your Trouble.  Everything seems to be a little too over the top.  Drew is overly concerned with Clare and the baby.  Eli is overly angry about the situation.  Meanwhile, you’ve got Clare Edwards in the middle, playing the role of Ms. Nonchalant in this bizarre triangle.  It’s going to be hard to gauge this entire situation because of how back and forth things are playing out.  In 1404 Clare was adamant about Columbia, etc., and now she’s cooled down and looks to be planning on taking a year off from Columbia.  Either way, we’re sitting around twiddling our thumbs as we wait for the plot’s most pressing issue to be addressed:  Clare’s ultrasound.

I know people pointed out that Spinner isn’t wearing a wedding ring in his cameo, but unless that is randomly addressed in a future episode I wouldn’t read much into it.  And I wouldn’t put it above Stefan to have Emma appear as well just to rub Spemma in our faces!

*Good job, Frankie.  Good for her for doing the right thing.  Speaking of that, I need to point out that this is similar to the concept of Becky Baker getting screwed over by her family when she told police what Luke did to Zoë.  In the most screwed up of scenarios where these girls are doing something bad, Frankie is made out to be the bad guy for doing what’s right.  Getting screwed over for being good is a very tough pill to swallow, and just another example of how crappy reality can be (despite how we’re TOLD the world should work).

*Grace is in the lead for season 14 MVP.  She’s definitely going to move up in the Power Rankings this week.

*I wish we knew how much these girls are making with Degrassi Nudes.  Next week we’re going to see them all show up to school with Gucci handbags and diamond iPhone 6’s!

*Becky’s walking better these days, but I’m hoping she wears that cast for a while.  It’s a nice little touch of realism just to have an injured character remain injured for a lengthy period on the show.  That reminds me…I still want to see a road-to-recovery storyline one day.

*”Don’t come crying to me when you’re ugly, old women who regret the time they turned down the chance to be high school royalty.”  Oh, Zoë.  Oddly enough there are probably people who think that being high school royalty is indicative of your value going into adulthood.  FYI: your status in high school means jack shit in the real world.