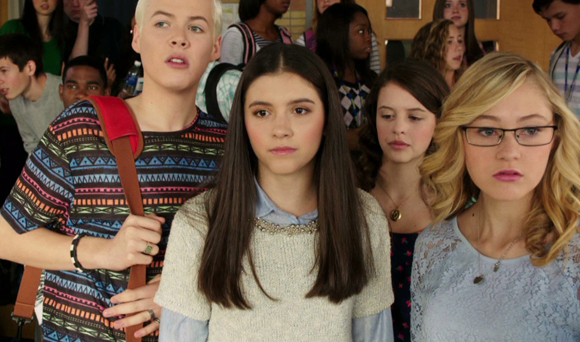 It’s finally here: Zoë’s sexual assault trial.  If you don’t want any part of the episode spoiled for you, don’t read below the line.  I’ll post TeenNick’s promo for next week’s episode tonight.  Unfortunately, the cancellation of After Degrassi means we’ll no longer receive 3 sneak peeks for the next episode.

As we’ll see, Luke’s lawyer will have the videos of Zoë’s sexual assault thrown out of court.  It makes my blood boil, but from a storytelling perspective it makes sense if you want to maximize drama.  With the videos present as evidence it would basically be an open-and-shut case.  The prosecutors can’t bring it up, but that doesn’t mean Becky can’t.  The suspense of this portion of the storyline all hinges on whether or not Becky will testify honestly, or protect her brother.

Despite not really working in the entertainment industry, Zoë Rivas is still a public figure.  She’s most definitely making a mistake trying to “take things into her own hands,” simply because of how easy it is for attorneys on the other side to take your actions and words and twist them around to fit their agenda.  I feel like it’s no coincidence that recently I watched a late-night news program about Michael Morton, a guy who spent 25 years in jail wrongfully accused of killing his wife. Why? Because the prosecutor had purposely withheld crucial evidence that proved his innocence.  How are we supposed to have faith that the justice system will work if it’s being manipulated?

And that’s where everything we’ve seen in terms of Becky Baker’s character over the past two seasons comes into play.  Even in last week’s episode, Out of My Head, she quickly and firmly said “I would never accept a bribe” when asked if Frankie’s mom had payed her to allow Frankie in the fashion show.

She’s been put in a crappy situation with her family basically pressuring her to lie under oath, but I’d like to believe that in the end Becky will do the right thing.

Now for the episode’s third plot…

Degrassi has sort of trained us over the years to assume when a storyline has been fully wrapped up, but in season 13 we’ve seen multiple storylines extended beyond that point; Zig’s plot has become one of them.  My jaw is still on the floor from seeing the return of Vince.  The gang was a pretty intimidating entity even when it was faceless on the show, but having Vince of all people as the face of this gang kicks it up a notch.  If you’re unfamiliar with Vince’s character, check out some key episodes from season 11 where he made Drew Torres’ life an absolute nightmare (Spring Fever, Idioteque, Should’ve Said No, Dead and Gone).  I’m just as excited for this plot as I am for the trial, because Maya won’t be able to say Zig the way she did before.