PLOT A SUMMARY: Clare can’t get her mind off Jake and his hottness, but doesn’t want to get serious with him because she’s afraid of getting hurt. She’s also noticing a change in her mom, who is starting to date again. Clare finds comfort in sharing her feelings with Jake, but even more so in making out with him. Clare learns Jake has decided to go to movie night with Katie, and Clare decides she can’t be involved with Jake anymore. She notices that her mom is breaking out of her uptight shell seeing someone, and Clare begins to think that being in a casual relationship with Jake might not be such a bad thing after all.

However, all that comes to a halt when she finds her parents’ divorce papers, and realizes that her dad had cheated on her mom. Clare realizes she doesn’t want to be in a casual relationship, and suggests that she and Jake take a chance and become something more. Later, Clare’s mom and Jake’s dad drop a bombshell…that they’re seeing each other. 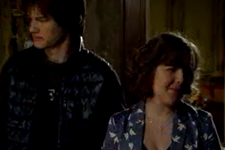 Cake is amusing on some levels, but I do not feel them at all…not in a relationship way or in a friends-with-benefits way. There are somewhat endearing moments when she’s pouring out her emotions to Jake about her parents, but even then I feel no connection whatsoever.

I was reading a comment where someone said that Jake was the biggest issue they didn’t like Cake as Jake because he causes her to act as off the wall as she does. Nah, I’m pretty sure Clare is the reason Clare is behaving so erratically. This reminds me so much of how ridiculous Ellie was acting when it came to Craig in season 5. Jake is just there, only contributing in emotionless fashion that he’s been in Clare’s position with her parents. I’m assuming that’s just his personality, but even then trying to make them connect on that level seems forced. Meanwhile, Clare’s trapping him and us in her whirlwind of emotions…it’s dizzying and draining.

I will admit the scene where Clare found the divorce papers was powerful. Forget Eclare or Cake stuff, this scene was a reminder of how much her parents split hurts her to her core. I like that part of it, but I’m bored with how the translation affects her love life.

I’m not sure what to make of Cake now that their parents are dating too. I just hope they can do something to make Cake interesting besides unintentionally funny scenes. By the way, did anyone notice that when Clare said the she and Jake could take a risk, Jake didn’t say anything?

PLOT B SUMMARY: Drew is still adamant about moving away, despite Adam’s objections. There’s a chance Drew’s dad could land a job in Boston. KC suggests that before running off Drew should try something different to take his mind off things…so Drew asks Jess to movie night. At the movie Drew spots a suspicious figure, and thinks it might be one of the gang members. He follows the unknown guy and finds out it’s Julian. Owen is there too, and the two guys begin sparring. Drew’s impressed by their fighting skills and asks to learn some moves. He decides he doesn’t want to move now, because he’s going to learn how to properly defend himself in a fight.

Besides the extremely random meltdown with Dave’s dad, I thought this was a fairly solid plot for Drew. He’s paranoia was believable. We saw how he was afraid Vince and his gang would come after him, and they did. And they said they were coming back for him again.

I laughed through the smokescreen of Drew wanting to move away…as if Degrassi’s gonna randomly ship off two major characters (Adam would leave too by default). I’m intrigued by Drew’s new-found hope that he can learn how to fight and defend himself.

So far Drew’s storyline has kept me interested and I hope it continues to do so, seeing how we know for sure it’s going to go through at least Dead and Gone.

PLOT C SUMMARY: Dave and Alli start talking again, and Alli wants to hang out. But of course there’s no way Dave’s girlfriend Sadie would just let him hang out with another female who’s just his friend, right? Instead of asking Sadie if it’s ok, Dave lies and say he’s gotta work with Adam on their radio show. Dave and Alli hang out at The Dot, and Dave’s feelings for Alli reappear at full force; Dave still likes Sadie, but now he likes Alli more. Dave decides to end it with Sadie during the movie, and she storms out while calling him a lying, cheating pig. After the movie, Dave confesses his feelings for Alli, who reveals she feels the same for him.

What are these mushy feelings inside of me? Am I……happy that Dave and Alli finally got together?

I’ve wanted to see them together since the days of Alli choosing Drew over him back in Season 10. Though both characters have gone through extreme ups and downs in my eyes over the last year (going from being awesome, to completely annoying), Dave and Alli’s characters are at a place now where they’re likable again and I enjoy seeing them together. They had more chemistry in one conversation than Cake did in the entire episode.

When it comes to Sadie, there really’s nothing Dave could’ve done that would be considered “right.” Thankfully they didn’t make it that Dave cheated on Sadie, but I don’t like how he waited so long to break things off with Sadie. He should’ve been straightforward about his plans to hang out with Alli to begin with, and he should‘ve broken things off with Sadie the minute he realized his feelings were stronger for Alli. But when it comes to the actual breakup, it was going to suck regardless of how it happened. Even being completely honest with Sadie about his feelings it still meant her feelings were going to be hurt. So I guess this means Sadie’s going to be dealing with her heartbreak by downing a pint of Kenyan ice cream?