DREW PLOT RECAP: Dallas and Drew receive a great grade on their business project, and Dallas thinks they should go into the party-planning business for real.  However, Drew shoots down the idea because he’s too distraught over being fired by Mr. Hollingsworth.  Realizing that he was wrongfully terminated, Drew tries to get his job back, but while pleading with Mr. H he accidentally knocks him into the pool.  A reporter catches the ordeal and gives Drew her card in hopes that he’ll give her details.  Later Miles tells Drew that he shouldn’t tell the reporter about Mr. H’s affair.  Mr. H thinks Drew is going to blackmail him for money, but instead Drew asks him for a letter of reference and a list of contacts.

“I only want what’s rightfully owed to me as a former employee…to help me move forward.”

I can’t believe I’m saying this, but for what seems like the first time ever, Drew Torres made a smart decision.

If I were 10 or 15 years younger, I’m not sure if I would like this storyline.  I’d probably be too consumed with “how bizarre” it is that Drew somehow attracts constant attention from the opposite sex, and how his inability to handle it is his downfall.  But as an old man (I’m 30), I enjoy what this plot presented in terms of how you should conduct yourself at times in the professional world.

It’s really simple, if you’re quitting a job or have been let go, do not burn bridges on the way out.  There are obviously exceptions to the rule, but in Drew’s case there was a way for him to ultimately get what he wanted without doing so.

We live in a digital age where people don’t hesitate to jump online and blast anyone and anything that annoys them, including their job.  I’ve even watched people I know constantly complain about their job and coworkers on social media. Why on earth would you do that?!?! As Spinner Mason once said, “There is no such thing as privacy on the web.”

It’s usually an emotional response that fuels that kind of action, which ties into what’s gotten Drew in trouble over the past two episodes (and basically all season).  I’ve stated it a million times, but Drew is obsessed with revamping his image.  He wants the world to see him as a good guy who isn’t a failure.  However, he’s so fixated on it that he fails to think things through…or in this case, he was over thinking things.  With Mrs. Hollingsworth he jumped the gun on a situation that Mr. Hollingsworth had no idea about, and honestly I don’t think Frankie or Mrs. H would’ve said anything.  The way Miles told Drew about how his dad’s affair doesn’t need to be publicized shows the Hollingsworth family is well trained in the art of keeping secrets.

And when you think about it, what exactly would Drew have gained by telling the press about Mr. Hollingsworth’s affair?  Even when talking to Drew, Mr. H was in politician mode the entire episode.  A scandal would ruffle some feathers, but Mr. H has more than enough power to crush Drew’s ability to obtain a meaningful career before he even graduated high school.

Drew simply asking Mr. H for a reference letter and contacts is the smartest move this kid will probably ever make.  I work in an industry where people switch jobs pretty often, so who you know and the connections you make are everything.  It’s good to see a plot that shares an idea even adults can learn from.

On a side note, kudos to Drew and Clare for actually listening to each other long enough to resolve their differences.  As expected, it was one of those situations where the two weren’t going to accomplish anything until they had time to cool off and think things through.  And with him having completed yet another arch, I can hear sighs of relief everywhere as it looks like the Drew Torres rollercoaster has come to its final stop in season 13.

BECKY PLOT RECAP: After spending most of her time online, Becky is ready to meet Sir Excellence in real life.  However, she’s disappointed when she finds out it’s Hunter, Miles’ 9th-grade brother.  Hunter is heartbroken when Becky calls things off, and once the two finally meet IRL he yells at her for ruining everything.  Becky decides it’s time for her to finally talk to her family and tell them how she feels.  Becky’s mom tells her that their family needs to stick together, and that Becky needs to stand up for Luke during the trial. 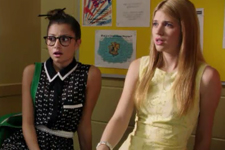 The primary thing I wanted from the plot was for it to intensify my excitement for the upcoming trial; it did just that.

We know that Becky is basically being punished for being honest after turning in her brother Luke, but what’s interesting about this entire situation is the overlap between Becky and Hunter.  You’ve got two characters whose lives suck, and they find comfort in each other online.  In my experiences in the online world, people nowadays grow close friendships that sometimes expand into people meeting and becoming close in person.  However, Hunter is dead set against that.  One of the cool things is we don’t really need much insight into what’s driven Hunter into Realm of Doom, because it’s been established through other plots that his family is secretly a trainwreck.  “Real world people always disappoint,” Hunter says to Becky.  “Online, I’m a hero.”

His obsession with escaping online gets Becky to realize that she’s a bit too reliant on Realm of Doom, and finally talk to her family.  However, Mrs. Baker is even more infuriating than in How Bizarre as she asks Becky to protect Luke at the trial.  “We both know he didn’t do anything wrong,” Mrs. Baker says.  Kind of like how some parents refuse to believe their kid is the bad one when they get in trouble at school, the Baker parents’ behavior screams that they’re in denial.  The overall sexual assault plot was based on the Steubenville rape case, so the hope is Degrassi will follow through on how that trial turned out.  But it’s still a disturbing reality to know the people you love and trust may pressure you into going against what you believe is right.

ZIG PLOT RECAP: Gang watchman José sets up a meeting between Zig and his mom, who haven’t spoken since Zig was kicked out.  However, Zig is too nervous and bails on the first meeting.  After his fear starts affecting his job performance at the restaurant, Zig meets his mother at Maya’s house.  Zig prepares dinner for her, and the two reconcile.

At long last, we finally learn why Zig was kicked out of his house.  He was selling drugs out of his parents’ store, and one day someone went to the store looking to rob Zig.  However, Zig wasn’t there…his mother and little brother were.

Now Zig’s scared that his mother won’t forgive him.  Similar to Becky’s plot, Zig’s now turns into a scenario where he’s using an activity (his job) as an excuse to avoid confronting his issues.  But unlike Becky’s parents, Zig’s mom listens.  It’s a heartwarming scene as Zig serves his mom dinner, and she sees he’s trying to change.  My favorite scene in the entire episode though happened in the kitchen between Zig and the no-nonsense chef.  Zig let his personal issues bleed all over his job, and the chef realized that.  She showed compassion by calming him down, but still kept it real with him.

“Small kitchen, there’s no room for your baggage,” she says.  “You got issues with someone you take it out on them, not me.”