Quick Recap: Miles’ father still sees him as a disappointment after catching Miles and Maya skinny dipping in the Hollingworth’s pool.  Everyone tells Miles in order to win his father’s approval, he just needs to work harder for it.  Miles then decides to organize campaign material for his dad with the help of Winston and Maya.  Miles wants to show off his hard work to his father, but finds his dad flirting with his attractive campaign manager, Andrea.  In order to discover the truth, Miles decides to send Andrea a necklace and a card, signing the card with his father’s name.  During the family’s media training session, Andrea finds the gift and is flattered, confirming she and Mr. Hollingsworth are having an affair.  Miles makes a scene then walks out of the meeting; he tells his mom about the affair, but to his dismay she already knows and has been keeping it a secret in order to protect the campaign. 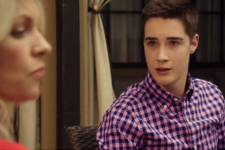 We get a closer look at Miles’ home life, and it’s quite shocking how much of an outcast he is within his own family.  “You two are shining examples for your older brother,” Mr. Hollingsworth says to Miles’ younger sister Frankie and younger brother Hunter.  Normally the eldest sibling is generally regarded as the one who sets a positive example for their younger siblings.  The Hollingsworth parents value and praise Frankie and Hunter because they “know their role” so to speak when it comes to the mayoral campaign: the campaign always comes first.  The stigma within the family is that Miles is a screw up whose behavior jeopardized a past campaign, and now his father has no qualms about shaming him for any perceived wrongdoings.  Miles’ mother, though not verbally abusive like Miles’ father, shows little compassion toward her son.  “Try harder,” is the only thing she says in response to Miles asking her what he should do to show his father that he’s not a bad kid.

What makes things worse for Miles is the damaging secret he discovers within his own family.  Mr. Hollingsworth goes around berating Miles for his “embarrassing behavior” because, for the sake of the campaign, Mr. H. wants his family to be perceived as perfect, even in the eyes of his campaign staff.  However, Mr. H. engages in infidelity while he demands his son maintain a certain level of decorum.  After walking out of family media training, Miles’ discussion with his mother is disturbing.

“It’s not your problem,” she says after Miles tells her that Mr. H. has been unfaithful.

The nature of politics is one shrouded in secrets and deception, and everyone in the Hollingsworth family (excluding Miles) refuses to break character until the election is over.  “We will deal with it after the election,” Miles’ mom says with no emotion, after Miles asks “Why are you playing along with this stupid charade?”

“Why don’t you take a walk? I’ll tell them you weren’t feeling well,” she continues, as Miles angrily walks away.  If there’s love within the Hollingsworth clan it’s hard to tell.  The irony of his mom’s lifeless response there and the fact they’re having a family media training session shows how deep the Hollingsworths are in the political world: they’re virtually machines now, with a trained response to everything.  And that’s why we see Miles clinging tightly to Maya at the end of this episode, professing his love for her.  It’s a genuinely touching scene involving a young man who expected to find love within is family, but reality says otherwise.

Expectations vs. reality can be a very difficult thing to balance at times.  We as Degrassi fans set certain expectations months ago when it came to Miles Hollingsworth.  After the first time we saw Miles and Mr. Hollingsworth interact, I’m assuming a lot of us expected to see an intensely-abusive situation play out similar to Craig Manning and his abusive father in season 2.  For the time being that doesn’t seem to be what’s going to happen here with the Hollingsworths.  We’re not seeing Mr. Hollingsworth beat down Miles until he’s black and blue, but it doesn’t discount the sad dynamic of this dysfunctional family, one in which Miles is clearly on the outside looking in.  The idea of a kid who simply feels unloved by his family is sad in its own right.

CLARE VS. HER “URGES”

Quick Recap:  To celebrate being cancer free for six months, Clare decides to book a day of bungee jumping for herself, Eli, Jenna and Connor.  However, Eli can’t make it because he’s working on a short film at NYU.  Connor decides to invite Drew instead, but the move makes Clare nervous because of the kiss they shared on Thanksgiving.  Clare and Drew wind up doing a tandem jump, and have a great time.  Afterward, the two change clothes in Clare’s car and she finds herself staring at Drew while he’s shirtless.  While obviously physically attracted to him, she declines to hang out with him after bungee jumping and tells him to catch a ride home with Jenna and Connor.

The Eclare/Clew drama that’s been brewing since Black or White has been like one giant game of “Show and Tell,” minus the “show.”  We learned Eli cheated and we saw Clare kiss Drew, and since there was no real discussion between Eclare afterward about any of it we now assume everything is peachy (excluding the long distance and Eli’s busy schedule interfering with current plans).  The lack of “show” creates an even bigger issue when it comes to Clare and Drew, with Degrassi simply wanting to “tell” us that Clare is lusting after Drew now.  We know that these two have spent a lot of time together since the start of their senior year because of student council.  However, over the past six episodes we’ve jumped from Clare spontaneously jamming her tongue down Drew’s throat, to showing no interest in Drew, to now longing for his loins yet also wanting to avoid interacting with him.

Why is Clare suddenly awkward about being around Drew, given the fact they’ve interacted in the four episodes before this one with no issues or hints on her end?  It makes about as much sense as Dallas declaring that his son Rocky is now the main priority in his life, Rocky dropping off the face of the planet with minimal mention of his existence, then randomly appearing out of nowhere in this same episode where Clare finds herself resisting the temptation of Drew’s shirtless self.  There’s an important thread here where we see Clare being strongly attracted to someone else, and wanting to protect herself from doing so because she’s already in a committed relationship.  One could argue that Eli bailing triggered the same feelings in Clare that made her run into Drew’s arms before, and she’s terrified it will happen again.  But this whole scenario would make more sense if there’d been some effort to create a consistent string of relevant interaction between Clare and Drew to begin with, instead of having these feelings suddenly pop up after having spent a handful of episodes focused on life from Drew’s perspective.

Similar to a former character such as Owen Milligan, Rocky is a “character of convenience,”  but Clare’s plot here shows that apparently that theory now applies to characters’ feelings as well.

DALLAS VS. ALLI’S PAST

Quick Recap:  Still working on their science project, Dallas loves how well Alli gets along with his son Rocky.  At school Dallas presents Alli with a gift basket and asks her out, but she says she can’t and walks away.  Dallas goes to her house to explain himself, and Alli confesses that she’s not over the physical and mental abuse her relationship with Leo caused.  The revelation leaves Dallas furious and wanting to seek vengeance on Leo.

Dallas’ crush on Alli is endearing, even as he’s completely clueless to Alli’s current state of mind.  All he knows is that Alli and Leo broke up, and now is his chance to swoop in on the girl of his dreams.  However, the vastly different realities of these two characters clash when Dallas finally asks her out.  Alli might be flattered by the gesture, but she also has zero interest in him.

Alli didn’t owe him an explanation as to why she didn’t want to go out on a date, but her revealing why does point out the fact when you’re rejected by someone it’s not necessarily about you.  Alli’s biggest concern is Alli at the moment, as it should be.  You know she’s still nowhere near ready for any kind of relationship based on her facial expressions during the scene where Dallas asks her out; she’s visibly uncomfortable with his romantic advances.  This episode leaves things up in the air with Dallas angry at the news that Leo abused Alli.  “I could crush him,” Dallas says.

“Yeah, but that wouldn’t change anything,” Alli says.  This statement sticks in my mind as Dallas seems intent on taking some course of action on his own.  Alli also specifically mentioned that Leo was full of anger and hate, suggesting that any aggressive retribution Dallas is thinking about dishing out could completely backfire if he’s attempting to be Alli’s knight in shining armor in this situation.