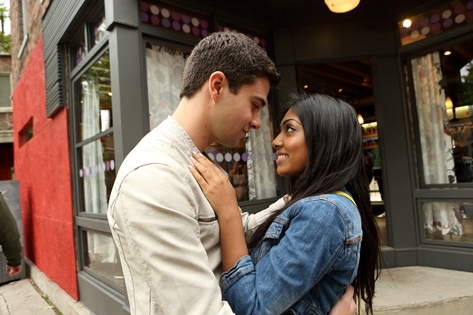 After yesterday’s announcement that Degrassi is moving to MTV Canada, the network released its description for the fall premiere episode, This Is How We Do It (not “Creep” as recently reported…we now have no clue why TeenNick labeled it that).

***************
In the DEGRASSI fall premiere episode, “This Is How We Do It” (Oct. 3), Degrassi’s back in school. Student Council President Drew wants to make sure everyone has a positive year after the devastating loss of Adam. But it’s easier said than done when he’s battling insomnia. Zoë is about to tackle her greatest role yet: “Zoë Rivas, Degrassi Student.” But when you grow up on a film set, how do you know what’s cool in the real world? Alli wants to spend her senior year with her best friends but when Leo flies to be by her side, it’ll take some convincing for the group to accept him as her new BF.
***************

*************
The digital short series follows Eli Goldsworthy (Munro Chambers) in his adventures after graduating Degrassi. It’s a big, insane, and exciting world out there and Eli’s about to discover that sometimes being at university in New York City is as different, strange, and amazing as living on another planet.
*************

The very first digital short will be posted on MTV.ca on THURSDAY, SEPTEMBER 26th.  These will be spread out over the course of the next year.  For fans outside of Canada there’s a bit of fantastic news…the short will also be posted on Degrassi.tv!  Yes, it looks like Epitome has revived the old Degrassi site and will hopefully use it a hub for Degrassi-related stuff.

As far as the Eli shorts go, I’ve mentioned time and time again about how I’m not a fan of the college thing/following characters outside of Degrassi.  However, with webisodes they require more concise storytelling.  My hope is that it’s a companion piece that eventually connects the dots to what will ultimately be the fate of Eclare once everything’s all said and done.  We’ll see.