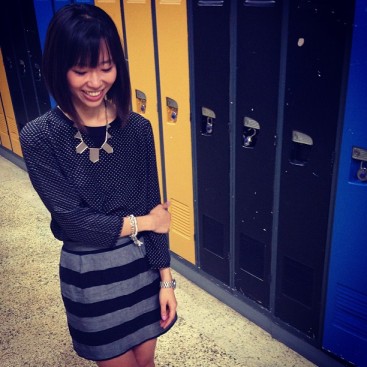 Abby Ho, Epitome’s Director of Digital and Social Media, has announced that she’s leaving the company.  Today is her last day.

My last day at Epitome. I'm going to miss everyone! I have had the most amazing 5 years working on… http://t.co/vflrfl8iYz

After five year of working on Degrassi, she’s taken on a new position at CBC.

Abby has been an extremely crucial part of the development of Degrassi’s online presence over the past few years.  It went from being virtually nonexistent to content being posted on a near daily basis.  The unique part of it is that Epitome took its own social media efforts in its own hands as opposed to relying on weaker, robotic efforts by the networks.  Granted there are certain circumstances and limitations for the networks that come into play, Epitome establishing its own team that solely focuses on digital content (as well as the benefit of the team working on the set) gives us access to things we wouldn’t get otherwise, such as the character twitters, apps, behind-the-scenes videos and the Google+ Hangouts with the cast.

The rest of Epitome’s digital team (Krista, Will, etc) is still there, and they will still continue to provide behind-the-scenes content.

Abby you will be missed!