For all of commotion that the prior episode Honey caused, casting a dark cloud over the faith of many outraged Degrassi fans, things seemed to briefly spin around in Young Forever, which is clearly the best overall episode of season 13 up to this point. Young Forever is one of the few Degrassi episodes where there aren’t multiple storylines happening.  We see the perspectives of various characters (Drew, Becky and Clare), but ultimately everything in the episode is centered around mourning the death of Adam and honoring his memory.  This episode will only have one grade, but I’ll recap each perspective individually.

DREW: Devastated by the death of Adam, Drew lashes out at Becky at Adam’s funeral, blaming her for his death.  Neither Dallas nor Bianca can console Drew, who wants to be alone and takes off.  While wandering the city Drew watches a tribute video Eli and Clare made and sees how happy Adam was with Becky.  That night Drew shows up at the memorial bonfire where he apologizes to Becky and refuses to say goodbye to Adam, because he will always remember him.

BECKY:  Becky plans a memorial for Adam because she wants Adam to be remembered.  She gets help from Jenna, Alli and Connor setting it up, however no one shows up.  Just when she’s about to tear everything down a large group of people show up, led by Dallas, Bianca, Imogen and Dave.  Drew arrives at the memorial that night and apologizes to Becky for snapping at her at Adam’s funeral.  He asks her what they should do next, and she says they should make Adam’s death mean something.

CLARE:  Unable to attend Adam’s funeral, Clare can’t find the right words to say to Adam on his memorial page on Facerange.  Instead, she comes up with the idea for her and Eli to create a tribute video for Adam.  While browsing through video footage, Clare learns that her cancer has gone into remission.  As the time for Clare and Eli to leave for Adam’s memorial approaches, Clare tells Eli that she can’t go:  she feels guilty that she survived while Adam died, but Eli comforts her and the two eventually head to Adam’s memorial.

What you instantly notice about Young Forever is how thoughtful and planned out the episode feels.  The episode has a very clear goal, which is to remember and celebrate Adam’s life, and it never strays from that.  Even Clare’s cancer going into remission takes a backseat, as she begins to experience survivor guilt.

Everyone executes their role on point.  Luke Bilyk’s fantastic acting in Honey carries over into Young Forever.  It’s heartbreaking watching him in a position where he’s not okay emotionally, and there’s nothing anyone can do to help him, not even Bianca.  Sarah Fisher is also strong, as well a Demetrius, who’s mastered Dallas as a strong support character.

Continuity can be an issue on Degrassi at times, but the show gladly accepts the challenge in Young Forever, as little things go a long way to making this episode feel natural.  From having characters who are no longer regulars (Bianca and Dave) make a guest appearance, to having other characters who couldn’t appear send their condolences digitally (Mo and Fiona), Degrassi hammers home the idea that Adam really did leave a huge mark on the people around him.  This episode is full of tear-inducing moments as the Degrassi community comes together to remember one of its own. 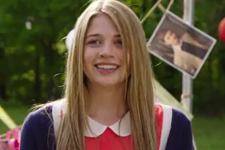 The awkwardness of Honey left a foul taste in the mouth’s of the show’s fan base, who believed the show was treating Adam’s death as if it were a joke.

We get quite the opposite here, as Young Forever seems to carefully craft an entire episode with more authenticity and detail than what we could expect to see in any given standard episode.

While Degrassi generally gives a lot of its characters sendoffs nowadays, very few in the history of this franchise have had the luxury of a sendoff episode so thorough and intent on celebrating said character’s legacy.

In case you were wondering…

In my review I mentioned enjoying the little moments of continuity that popped up throughout the episode…here’s a list of my favorite “little moments” that made a big difference:

*Bianca asks why the doctors couldn’t save Adam, and Becky delivers exactly the kind of response you would expect: “I guess Jesus just wanted him close.”

*Becky’s at the funeral with no knowledge of the fact Adam was trying to contact her when he crashed (until Drew tells her).

*After the funeral, Alli receives a text message from Leo, which she promptly ignores.

*We get a shot of Clare’s computer and see Mo has written his condolences on the wall of Adam’s memorial page on Facerange.

*When Drew’s at home after the funeral, he’s sitting there playing video games (one of Adam’s favorite activities).

*Eli and Clare browse through footage of Adam impersonating Clare for the #StuffClareSays video that was made last year.

*Dallas walks up to the memorial with a skateboard, while Dave walks up with headphones in hand.

*Eli references the party Adam threw for Fiona in the season 10 episode “Halo.”

*Just as Mo did, Fiona also sends her condolences by posting on Adam’s Facerange page:

*In a tribute video where Adam is asked where he’ll be in 10 years, Adam references the time he hit on Bianca in “My Body Is A Cage.”

Below are the thoughts I originally posted before reviewing this episode:

I honestly can’t come up with anything thoughtful about everything that’s transpired in the last episode, as well as the reaction of the fandom since.  There’s just too many different moving parts to address, and I don’t even know where to begin putting them all together in a way that makes for a coherent analysis of what’s happened.

There are things we have no clue about that influenced decisions made.  There are things that should’ve been handled differently.  I’ve spent the past week regularly reading the thoughts swirling around the Degrassi fandom.  That in itself is draining.  There’s still a lot of emotion.  There are people from many angles making valid points about their position.  There are also people posting absurdly-irrational thoughts to the point where their message is lost in the noise they’re spouting.  Epitome’s getting ripped a new asshole by its own fandom, but the fact that filming is on a hiatus couldn’t have come at a better time if they were planning to hide from the fandom’s wrath.

In terms of where Degrassi should go next, I’m not really sure.  Degrassi will return to “business as usual” when it returns in the fall, but what about the future?  Yes, there should most definitely be another transgender character on the show.  There’s no denying being frustrated, thinking about all of the things they could’ve covered with Adam, but didn’t.  For the love of God, we found out while he was in the hospital that he’d finally started his hormone treatments.  However, I think it’d be ridiculous to add one so soon after Adam’s death (this is in direct reference to an insightful, must-watch video by Lyra, a trans* woman, where at one point she demands the show add one within the next year).  The perception is that Degrassi hastily killed off Adam, so why on earth would we want them to hastily write another trans character into the show in what would come off as a move simply to appease those outraged by Adam’s death? (Unless bringing on another one is part of a plan they’ve already thought about or are putting in motion…remember they’ve already written a huge chunk of the 32 episodes that remain in season 13 after this block. If that’s what they’re doing that’s fine, but I’m saying they shouldn’t up and alter whatever it is they’ve planned to force a new trans character into the fold).

Sometimes the show has a clear direction for where they want to take new characters (ex: Cam), but many times they introduce characters, then decide whether or not to expand their roles/give them storylines for various reasons.  Degrassi cannot afford to add a trans character to the show just for the sake of having one.  They must be a character with a purpose, because with how conscientious viewers will be with any trans character introduced from this point forward, there won’t be any room for error.  For now, I hope they were serious when they said Adam will “have a huge impact on our Degrassi community” as the season progresses.