I’m having a difficult time describing my thoughts about the episode “Honey.”  As a whole (combining all three plots to create an episode), it’s a very awkward episode.  I’m not one of those people outraged that Adam wasn’t the primary plot of this episode, but what is disturbing is that the summer’s weakest storyline was placed in that position to carry the episode.

When it comes to my reviews, I do NOT grade the episode as a whole.  I always look at each plot within the episodes individually and grade them on their own merit (unless there’s intentional crossovers in the storylines).   While “Honey” as a whole isn’t even close to being one of the show’s most memorable episodes (which is disappointing given that a major character dies), there are still certain strong points within the individual plots. 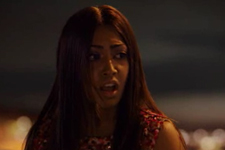 ALLI PLOT REVIEW:  In what has clearly been the worst plot of season 13 so far, it feels like a cruel form of irony that it would be the headlining plot of “Honey.”  With Alli leaving Paris in days, she tries to talk to Leo about their relationship, but he assumes she wants to break up.  After a discussion with Clare, Alli storms over Leo’s place to make the most of their final days together.  The two end up rolling around in the sack together (literally), until they’re interrupted by Leo’s grandparents.  Before Alli leaves she finds out that Leo has a godfather who lives in Toronto, and that he wants to transfer to Toronto University so he can be close to her.

After sharing a romantic moment on a bridge, Alli checks her phone.  She sees it’s another text message from Dallas, whose been texting her all summer and can’t wait to see her when she returns from Paris.  Leo sees the text and becomes jealous, forcefully grabbing Alli by the arm.  She pushes him away and he storms off.  Alli tells Jenna about what happened and blames herself for what happened; she’s heartbroken and ready to leave Paris behind.

The downfall of Alli’s storyline has been that there’s been no reason to be invested in Alli and Leo as a couple.  Alli may have learned her lesson with guys and wanted to take things slowly this time around, but that philosophy flew out of the window in an instant in this episode, where suddenly the two are in love and Leo’s making plans to move to Toronto.  This is sandwiched between two very abrupt lapses in communication.  When she firsts talks to Leo he assumes she wants to break up and he walks off, and Alli allows him to do so mid-sentence as if she couldn’t just grab his attention and spit out what she wanted to say.

Later, Leo sees the text and assumes Dallas is a guy Alli’s seeing back home.  He’s angry to the point of grabbing Alli forcefully, but I’m not sure what Degrassi is trying to imply here.  Is Leo a guy who is potentially abusive, or are you displaying how people in different cultures may react differently to a situation?  The only reason I bring that up is because of how Leo not knowing that Alli was using “get out” as a figure of speech.  Either way, the breakdown in communication between Alli and Leo throughout their relationship always seems to be a thing of convenience for the sake of causing drama.

While Alli’s plot was too weak to carry the episode, there is one bright spot:  Dallas.  I loved the subtle continuity of Dallas sending texts to Alli all summer.  What seemed like a very minor thing actually turned out to be the crack that sank Alli and Leo’s ship.  If only their relationship had been as clever or interesting.

MAYA PLOT REVIEW:  The students are going on a trip to a fancy restaurant in Paris, but Maya has nothing to wear.  In order to one-up Zoë, who insulted Maya’s fashion earlier, Maya purchases a very expensive dress using her mom’s credit card.  When Maya arrives at the dinner, she’s seated next to Zoë, who notices that Miles is checking Maya out.  Zoë then “accidentally” dumps her drink on Maya’s dress.

Later, Miles tells Maya and Tristan that he’s no longer with Zoë because of what she did, but that Maya should watch her back because Zoë is convinced Miles likes Maya.

With the departure of Tori Santamaria, it’s great to see that Maya and Tristan’s friendship carries a similar level of cuteness and authenticity.  Very little happens in this plot in terms of actions or consequences, but the plot does a good job of setting the Maya vs. Zoë feud that will continue once the characters in Paris return to Degrassi.  What little we’ve seen of Zoë’s character has been her being condescending and catty, doubly so toward Maya.  The expression on her face staring at Maya after Miles broke up with her is priceless, one someone has when they have plans of exacting revenge.  We know Zoë can be a heartless bitch, the question is whether or not Degrassi will keep her that way.

DREW PLOT REVIEW:  Tensions are high as Adam clings to life in a hospital bed after his car accident.  The story receives an excellent touch with a brief conversation between the doctor and Audra, as she explains to him that Adam is transgender.  The Torres family learns that Adam needs surgery because he suffered severe chest trauma.  As the Torres wait in Adam’s room for news about the surgery, an anxious Drew decides to briefly head to Degrassi summer camp to get his mind off things.  While there he receives get-well cards from the kids.  Still unable to think about anything but Adam, he decides to return to the hospital to decorate Adam’s room with the cards, and Dallas joins him.  Drew’s parents return to the room speechless, and Drew realizes from the look on their faces that Adam didn’t make it.

As short and “buried within the episode” as this felt at times, the moments we received in regards to Adam’s accident in this episode were excellent.  Any time this plot came on my heart rate rose, and every time the episode switched to something else I sat there in limbo, impatiently waiting to find out how Adam was doing.  What if that was the point of having such little time devoted to Adam? What if we were supposed to be left in the dark, anxiously sitting around just as Drew and his parents had to do during the episode?

Luke Bilyk hits all the right notes in this episode, delivering a great sense of fear and restlessness as Drew remains hopeful that his baby bro will be alright.  The support characters are also excellent.  While Dallas wonders why Drew is at camp and not the hospital, Imogen immediately realizes that Drew is there because he needs a distraction, and she accommodates him.

The final scene of the episode is beautiful shot.  Audra and Omar stand in the doorway, both carrying blank stares that sum up the emptiness a parent feels after losing a child.  The tearful embrace between mother and son is difficult to watch.  There are parallels between Dallas and the viewers.  As the Drew finds out about Adam’s death Dallas walks out of the room, sharing the same expression of shock as those of us watching.  We then share the same perspective as Dallas, as we watch the Torres family in mourning as the hospital room door slowly closes.  While it may be easy to focus on what wasn’t (the lack of screen time for the plot in this episode), let us also not forget the beauty of what was.