PLOT A SUMMARY:  During the final seconds of a hockey game, Cam tries to go for the game-winning shot by himself and fails, causing his teammates to be mad at him.  The next day Maya, Tori and Tristan tell Cam he needs to take a break from hockey and hang out with them so he can stop feeling down on himself, but he declines because he can’t miss hockey practice without a good excuse.  He vents his frustrations to his mom via video chat, and she reassures him that things will be okay.  Cam overhears the rest of the hockey guys talking about him, and he chugs an entire carton of milk before entering the locker room.  He gets sick in front of everyone and blames it on the flu, and Dallas excuses him from practicing.  That leaves Cam free to go hang out with Maya, who convinces him to sing karaoke.

Dallas and Luke find out Cam lied about being sick after someone posted a video of Cam singing karaoke, and they make him do sprints on the ice until he’s exhausted.  Dallas reminds Cam that he can’t bail on the team and that they’re all he has…alone in the locker room Cam tosses his skate, and realizes that he cut his hand doing so.  During the next game Cam scores the game-winning goal, but afterward he freezes from fear when the press wants to interview him, so Dallas talks to them instead.  They next day Maya is worried because Cam isn’t responding to her text messages, and no one from the team has heard from him since the game.  She eventually finds out where he lives and visits him as he’s packing because he wants to go home.  He tells her that he’s sad and doesn’t know how he can make himself happy, and Maya suggests he try to balance hockey with other things.  At Degrassi Cam sits on the ledge of the catwalk and intentionally throws himself off, injuring his arm.  He finds out that he’s going to be out of hockey for six to eight weeks, and when Maya gets suspicious he denies hurting himself on purpose.  Maya asks Cam what he’s going to do when he has to return to hockey, and Cam responds by saying that he’s happy right now.

The level of intensity dedicated to Cam’s anxiety is so fascinating that it’s overwhelming.  Dylan Everett does a phenomenal job of portraying someone who feels trapped and confused in the raging sea of his own emotions.  The part that keeps this storyline so engaging is the fact that there’s no small reason for Cam’s anxiety, and there‘s no simple solution for it either.  It’s been hammered into our brains that Cam is homesick, and despite being a talented hockey player, he’s simply unable to handle the pressure and responsibilities beyond being on the actual ice.

But with that said we still don’t know the root cause of his breakdown beyond it being tied directly to the pressure he feels because of hockey.  There’s always this lingering feeling that there’s more to it.  When it came to him being punished for skipping practice it was hard to feel bad for him in that moment…I mean he did blatantly lie after all.  However, it’s difficult to not empathize with him because as this episode progresses, he become more desperate and takes to more extreme measures to get out of playing hockey.  Anyone that says they thought Cam would actually jump off the ledge is lying; kudos to Degrassi for pulling off a rare go-there moment that surprised everyone. 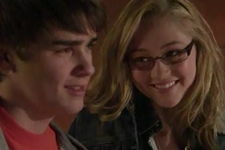 With Cam unable to play hockey for weeks we may see him level out, but as Maya mentioned he will have to return to hockey eventually.  When Eli was struggling with his issues during various parts of Seasons 10 and 11 his emotions were like a bomb, they’d go off and would affect everyone close to him.

With Cam his emotions are just as terrifying, but heartbreaking in a different way because he’s dealing with them secretly.  If suffering in silence isn’t something we can’t all relate to, then I’m not sure what is.

PLOT B SUMMARY:  KC is worried that his dad, fresh out of jail, will drag down his mom again.  KC and his dad Kevin meet up and Kevin is proud of what KC is done despite not having a supportive father around.  Kevin asks KC to help him put together a resumé so he can get a job, and KC agrees.  During academic quiz team practice KC receives and “emergency” text from his mom, but comes home to find out it was good news:  Kevin got a job at a restaurant.  They celebrate with wine and KC freaks out because his mom promised she would never touch drugs or alcohol again.  KC is disappointed with his mom, but she tells KC that Kevin has been banned from being at their place.  While KC and his mom are talking, Kevin bangs on the door, obviously intoxicated.  KC tells his mom to hide in her room and KC calls the police.  At school KC meets with Jenna to tell her that he’s moving to Vancouver.  His dad has to stay in Toronto because of his probation, and KC says the move is to protect himself and his mom from Kevin.  Before he and his mom drive away, KC says goodbye to Jenna, Clare, Alli, Connor and Bianca.

I feel KC’s final plot was an appropriate one, given the fact it’s a climax for one of the two major story arcs for his character since Season 8.  It was predictable in that we all knew KC’s dad would get back into drugs or alcohol upon them finally reuniting, but what was truly impressive was how KC stuck to his guns when it came to his mom’s promise of no drinking alcohol that she made years ago.  From the second Kevin pulled out that wine bottle, KC’s behavior was thoroughly consistent with the way he acted like a terrified young boy when his mom first came back into his life in Better Off Alone.

KC leaving feels abrupt, but what could they do, maybe extend it another two episodes before sending him packing at best? It reminds me so much of how Sean Cameron made his abrupt exit in the Season 4 episode Back In Black.  That feeling is enhanced by the lack of advanced warning that Sam Earle’s character would be written off the show.  Degrassi keeping that major plot point from being totally exploited beforehand is impression in itself, especially in an area where we know too much about everything before anything airs.  Here it feels as if the emphasis is on getting the emotional payoff with the element of surprise as opposed to a balanced story…the strategy works.  It’s disappointing to see KC leave, but at this point it’s never shocking when someone is written off of Degrassi…I mean, they’ve already written off an ENTIRE generation of students after all.

PLOT C SUMMARY:  Fiona wants to celebrate “Fiona Coyne Day” by hanging out with Imogen at her place, but when Imo says they can’t they do so at Fiona’s condo.  As they’re making out Drew walks in.  Fiona gets mad because she has no privacy, and also because the condo is a complete mess.  One a later day, Fiona arrives home while telling Imogen she’s looking for a new roommate because she can’t take living with Drew.  Drew walks into the room revealing he’s cleaned half of the condo, and left the other half intentionally dirty for Fiona to clean.  Fiona gets upset because she doesn’t know how to clean since she’s always had her mom or maids to do it for her, so Drew teachers her how.  In class Fiona tells Imogen that her and Drew worked things out, and she wants to finally hang out at Imogen’s house, but Imogen declines.  Fiona feels likes Imogen doesn’t want her over, and instead of explaining, Imogen just says Fiona can’t come over because of “bad timing.”

As we all continue to watch what is considered the fall of Fiona Coyne from relevancy, I actually enjoyed the message of this plot.  We’re seeing the challenges of her dealing with the aftermath of her family’s money troubles and how out of touch with the “real world“ she is.  We could make all the comments we want about her reverting back to being spoiled Fiona, but having to reduce your standard of living can be difficult regardless of status (in her case she’s still living better than most, but still).

More importantly, this situation exposes how dependent Fiona has been on other people throughout her life to do things for her.  The fact that she has zero knowledge on how to clean speaks to a deeper theme of people in general not having the skills to be self reliant before living on their own (as someone in their late 20’s, I can tell you for a fact I’ve seen people my age and older who STILL don’t know how to do cook, clean, do laundry and/or make basic home repairs).  With Drew being in high-school-dropout mode, he is a thread away from being completely isolated from the cast, essentially being relegated to the “Mr. Irrelevant” title given to Spinner Mason during the final years of his tenure.  However, Drew does well here, showing he can serve as someone who can keep Fiona grounded, as well as serve as support as this plot ends with the smooth hint that we will see Imogen’s home life in upcoming episodes.

How do YOU grade Rusty Cage?

You can now grade the plots in Rusty Cage by voting below!