Degrassi Episode Review: Take On Me

PLOT SUMMARY: As Ellie approaches the front steps of Degrassi, she stops to briefly snap the elastic band she’s wearing on her wrist.  It’s Saturday detention and Mr. Raditch explains the rules to the attendees (Ellie, Sean, Hazel, Jimmy and Toby) before going off to do his own thing.  Sean bounces a tennis ball against the wall which annoys the others, and he ends up tossing it in the air and making a ceiling tile fall onto Ellie‘s bag.  Sean, Jimmy and Toby manage to repair the ceiling, but are caught by Raditch, who forces everyone to scatter themselves across the caf.

Later, the group tells each other why their in detention: Sean for bad behavior, Jimmy and Toby for computer hacking and Ellie says she got detention for skipping class.  Hazel refuses to tell them what she got in trouble for, and walks out.  She heads to the bathroom and finds Raditch exercising in the gym with a swiss ball.  More time passes and as boredom starts setting in, the gang decides to play “truth or dare.”  Hazel picks “truth,” but when Ellie asks her why she’s in detention she switches to “dare.”  Jimmy dares Hazel to kiss Toby on the lips, which she does with ease.  Afterward, Sean presses Hazel anyway about why she’s in detention and she finally caves: she admits she was caught looking at porn on a school computer.  The gang finally loosens up and they start up a makeshift game of hockey in the caf before getting caught…by Simpson.  He pretends not to notice them acting up, but announces that his chemotherapy is finished and he’s returning to Degrassi.

Sean gets bored with playing and sits next to Ellie, who shares her lunch with him.  He asks her about the bands on her wrist and why she cuts; she tells him the bands are a therapy technique, and that she cuts because cutting is the only pain she can control.  She’s surprised when Sean tells her “That makes sense.”  Ellie then asks Sean about the rumors that he’s been stealing stuff at Degrassi and he admits to it, unaware that Ellie is secretly recording their conversation.  Raditch walks in and decides to separate everyone by sticking them in individual classrooms.  Ellie reviews the tape recording, but eventually gets bored and rallies everyone to explore the school.  They find an elevator which takes them to a ladder, which leads them to the roof of the school.  Toby’s terrified of heights yet the others don’t seem to care, with Jimmy/Hazel and Sean/Ellie going their separate ways.

Jimmy and Hazel find a necklace, and after Jimmy puts it on Hazel he kisses her.  Sean and Ellie find a spot to lie down and stare at the sky, and Sean tells Ellie he thinks she’s cute.  Neither one is scared of the other, and when Ellie shows Sean the scars from cutting on her forearm he examines them, slowly touching them and eventually holding hands with her.  Toby begins to slowly overcome his fear of heights when he notices Simpson and Raditch outside.  Simpson thinks Raditch has become too strict and should lighten up.  Raditch spots Toby on the roof, but is dumbfounded and thinks his eyes are playing tricks on him.  That leads him to rush inside to check on the kids, who hurry from the roof to get back to their classrooms.  Sean’s room is locked so Jimmy hurries to unlock it.  He’s able to in time, but as he’s running to his room he drops the custodial keys he took earlier and Raditch finds them in the hallway.

Raditch interrogates the gang, which refuses to tell Raditch who took the keys.  He threatens them with extra weeks of detention, but when Toby tells Raditch he was the person who took them Raditch allows everyone to go home.  As they’re leaving Ellie drops her bag, which causes her tape recorder to go off, playing a conversation Ellie and Sean had on the roof.  Everyone’s baffled as to why Ellie would be recording things, but Sean immediately figures it out:  she was doing a story about the thefts at Degrassi.  Sean takes the tape and smashes it, walking away disgusted.  When they return to school on Monday, Ellie apologizes to Sean and gives him the tape that has his actual confession.  She tells him she’s not doing the story and wants what happened between them on the roof to be the real truth.  As she walks away from Sean, who’s said nothing the entire time, he asks Ellie if it’s true that she’s not freaked out by him.  She tells him she’s not and Sean grabs her and holds it as the two smile at each other. 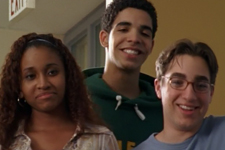 “Take On Me” is one of the few Degrassi episodes that, storywise, breaks the show’s storytelling formula.  Normally every episode in TNG has two plots, involving two separated groups of characters dealing with storylines that may or may not cross over at some point during the episode.  Here everything is happening in one space for the entire duration of the episode.  There aren’t multiple plots per se, but every character has a backstory that has lead them to being stuck in Saturday detention.  It’s fascinating watching unrelated storylines converge into this “Breakfast Club-esque” tale:  Sean is still serving the 2-month detention sentence he received in “This Charming Man.”  Toby and Jimmy are there because of their failed computer hacking scheme in “Accidents Will Happen, Part 1.”

It’s humorous yet odd that Hazel is stuck in detention after getting caught looking at porn.  It’s even more odd that she’s doing something that doesn’t involve being attached to Paige’s hip, a fact even the writers are so aware of that it becomes a running gag as Sean simultaneously questions and mocks Hazel’s presence in detention.  Even though she has a specific reason for being in detention, Ellie being there makes the least amount of sense.  One could assume she wanted a verbal confession from Sean about the theft at Degrassi, thus proving her journalistic skills for her Co-op gig. But when Sean said “I don’t do group activities,” and Jimmy responded by saying “Tell that to Jay next time you two decide to steal something,” it implies that Sean being involved with the thefts was common knowledge at Degrassi. So did Ellie really need to go to all this trouble going undercover in detention just to figure that out?

This episode doesn’t intrigue me simply because it’s an homage to an iconic 80’s flick; I find it interesting on both an emotional and inquisitive level. Despite spending 13 years of my life in grade school, I often wonder what it’d be like to just wander around a school when it’s closed, investigating locked doors and secret nooks that are normally hidden in plain sight by the everyday hustle and bustle of a school day.  The heart of this episode is simple: you have five kids who are bored, and what bored teenagers in detention wouldn’t take an elevator or climb a ladder and hang out on the roof if they could?  Once they reach the top, the episode’s emotional aspect begins to take over at full speed.

Jimmy and Hazel getting together is a prime example of Degrassi slapping a couple together out of nowhere.  The difference here is that it actually makes sense.  I’ve mentioned the term  “character of convenience” before.  Basically it’s when the show shifts a character’s personality (normally it’s a secondary character) into whatever they need in order to advance the plot at that time.  Owen Milligan in Seasons 10 and 11 is a perfect example of this.  I think of Jimmy and Hazel as a “couple of convenience.”  They’re two single characters who don’t receive as much attention as the other characters within their social groups (Paige, Spinner, Craig, Ashley, Marco), so it only makes sense to pair them together romantically in order to give them something to do…no harm, no foul.  However, things are different with Sean and Ellie.  Their moments together are genuine despite Ellie’s lingering need to get dirt for her story.  Irony lies in how quickly their relationship progresses, yet the moments where they initiate holding hands happen slowly and tenderly.  They’re drawn to each other not by what they know about each other, but by the way both effortlessly overlook each other’s perceived flaws, something everyone else in society has yet to do for either when it comes to romance.  Acceptance without judgment is a powerful thing.

“Take On Me’s” most underrated aspect is how it re-introduces and concludes several relationships:  Jimmy/Sean and Jimmy/Toby.  Jimmy is known to hold a grudge, and while it’s obvious he’d have one against Toby it’s refreshing to see there was still some lingering tension when it came to Sean.  Upon Jimmy helping Sean get into his room with Raditch approaching and Toby taking the blame for the keys we saw the barriers within these relationships weaken just a smidge.  There’s obviously no way these three were destined to be bff’s at the end of the day, but bravo to Degrassi for allowing these minor loose ends to be wrapped up to the point where the guys could be cordial toward each other as they move forward with their separate lives.

There are times when Degrassi fans go overboard with the “Degrassi doesn’t GO THERE enough” chatter.  “Take On Me” is as intense as the Swan Lake ride at Wonderland, but it manages to be incredibly fun and engaging.  The most dramatic part of this episode is the fact that it proves the “Degrassi needs to be dramatic to be good” mentality dead wrong.