Degrassi Episode Review: Another Brick In The Wall 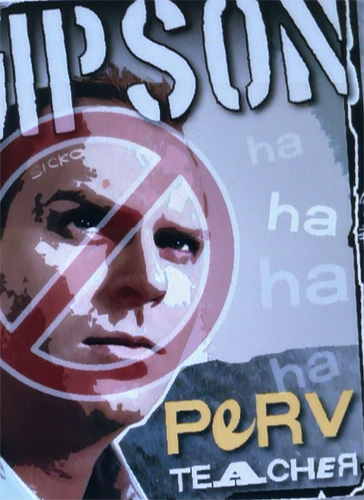 PLOT A SUMMARY: Snake learns that he’s been cleared of the pedophilia charges against him, which means he can return to Degrassi.  However, after being taunted by Lucas and Johnny he can’t make it through the front doors of the school.  Questioning whether or not he belongs at Degrassi, Snake opts to go back home instead.  Emma wants to show Snake that he’s wanted and belongs at Degrassi, so she teams up with Darcy to create a card with hundreds of signatures from students who support him.  Emma returns home with the card to find Snake and Spike arguing intensely.  Snake leaves, but eventually returns, promising Emma that he’ll return to Degrassi.  The next day he returns, but Lucas disrupts the class by showing Snake an “Anti-Simpson” website that implies Snake is a pedophile.  Snake also learns that one of his students withdrew from his class because of the accusations that were against him.

Snake spends the night drinking and obsessing over the pedophile webpage while Emma pleads for him to go back to work tomorrow.  He says he will, but the next day he’s nowhere to be found…Emma returns home to find Snake drunk and wallowing in self pity.  Spike arrives home and is disgusted by what she sees, and decides she should stay at her mom’s and wants to take Emma and Jack with her.  Snake realizes he can’t handle the situation on his own, so he decides to get counseling.  That doesn’t stop Spike from leaving because of their marriage woes, but Emma stays behind because she wants to support Snake.

Though this plot is technically supposed to be from Emma‘s perspective, the emotional weight within this episode all comes from Snake’s point of view.  The burden of his situation is too much to bear if you place yourself in his shoes. Keep in mind that in our society pedophiles are more hated than murderers.  I don’t have to state that both are terrible, but even the most heinous criminals have a hatred for child molesters.

Degrassi has shown us many times the perspective of those who have been sexually assaulted.  In Another Brick In The Wall we get a unique look at a victim in a sexual abuse case (Snake), with Degrassi showing us how incredibly damaging the label of “pedophile” can be.  It doesn’t matter what you did or didn’t do; the immediate reaction from society is that you’re guilty, without question.  The logic is sexual abuse of a minor is such a horrific event that happens more frequently than people will ever admit, because so many tend to be too afraid or ashamed to come foward…so why would anyone ever lie and say it happened when it really didn’t?  And the dilemma for the accused is how do you prove that it DIDN’T happen?  Snake knows there’s no definitive way to prove his innocence, even having done nothing.  And when he finds out he’s officially been vindicated, there’s still no relief because there will still be people who are convinced he molested Darcy.  He’s trapped in a coffin of hopelessness that’s being buried underneath a crushing weight of emotions, with no way to escape the double-edged sword of the child molester stigma and a marriage that’s falling apart again…even Spike isn’t sure what to think anymore.  It’s a lose-lose scenario for Simpson. 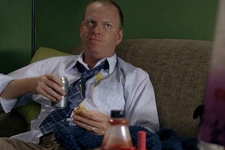 Snake’s not the only person suffering…it spreads like the plague to those involved. Darcy admitted that she lied.  So why did she say Snake molested her in the first place? Is she trying to protect her molester, or is she just a liar?  Those with their minds made up, like Lucas and Mia, will believe nothing that comes out of Darcy’s mouth.

It’s funny watching Spike yelling at Snake about giving up, then announcing she’s going to stay at her mom’s two seconds later.  Surprising enough, Emma’s the only person who shows any sort of emotional stability.  Spike was worried that Emma was going to “become controlling” to the point where she’d spiral out of control and have a relapse with her anorexia.  Ironically, Emma took the emotional lead because both Spike and Snake (whose marital troubles ran far deeper than they show us in this episode) were incapable of doing so.  This kind of scenario is terrifying, especially for any adult male these days…in an instant your reputation, no matter how good, could be destroyed beyond repair based on a horrific lie that you can’t prove is a lie.  It’s one of the cases where the old “Sticks and Stones” rhyme is dead wrong.

PLOT B SUMMARY:  Holly J is getting terrible grades in math, so she turns to Toby for help.  He agrees to tutor her, but under one condition: she must help him learn how to play the game Dance Dance Revolution.  Toby ends up tutoring her in a way that she can finally understand it, and in return she tutors him in DDR.  While showing him how to move, the two fall to the ground and share a conversation where Holly J shows her sensitive side.  The pair are caught by Anya and her crew…trying to maintain her reputation in front of her friends, Holly J acts as if Toby is gross and storms off.  Holly J gets a good grade on her next math test and admits to Anya that she has a crush on Toby.  Holly J tells Toby, but he has no interest in dating her…he’s not interested in being with someone who’s as concerned with their reputation as she is, and tells her she had a chance with him, but blew it.

With graduation on the horizon for Toby, it would’ve been easy for Degrassi to just mail it in with his character.  Toby meets the young girl who is overly worried about her reputation, he scolds her for doing so, she realizes the error of her ways and they live happily ever after until Toby grabs his diploma and heads for the Degrassi Bermuda Triangle.

Instead we get a Toby Isaacs who is the exact opposite Holly J.  She’s concerned with upholding her reputation because she cares what everyone else thinks of her; Toby’s only concerned with doing what he does and what Liberty thinks of him.  Holly J is insecure based on a couple of factors (needing to uphold her own social status while living up to her sister Heather’s legacy), while Toby is comfortable in his own skin and has no time pander to anyone else.  Toby’s demeanor in this episode shows how far he’s matured since the Season 2 episode “Mirror In The Bathroom,” when he craved social status as much as Holly J does now.  People tend to feel sorry for Toby (mainly for reasons like his lack of screen time compared to other main characters), but why should they when he seems to be content with who he is?