As a whole, I’m somewhat split on Nowhere To Run.  There were times where I was truly entertained, laughing at the episode’s ridiculousness…other times I was trying not to put my fist through the screen, also because of the episode’s ridiculousness.  The most annoying part was the show trying to convince me that this was some sort of scary, horror-themed episode.  For all of the flack TeenNick is receiving, they at least realize that this is not worthy of being called a Halloween special (now why they’re waiting three weeks to air it is a completely different story).

Nowhere To Run is a very weird hybrid of something like canon plots wrapped into a setting you’d expect to see in a Degrassi mini, with them adding just enough horror elements for them to cut promos that make it look somewhat Halloween related.  But because this is considered a REAL episode with REAL consequences, I feel like I’m forced to take it seriously at some level. I rolled my eyes every time “scary” music played, or when they focused on Marisol being afraid because of the Pratt murder legend. It was beyond stupid.  On the other hand, every single word that came out of Bianca’s mouth in this episode was pure gold.

PLOT A SUMMARY: After a summer away, Jake returns to more awkwardness with Clare as their parents are getting married.  Jake wants to reconcile with Clare, but she wants nothing to do with him after feeling heartbroken over the situation.  To get over things, Jake decides to invite Drew, Katie, Marisol and Alli to his cabin for a party.

Once there, Jake and Alli bond over their love troubles (Alli is heartbroken because Dave told her that he had a fling with a girl over the summer and slept with her).  They end up sharing a kiss and are caught by Clare, who crashed the cabin party with Bianca.  Clare runs off into the woods and gets lost, and Jake and Drew decide to look for her.  They find Clare’s headband covered in blood and fear the worst.  Completely lost, Clare is found by someone…it turns out it’s Eli.  Jake and Drew finally find them and realize Clare has hurt her hand.  When they return to the cabin, Jake tells Clare that Alli kissed him and that he wants a second chance.  Clare forgives Jake, but refuses to forgive Alli as the gang heads home. 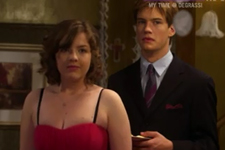 I’m not sure if I should cringe or applaud Degrassi for what they’ve accomplished with Clare Edwards, transforming a wholesome, good-hearted person into one of the most annoying characters on this show.  It takes a lot to destroy a strong character to the point where one would put them on the same level as Marisol Lewis, but Degrassi has managed to do it in just half of a season.

Cake is awful, and the fact that the show is still trying to shove this couple down our throats only makes it worse.  Some say that it’s natural for a character to change and that‘s very true, especially when they feel like everything they’ve been taught is a lie.  But with Clare, the beginning and end of this episode make it ever so clear that she’s so far gone, drowning in selfishness and self pity that she’s become virtually useless to anyone.  We’ve been hearing her complain about the same things over and over for the entire season, which up to this point had taken place over the course of several months.  Imagine if you were her friend and had to listen to Clare whining about this stuff every single day during that timeframe…I‘m sure you would want to punch yourself in the face as well.  This episode subjects us to the same Clare drama we’ve been observing since July, and provides nothing new.  It’s not surprising that Clare didn’t forgive Alli; Miss Edwards is suffering from tunnel vision at its most extreme, and for what? A couple that has never once given me a reason to like them.

Maybe if you’re easily swayed then you can buy Cake as a couple…instead of showing us, the writers have just *told* us that Cake was a serious couple in Now Or Never, and now they’re telling us that Cake loves each other despite there being no chemistry, no foundation for their relationship, and no depth to said relationship.

I feel awful for Jake, because as I’ve said before his character is being wasted as Clare’s current boy toy.  It was refreshing to see him on screen without Clare, but his role will always be limited as long as they’re dating, because he will always play second fiddle to the “Clare Edwards Super Melodrama Extravaganza.”

PLOT B SUMMARY: Katie feels very uncomfortable with the role Bianca has in Drew’s life…B has been spending a lot of time at the Torres house because part of her plea deal for her roll in the Vince drama is to work for Drew’s dad.  Drew and Katie go to Jake’s cabin, and Katie uses this trip as a chance to show Drew that she’s not uptight all the time.  They run off into the woods to make out, and also prank Marisol by scaring her.  However, Katie’s mood turns sour when Bianca arrives at the cabin unannounced.  Bianca takes great joy in egging on Marisol, who is paranoid that there might be a killer lurking in the woods near the cabin.

To calm down, Marisol decides to go to the shed to smoke weed she found in the cabin, and Katie goes with her.  The two wind up trapped and high (Katie high because of second-hand smoke), and try to dig their way out with hand tools.  Katie then decides to use a chainsaw to cut their way out of the shed.  Katie returns to the cabin and confronts Bianca, saying that B is trying to steal Drew from her.  Bianca tells Katie that she will eventually lose Drew because she’s too insecure and doesn’t trust Drew around other girls.  Katie decides not to let her jealousy get the best of her, and does so in the end by allowing Drew to walk with Bianca to her car that’s stranded in the woods.

This plot contained very little substance, but provided a lot of the episode’s entertainment value.  Marisol is still annoying.  Bianca, however, was simply amazing.  Just insert anything she said or did in this episode and it was great.

I actually liked how the episode focused not on a Drianca reunion (which is what I expected), but keyed in on Katie’s jealousy instead.  Even though saying this doesn’t mean much, to me there wasn’t a single hint of Drianca chemistry so that enhanced Katie’s paranoia a bit for me.  Though I couldn’t stand how heavily they leaned on the “scary” elements in this plot, I was left speechless by the scene where Katie just randomly used a chainsaw to get escape from the shed.  I think it’s one of the most ridiculous things to ever happen on this show, and I actually enjoyed it because it was so over-the-top ridiculous.  What wasn’t (and probably never will be) enjoyable is being forced to watch actors on this show pretend that they’re high. It’s so unbearable.  But at least we had Bianca moments to look forward to.

*So Dave goes from going on a break with Alli to losing his virginity over the summer to a random girl.  If you feel like it came out of nowhere, that’s because it did.  What an awfully complex plot device to create in order to put Alli in a position to kiss Jake.

*Degrassi, don’t think we didn’t catch that subtle reference you made to Katie’s knee at the end of the episode…please don’t let us down by making it less significant than it should be.

*Adam has been and continues to be a fantastic example of how characters should be used in secondary roles.  Adam could’ve easily been left out of any of those scenes at the Torres’ house, but having him there especially in the scene where he’s searching for the xbox controller, these are the little things that make individual scenes great.

*People are probably already tired of me saying this, but Bianca made this episode.  She brought a completely different energy than everyone else involved in Nowhere To Run.  I liked her before, but my love for her has now skyrocketed.  With a sharp tongue and some depth beyond her days of being the bad girl or so-and-so’s sidekick, she’s transforming into Alex Nunez 2.0 (a clone of Alex during her glory days of course).  I’m going to give Bianca an A+ by herself, because I’d rather have an entire episode of her making snaky remarks than have to bear watching any amount of Cake drama any day. For now B, you are my spiritual animal.