PLOT A: Declan’s is shocked when he find out Holly J’s feelings about the night of the party.

"I thought this'd be a happier moment." So did we, Declan.

After Declan and Holly J hook up, the after effects are completely different for each of them.  Declan is the happiest guy alive, and thinks he and Holly J are back together.  He even decides that he’s going to re-enroll at Degrassi.  Holly J?  Not so much.  She’s upset by it all, much to Fiona’s surprise.  The bigger shocker (to Fiona) is when Holly J says that she felt pressured into sleeping with Declan the night before.

Upon hearing this news, Declan is beyond horrified, believing that Holly J thinks he raped her, and after attempting to talk to a then-resistant Holly J, he decides to leave for good.

But wait, Holly J wonders why he’s going to leave without saying goodbye…she says felt pressured that night, but doesn’t think it was totally his fault, or that he raped her.   Boy do we have ourselves an interesting situation here; the only sure things are that Holly J got accepted to Yale, and she doesn’t have a romantic interest in Declan anymore, whose plan is to now just “go back to where he came from.”

Stefan Brogren did a fantastic job directing this episode with Degrassi’s two strongest actors.  This plot steps outside of the clichéd storyline about sexual assault, and delivers something intended to  make viewers equally as confused as Holly J was.

Part Two of this storyline completely sold me.  Take away watching any promos that told you what would happen in Part Two and I never would’ve guessed the storyline would go down like that.  I love, love, LOVE that this is the kind of plot that can create an intense debate.  For me, Holly J’s confusion about how she felt about that night only muddled any clear-cut thoughts about the situation within my head.  And there’s also the fact that we can’t forget to analyze Declan’s intent.  The difference between this show and real life is that during this plot we had an omniscient view of the story.  In real life we only have our view (if we’re involved), and if we’re spectators we only received a person’s perceived view.

My point is that even though without a doubt Declan should’ve been listening to Holly J, I can’t place him in the same category of Dean and the guy that raped Darcy (the kinds of guys I’d beat down if I saw them walking down the street).  Don’t take this as me  justifying his behavior in the situation, because I’m not.  If you’re a guy and you’re in that kind of situation with a girl, it is YOUR responsibility to be aware of what’s going on.  And if there’s even the slightest resistance or concern (on your part or the girl’s), you have to stop.  People still bitch about how glamourized Degrassi has become, but underneath that is an episode like this still serves as an amazing discussion piece, not only for fans, but families and classrooms as well.  There’s a handful of storylines that if anyone who has never watched Degrassi asked me what they should watch, I would suggest to them without question.  This storyline has been added to the list.

PLOT B: Clare keeps acting out, hoping it will stop her parents from doing the inevitable.

Still on a quest to “act out” so that her parents will have some sort of common thread (as opposed to them being on opposite sides and fighting constantly), Clare gets the wonderful idea to invite Eli over for dinner with her parents.  She uses Eli as a pawn in her game, pointing out things about him and his personal life that he knows her parents would object to (his dad’s job as a shock jock, and him being an atheist).  However, Eli’s not down with that…and it doesn’t work anyway seeing as how at the end Clare’s parents tell her they’re getting a divorce.

I really didn’t like this plot in Part 2 as much as I thought.  Eli was actually pretty great, but watching Clare act out was borderline ridiculous.  When she showed up at Degrassi in her punk (or goth, I don’t know what it is anymore) attire, that was too much.  It’s not the fact that she was intentionally acting out of character….the story just seemed to morph into a rushed cliché, with Aislinn looking like she was over acting a bit.

I know I gave this plot an A- in Part 1, but in Part 2 everything seemed to just go downhill.  As I said in the Part 2 review, this portion of Clare’s plot (which we know isn’t over) just became overly clichéd.  Though I get the point of Clare’s actions, it still doesn’t outweigh the fact that I’ve seen that many times before, and this version doesn’t bring anything new or interesting to the table.  The most interesting part of this storyline is the irony of Eli; he doesn’t want to conform to the dress code, but then we see him do so without complaint as Clare dresses like a hooker to make a statement (that part was extremely random).  And as strong as he believes in being who he is, he still wanted to make a great impression on Clare’s parents, which she tried to ruin with her plan.  Though I’m feeling “blah” about this plot and my final grade of it is a dramatically different that what I thought it would’ve been, I still have confidence that Clare’s breakdown can help this storyline bounce back in the future.

PLOT C: Chantay’s protest against the ban on extracurricular activities gets personal. 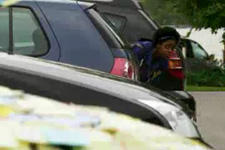 Oh snap, it's Chantay....HIDE YO WIFE!! HIDE YO KIDS!! She be climbing in yo windows, puttin sticky notes on your car....

So NOW things get going with this plot….in a plan to protest against the school’s ban on clubs, Chantay takes Anya’s idea to the max;  she completely covers Simpson’s car in sticky notes.  This leads to a discussion between Chantay and Mr. Simpson where they come up with the idea to create a forum for students to discuss questions and solutions on repairing the schools image (and getting the school’s clubs back), instead of continuing with the schools “We’re taking away everything” policy.

It’s unnecessary to recap this plot since it’s such a short one, so  I’m eliminating the “F” I gave it in Part 1.  They’ve done this several times in Season 10 whether the third plot isn’t distributed evenly through the episodes.  So from now on if there’s a third plot that we see all of thirty seconds in Part 1, I’ll just wait until Part 2 to review it.  As for this one, it’s actually not that bad.  The whole sticky note thing was a pretty creative protest.  Now obviously that sort of thing wouldn’t fly in real life (or if Ms. H were still around), but it’s believable in the sense that Mr. Simpson has had a closer connection with the main students than any of the other principals (or teachers) ever had.