SHAY PLOT SUMMARY: Tired of hiding her feelings for Tiny from Lola any longer, Shay asks Lola for permission to date him. Despite acknowledging that Shiny would make a great couple, Lola says no. When Shay tells Tiny that, the two get into a fight and Tiny decides not to go to the game to cheer on Shay. Degrassi’s volleyball team is in the finals against Northern Tech, whose captain, Kara, allows Frankie to place. However, at the same time Kara tells Shay that she’s tired of always being the bigger person, which prompts Shay to think about what she’s lost this year. Shay becomes overly aggressive during the game, trying to move her teammates out of the way so she can score all the points. Frankie calls a timeout, and Shay tells everyone she’s tired of giving up everything she wants for other people. Lola changes her mind about Shay dating Tiny and tells Shay to message him, and Degrassi wins the championship. 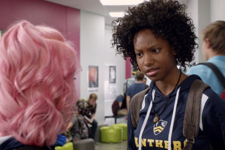 It’s really interesting that Shay’s plot is a culmination of everything that’s happened to her in Next Class so far. She put her feelings aside so that Lola could date Tiny. She gave up her shot at getting into a prestigious volleyball camp partly thanks to Lola urging her to stand up for what’s right. She kicked Frankie off the team at the persistence of Northern Tech, damaging their season to the point national team scouts didn’t bother showing up to Degrassi’s games (to be fair they would’ve been even more screwed if Frankie had remained on the team, because other teams were boycotting them at that point).

I’d like to think that a lot of us have felt like we’ve had to sacrifice things for the sake of others, while at the same time it feels like everyone else in the world gets to do whatever they want. I’m liking how they tied Shay’s feelings (not wanting to give up Tiny and sports camp, but doing so anyway) into Kara begrudgingly accepting Frankie’s apology, showing that people will swallow their feelings for the sake of civility, even in serious situations. 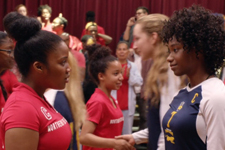 If you read comments nowadays like “Degrassi’s doesn’t tackle real teen issues anymore,” all that tells you is the person probably isn’t paying that much attention to the actual show. Throughout DNC Seasons 1 and 2 we saw the chaos created by multiple events; we saw not only how the events affected their respective characters, but then we witnessed how all of them one collectively affected shay. The consequences didn’t “Go There” in the way we’ve talked up Degrassi as a super intense teen drama over the years, but they culminated into Shay feeling as if she’d lost a lot this year, from friends to opportunities regarding her future.

And isn’t that the most relatable teen thing there is? Watching life pile onto your young life to the point it feels like everything’s falling apart?

ZOE PLOT SUMMARY: Preparing the bus to leave for Degrassi’s volleyball game, Zoë is approached by Grace. Zoë doesn’t understand why Grace is even talking to her, and Grace says it’s because she saved her life. Grace also tells Zoë that life is too short to keep pushing people away. While gathering more stuff in the locker room Winston tries to put the moves on Zoë, but she pushes him away and calls him a perv. Later, she’s alone and finds herself connecting with other people online who self harm. Grace approaches Zoë again, this time to check on her. When Grace sees that Zoë’s uploaded a self harm picture to Hastygram, she tells Zoë that things would be easier if she’d come out instead of always pushing people away. Zoë apologizes to Winston and tells him to meet her in the locker room for a “special surprise.” There the two start making out, but Zoë becomes visibly upset. She keeps going and tries to take Winston’s pants off, but he pushes her off of him. When he asks her what’s wrong, she finally tells him that she’s gay. 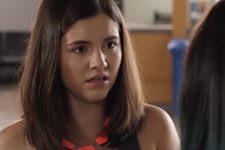 I don’t have much to say about this one except the fact it’s wonderfully genuine in its emotions. You can feel Zoë being physically repulsed by Winston’s advances the first time they were in the locker room together. I got chills watching her try to force herself to have sex with Winston despite not wanting to, and finally accepting that he’s gay. Winston is amazing; instead of focusing on how the situation affects him, he gives Zoë the emotional support she needs.

If you ask casual viewers what Degrassi’s been tackling during these first two seasons of Next Class, they’ll probably give you the surface answers: feminism, gaming culture, racism, ship stuff, etc.

However, if you dig deeper into these stories you’ll find that self-sabotage is a huge recurring theme in this new Degrassi series. We’ve watched so many characters sabotaging their own lives in DNC Seasons 1 and 2 because of fear and insecurities, some with damaging results (Miles and Zoë), all because they’d rather suffer pain than risk putting themselves out there to obtain happiness.

Forgiveness and understanding have also been prevalent, especially in Season 2. Grace shows compassion toward Zoë in this episode because she too is trying to break down the walls she’s built around herself. We’ve also seen characters develop a stronger sense of awareness after hitting rock bottom, learning to become honest with themselves and what they’ve done. Hopefully, being honest with herself is the first step toward Zoë finally finding the happiness and sense of belonging she’s desperately wanted since coming to Degrassi.

*Shoutout to the banner in this episode that has “Whatever it takes” on it. That phrase is synonymous with Degrassi for most fans thanks to the show’s theme song, but rarely is it seen or heard in the actual episodes.

HUNTER PLOT SUMMARY: The episode starts off with us learning that Hunter will have to go to court for the swatting he coordinated against Maya earlier this year. However, things reach a happier note as Hunter has planned a date with Yael at his house…until Baaz and Vijay crash it. Baaz is concerned about how their friend group would be affected if Hunter and Yael ever broke up, and the conversation turns to concerns that Hunter will snap again. When Baaz brings up the fact Hunter was in a psych ward and could end up in juvenile detention for the swatting, Hunter angrily tells everyone to leave. Later, Hunter questions why anyone would date him when his life is a mess, and Miles tells him he felt the same say until he realized he deserved happiness. Miles drives Hunter to the game to find Yael, and Hunter tells her that if he ever scares her she should run and never look back. Yael then kisses him. 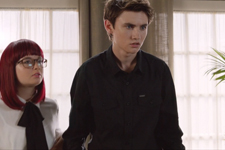 “This could ruin the delicate dynamics of our friend group,” Baaz says, referring to the recent revelation that Hunter and Yael are trying to date. This group of friends sitting down to have an actual conversation about this is hilarious because I often think of how the dynamics of social groups are affected by romantic relationships (I literally just mentioned this in my review of the previous episode, #TheseAreMyConfessions).

However, this plot goes from funny to very serious, very quickly once they start talking about how Hunter would probably be the reason for a potential breakup:

BAAZ: “What if he does something crazy?”
HUNTER: “I would never.”
BAAZ: “Dude, you just got out of a psychiatric hospital. You were diagnosed with depression and ODD.”
YAEL: “That’s not fair, okay? He’s better.”
BAAZ: “For now…but he’s basically just a ticking time bomb…plus he could still go to juvie for the swatting.”

My heart absolutely hurts for Hunter in this powerful scene. We know he feels awful for everything he’s done, and he’s already scared that he’ll lose control again. Mental illness stigmas are bad enough as it is, so I can’t imagine anyone suffering from it being told to their face they’re essentially “crazy,” and that they’re a meltdown waiting to happen.

You see, this is why I love The Principal’s Office episodes where they actually discuss the episodes in depth…in their episode for 209 Stefan and Matty H talked about Baaz being a “pure capitalist.” He’s strictly goal oriented, strategically planning moves with no thought into how his actions may affect other people. This kind of insight from Degrassi’s writers puts all of Baaz’s a-hole behavior this season in perspective, from following terrible advice from a relationship book to spouting off at Hunter in this episode with no regard for Hunter’s feelings.

I love how in this season the show’s not only been using characters to give advice to their peers, but the characters are also specifically passing on the experience they’ve gained from similar situations. In #OMFG alone Grace tells Zoë that it’s not worth it to keep pushing people away, and here we see Miles telling Hunter that he too felt undeserving of happiness at one point, so much that the hurt himself and everyone around him. “You didn’t choose to be built the way you are, so you can only be the best Hunter you can be.” It’s cheesy, but true.

Not only does Hunter have his daily struggles, but he also has to work on gaining his parents’ trust as well as go to court for the swatting in a month. This might be a finale episode where he finally gets the girl, but Degrassi goes to great lengths to remind us his story is far from over.

*People who watched Degrassi Season 14 know about the Degrassi Nudes storyline. Zoë faced the possibility of criminal charges, but that storyline was ultimately dropped. I wanna believe what they’re doing with Hunter is what they wanted to/could’ve done with Zoë.

THE BUS CRASH SUMMARY: After Degrassi wins the championship game against Northern Tech, the players learn that the bus transporting Degrassi fans to the game has crashed. Live video of the crash site shows the bus flipped over on the side of the highway. The news reporter says no fatalities have been reported, but multiple students have been rushed to the hospital, with at least one in critical condition. The characters on bus when it crashed were Grace, Tristan, Zig, Maya, Jonah and Tiny.

I’ve been pretty critical of Degrassi finales over the years, dating all the way back to The Next Generation days. It’s strange how the show would go on these runs of really strong episodes only to end seasons (3-6, 10, 11) on an underwhelming note. Degrassi has most definitely improved their finales since, but this is the first Degrassi finale to truly leave me speechless through the use of an insane cliffhanger.

This is fantastic because not only does it set up a major plot for the next season (it seems unlikely all of the characters escaped that crash with just minor injuries), but there’s also a wide range of possible outcomes. Meanwhile, the reactions of characters in the gym combined with excellent music placement creates a scene full of shock, tension and forced hope for the best, as the worst is more than possible.

*Sometimes it’s better to be lucky…I love how the fact they have Yael mention she, Baaz and Vijay missed the bus gives me chills.

*As of posting this review (9/20/16), Degrassi has already filmed seasons 3 and 4 of Next Class. If you’re interested in deducing what may or may not have happened to the characters on the bus, you can browse all of the “On Set” updates I posted over the summer on this page.