LOLA PLOT SUMMARY: Upset because no one will listen to her pleas that Tiny was unfairly suspended, Lola decides to start a protest. She gets people on board except for Tiny, who doesn’t want his suspension to blow up into a media circus. When Lola gives up, Grace tells her that racism at Degrassi is a bigger issue than just Tiny, and that he’s treated differently than someone like Frankie. Lola also learns from alums Marco Del Rossi and Paige Michalchuk that zero-tolerance policies can be flawed and have a heavier impact on minorities, so Lola decides to rejoin the protest and convinces Tiny to join as well. When the police show up they tell the protestors to move to the grass and quiet down. Things get intense as Lola and Shay refuse to move, but they eventually comply with the cop’s orders. They find a way to get their message to the alumni event by using spotlights to shine messages into the gym. Eventually, Lola is allowed to finally address the group about her concerns regarding Tiny’s suspension. Afterward, Simpson still believes Tiny’s suspension was justified, but Lola’s put in charge of a student committee to review the school’s zero-tolerance policy. 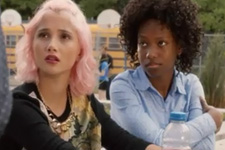 This is one of those storylines where there’s a lot of noise; not only is there the Degrassi alumni event, but the show wrote in a protest that will surely trigger feelings about the current racial climate here in the United States. It’d be easy to get bogged down by the fact there’s a protest, look at it from the usual dismissive attitude people have about those things and then go about our way.  But looking at a protest led by Lola in the confines of Degrassi reminds me to think about the most important question to ask when watching this show: why are the characters doing what they do?

In Lola’s case, she starts a protest because no one would listen to her when she questioned the fairness of Tiny’s suspension. This isn’t Lola going about the Emma-Nelson-from-early-TNG way of beating people over the head with her opinion; Principal Simpson can’t even be bothered to explain why his hands are tied because of a policy out of his control. Lola’s a character who’s never really been taken seriously, neither by other characters nor viewers. She often comes across as aloof and immature, but her ability to stand up and use her own unique voice for a greater cause demonstrates that she can be more than just a bubbly girl with pink hair.

Through Marco’s commentary Degrassi blatantly addresses the fact that minorities are far more likely to be suspended because of zero-tolerance policies. Adding to the protest, the characters make it known they feel Tiny’s punishment is unfair compared to the lack of similar repercussions for Frankie’s racist drawing, and if we’re looking at Degrassi’s code of conduct… 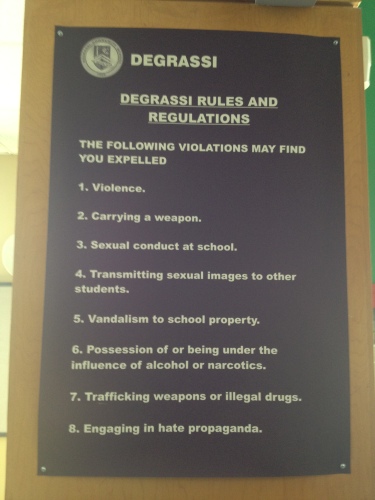 A prop from the set of Degrassi which outlines the school’s conduct guidelines.

While minorities might be more impacted by the sheer absurdity of zero-tolerance policies in schools, Degrassi also makes it a point to show that in Tiny’s specific situation his race wasn’t necessarily a factor in his suspension. “I don’t know…I mean I’ve wondered, but you never really know,” he says when Lola asks him if he thinks Simpson suspended him because he’s black. 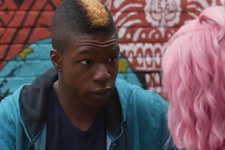 One of my favorite scenes in Next Class is when Degrassi shows Tiny not wanting Lola to protest on his behalf. He just wants to put his head down and get from point A to B with as little noise as possible. He’s a good kid and he’s smart enough to know that a potential media-driven narrative would paint him and the situation to be far worse than it is (i.e. His family members are drug addicts and criminals, so clearly that means he’s a thug). Having your name and face put out there in this day and age is scary when the typical reaction is usually bash first, ask questions never.

But while we tend to view the world based on our own experiences (because our experiences are all that we know), it’s easy to forget that sometimes it’s more to the world than just your own individual experience. With Lola and Tiny, we see two people navigating through a situation where Tiny’s suspension plays a small part of a much larger issue.

TRISTAN PLOT SUMMARY: Tristan’s plan to make the 60th Anniversary Gala great come to a halt when Lola reveals she’s protesting Tiny’s suspension. While Tristan is concerned Lola’s behavior will reflect poorly on the school, Degrassi alum Liberty Van Zandt says Lola has a right to protest and joins her cause. On top of not wanting the protest to ruin the alumni event, Tristan tries to censor Mo Mashkour’s comedy routine, which mentions Lola’s protest. The two clash and Mo quits, as we also learn Tristan bumped Manny Santos and Terri MacGregor’s performances because he said they were “too negative.” When Lola’s protest shines messages into the gala and Frankie’s laughed off the stage, Tristan yells at the crowd for making people feel unwelcome on the stage. Mo calls Tristan out for having done the same thing to him, so Tristan ends up realizing he was wrong and allows Lola to speak her message directly to the crowd. 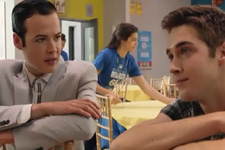 “Lola’s protest…it makes our school look like we have problems,” Tristan says. If only he knew the history of all that’s happened in these hallways since before he was even born.

This “Next Class” in Degrassi’s existence has evolved not just in addressing this generation’s heavy use of technology, but also in addressing the major social issues affecting today’s society. And when it comes to defending one’s position these days, the trend is now to be so offended by things, no matter how insignificant, that we instantly demand they get shut down. 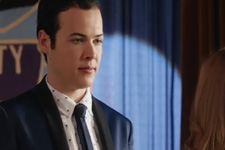 While Tristan’s role as school president has given him something to do besides being Zoë’s bff and being connected to Miles in various ways, his presidential platform has always been to “make Degrassi a place for everyone.” I get that he’s worked hard on making a the 60th Anniversary Gala an event to remember, but at what point do you abandon what you stand for in order to accomplish things? Trying to shut down every opposing viewpoint simply because you don’t like it isn’t really good enough of an excuse, and in the case of someone in power in a political structure it’s unacceptable.

Tristan wanted to shut down the protest, Mo’s comedy routine and Manny’s song because they didn’t fit the idealistic view of Degrassi he wanted to present to the alumi. The irony is that these Degrassi almuni could tell Tristan from firsthand experience that their school is far from perfect.

FRANKIE PLOT SUMMARY: As Frankie has hope for moving past the gorilla banner incident, she’s presented with an opportunity to show people that she’s more than just her mistake. When Maya loses her voice, Frankie’s asked to fill in and perform the school song at the 60th Anniversary Gala with Peter and Sav. However, when she tells them about what she’s done they back out because they don’t want to look like they support her behavior. After seeing her face on signs of people protesting racism at the school, Frankie’s encouraged by Paige and Spinner’s advice that making mistakes is okay as long as you learn from them, and that Degrassi does give second chances to good people eventually. During Frankie’s song, the protest outside uses spotlights to project messages like “Racism lives here” into the gym during the gala. Embarrassed, Frankie runs off stage as people laugh, and she vows to never return to Degrassi. 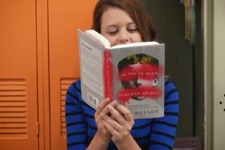 This episode is setting up the climax for Frankie’s storyline in a future episode, but I love how this plot uses the alumni to present some really important ideas. We get a sense of how far Frankie’s actions have reached when Sav and Peter, complete strangers to her, decide not to perform with her. How people behave has an impact on how those around them are also perceived (hence things like “Birds of a feather flock together,” and “You are the company you keep“). Talking about race typically makes people uncomfortable to begin with, so racism is a controversy people definitely want to avoid being linked to under any circumstance. 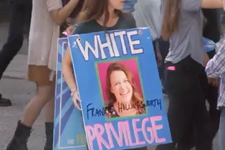 Paige and Spinner’s cameos in Frankie’s plot are amazing. They don’t judge her like her peers have, instead choosing to impart the wisdom they’ve gained through the mistakes they made at Frankie’s age (the most notable being Spinner getting ostracized by the entire school in TNG Season 4 and throughout Season 5).

“If you’re gonna make mistakes this is the place to do it as long as you learn from them,” Paige says. But by the end of this episode Frankie shows that she still has a lot of learning to do since she’s still doing the one thing she’s been guilty of all along: actively avoiding responsibility and running away from her problems.

*The obvious: having former Degrassi characters return is amazing.

*Shay confronting the cop is easily one of the most intense moments I’ve watched on Degrassi in a long time. I don’t even know how Degrassi would go about handling a story if things at the protest had gotten out of control.

*I’ve hated Spemma as the next Degrassian, but I’m glad they’re still married. Having Spinner and Emma get married was a widely hated move…even Executive Producer Stephen Stohn has said it was a mistake. However, Degrassi fans have forever loved to complain about the show’s “fanservice,” and I’m telling you breaking up Spemma would’ve been a fanservice move ten times bigger than the cameos in this episode or any couple the show has put together over the past decade and a half.

*”Degrassi’s pretty cool, but even great places can be better, right?” I’m not sure if this was intentional, but that line in the midst of a story about racism fits awfully nice into the idea that Degrassi’s aware of how it’s been perceived when it comes to how it handles race and incorporates people of color into the show. When we get into Next Class Season 3, more than half of the cast will be POC.

*”That lady actually listened to me!” Lola saying that about Emma makes me feel so old.

*I like how Holly J clearly disagrees with how Tristan is censoring things throughout this episode, but she doesn’t get involved despite having been a former student council president herself.

*The only disappointing thing about the alumni event was that I kept scanning the crowd for Degrassi Junior High characters, and none were to be found. It was funny that Stephen Stohn was actually written into the episode as an alumnus, though.

*At one point Paige says, “If you’re a good person, Degrassi always seems to give you a second chance.” That along with her comment about this being a place to mistakes as long as you learn from them applies not just to the show, but to real life as well.