This 2-hour special is different even from the other movies we’ve seen (Degrassi Takes Manhattan, Degrassi Goes Hollywood) because even though it’s canon, at the same time we’re not really supposed to be taking it seriously.  That’s because they’ve set it up as a mystery-style episode where Gloria Chin, known as the cheerleader who briefly flirted with Zig in 14A, is kidnapped.  Tristan “narrates” this episode as he’s vlogging, because it’s established that he wasn’t to become a internet famous like Gloria.

Don’t Look Back is more entertainment driven, so I don’t necessarily have a “grade” for this episode.  It’s really nice to sit back and enjoy an episode without expecting anything or putting much thought into it.  Overall, it was alright; there were parts that were entertaining, parts that weren’t, and parts that were weird, especially down the stretch. I’ll lay out the storylines, then throw out some thoughts about what happened.

Frankie is late on the first day for her internship at City Hall because some creeper was following her around asking if she wanted a ride.  Her fellow interns already don’t like her because she’s the rich Mayor’s daughter.  Frankie tries to fit in with them by inviting herself to Cat’s birthday party at a club and getting wasted, but Mr. Hollingsworth finds out and punishes all of the interns.  She tells one of the interns, Logan, that she doesn’t know what she’s doing and needs someone to teach her, so he does.  The two become friends and they learn Logan’s girlfriend, Gloria, is missing.  Frankie goes to the police to offer information about the weird guy who followed her around, but the police aren’t really interested.  Logan’s upset over Gloria, so Frankie drags him to hang out with her and Winston.

Winston thinks it’s weird Frankie brought Logan along on their date, but she tells Winston she feels really bad for Logan.  People start noticing Frankie and Logan are getting close, but Frankie says they’re just friends.  While searching for possible suspects, Logan receives a video from Gloria being held captive.  Gloria says her kidnappers won’t let her go unless they receive $10,000.  Frankie borrows the money from Hunter and gives it to Logan.  When she doesn’t hear back from him, she starts to worry.  Winston believes Frankie got scammed and is saddened to hear Frankie admit that she’s developed feelings for Logan.  Frankie calls Logan and he asks for more money; when Frankie says no, he berates her.  As the Tenners come together to find a missing Maya, Frankie joins them and says Logan is the kidnapper.  After Gloria and Maya are found, Frankie tries to apologize to Winston and hopes he’ll give them a second chance.  Winston can’t get over the fact Frankie was so emotionally involved in another guy, and they break up

After failing her lifeguarding class, Maya tries to get a summer job nannying for music producer Jordyn Kincaid.  However, Gloria has swooped in to take the job.  Maya becomes so jealous of Gloria that she asks Lola to help her put a curse on her.  Maya gets the job after Gloria goes missing, and Jordyn’s kids prank her by saying their house in haunted and using a Ouija board to contact the ghost haunting them.  After a while, the kids start warming up to Maya and she takes them along on her date with Zig to participate in a zombie walk, where they tell Maya the feel like their mom is never there for them.  Also, Zig’s upset and leaves the date because they haven’t spent any alone time together all summer.  When Maya tells Jordyn she needs to be a better parent, Jordyn fires her.  While randomly sitting at Lola’s Cantina, Maya spots Gloria and follows her into an alley where she’s also kidnapped.  Maya finds herself trapped in a cage with Gloria and learns she and her boyfriend had planned the kidnapping to receive enough ransom money so they can run off together.  Maya’s plan to escape fails, but the cops show up thanks to the other Tenners. 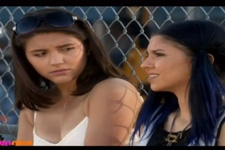 It’s summer school at Degrassi and Grace reluctantly becomes lab partners with Zoë.  When Zoë continues to not understand their assignment, Grace uses trans-cranial direct current stimulation on Zoë to help her study.  Zoë gets an A, and Grace encourages her to take an interest in science.  Tristan starts to think Zoë’s teacher, Mr. Bain, is interested in her, and warns Zoë about the girls around town going missing.  Zoë decides to test Tristan’s theory by flirting with Mr. Bain while the two are alone, but he kicks her out of the after-hours science group.  Zoë and Grace go to Bain’s office to explain Zoë flirting was a misunderstanding, but they find information about Gloria on his desk.  They find even more photos of missing girls in Bain’s truck, and call the police on him; it turns out he has nothing to do with Gloria’s disappearance.

Later, Miles shows up at Lola’s Cantina to find Zoë because they haven’t hung out all summer.  Because Zoë’s been hanging out with Grace, Miles is convinced Grace is in love with her.  At school Zoë confronts Grace, who denies it.  In order to test Grace, Zoë chooses to hang out with Miles over Grace.  The constant PDA annoys Grace, and the two get in a fight while Grace is the third wheel on Ziles’ date.  The Tenners find out Maya’s missing and use science and social media to find her.  Zoë finally acknowledges she has feelings for Grace and kisses her, but tells her she wants to take things slowly.

Some thoughts on Don’t Look Back…

Degrassi crammed an entire summer into this 2-hour special, and I can tell you without a doubt this summer setting would’ve been far more interesting as an expanded block than when they shipped the kids off to Paris in 13A.  Sometimes the show tries too hard to be creative, so for every enjoyable musical or dance there’s a Paris or Spemma marriage.

Frankie’s plot was really sad.  The ending of Frankston (again) isn’t surprising, but Frankie put a lot of trust into this Logan guy and he took advantage of her.  It sucks to be used.  When it comes to Frankston, I had a feeling Winston would say what he said about emotional cheating being worse than physical cheating.  Cheating sucks regardless and is never justified, however, I would feel even more hurt if it were emotional cheating as opposed to just the physical kind.  Frankie is firmly planted as a major character on the show moving forward, but Winston isn’t, and without him being attached to Frankie I’m curious to see how he’ll be used in the future.

Maya getting a babysitting job with a music producer is pure convenience, and it’s funny to see this after my commentary on Jenna’s departure, another female musician whose interest in the hobby became virtually nonexistent on the show after a while.  Amidst the fun silliness of the mystery plot, there’s two serious topics to look at: Maya’s jealousy toward Gloria and how Jordyn’s kids felt about her.

Ideas often shown throughout season 14 were the concepts of jealousy and judging people and their lives based on superficial traits.  Frankie was pegged as the rich girl whose daddy (and his money) could solve all her problems.  Lola is viewed as dumb, but she’s a whiz in the classroom. Drew referred to Jonah as “Guyliner,” used in a condescending manner toward the guy Mr. Torres was jealous of.  Though it turns out Gloria and her boyfriend Logan were both tools, Maya was jealous of Gloria because she was pretty, popular and beloved.

Another sad aspect of this episode involved Jordyn Kincaid’s children, who felt like their mother was never there for them.  We’ve seen how the lack of love and attention from a parent can affect a teen (the Hollingsworths), and it’s even more disheartening to see it when the kids are even younger.  Maya tried to do the right thing by telling Jordyn she needed to spend more time with her children, but once again Maya has a way of trying to help and going about it the wrong way.

In one of the most underrated concepts ever, I LOVE that Degrassi had some of the characters involved in summer school.  Zoë sounds a lot like some teenagers you’ll meet, the kind who will get bad grades simply because they aren’t interested in putting in more effort than the bare minimum to learn the material. 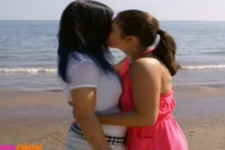 However, when we get to Gracevas, I still don’t know what the hell is happening.  Degrassi leans heavily on ships, and I get it.   Ships make this fandom go round, despite fans saying they’re “tired of the show’s relationship drama.” I’ve been in the fandom for over a decade and it never fails that this fandom gets so worked up over ships; all Degrassi has to do is plant the seeds, water them here and there, and fangirls/fanboys will do the rest.  Whether you love or hate a ship, if you obsessively do either in today’s digital realm, Degrassi wins (i.e. the reason Eclare is the most powerful couple in the history of the show is because of both the extreme love and hatred they received for 5 seasons.  ).

There have been instances where characters in the same social groups have dated each other. What I don’t get here is the insane speed at which “Tenner Roulette” is happening, especially in 14B.  It’s like watching the writers sitting in their writing room, eating snacks and debating which storylines and ships to create, except that process is playing out in the episodes.

At the end of 14A we saw Zoë and Zig on the path to finally establishing something romantically, after Zoë had rejected Zig earlier in the season.  Next thing you know, it’s 14B and Zaya is a thing.  Miles and Tristan broke up, because it was thought that Miles was interested in Maya again.  That was also nullified once Zaya got together.  Then Zoë looked headed for a reconciliation with Miles until she realized she’s basically in love with Grace now.  The end of this movie implies Tristan wants Miles again.  And that doesn’t even cover the fact Maya, Zoë and Tristan all tried to get a ride on the Miles train back in 13A.  At this point, they’re better off just having the characters participate in a giant orgy in the dark, and whichever characters are together when Tiny turns the lights on (because they’re not gonna let a brotha get in on this sexy action), they’re the permanent pairings.  Just make up your mind, because there’s too much talent in this “Next Class” of characters for them to all drown in this shallow love pool.