Boycott The Caf: The Next Generation 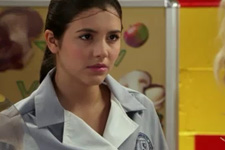 Zoë’s preliminary hearing is happening soon, so her lawyer is advising Zoë on what she needs to do to show remorse so the judge will show leniency in her case.  The lawyer advises Zoë do 100 hours of community service at Degrassi by working in the caf mornings and at lunchtime.  Everyone blames Zoë for the new rules at school, so she tries to make it up to them by secretly offering cell phones during lunch.  Ms. Pill catches onto Zoë’s scheme, but gives Zoë a second chance not expelling her:  she just has to clean the entire caf instead.

While doing so, Zoë receives a little support from an unexpected source: Miles, who’s also serving punishment in the caf for having set the school on fire.

QUICK GRADE: C-
QUICK REVIEW: Zoë Rivas can funny and awesome at times, but for the most part she has a history of really terrible behavior toward other people, making it hard to feel bad for her in this situation.  The thing is she’ll do something, suffer negative consequences, straighten up for a while then turn right back around and do something else, as if she learned nothing from her previous actions.  All of this stems from her overwhelming desire to be liked. We saw it in her jealously toward Maya in season 13, as well as how she was willing to do anything (even destroy Frankie’s life) in order to continue clinging to the friendships she’d made with the other cheerleaders in 14A; friendships she’s desperately longed for since coming to Degrassi.

At this point I’ve officially hit the brick wall with Zoë’s repetitive behavior, especially in a situation where her butt is facing jail time.  She’s a smart girl who wastes her intelligence making stupid choices.  Asking for a “tuna sandwich” will forever live in fandom lingo, but the scheme itself (Zoë corralling a bunch of prepaid cell phones to distribute to students) is silly.  Despite us not knowing what the hell is happening with this constantly-changing carousel of interpersonal relationships that is “Zollingzaya,” Miles delivers the best advice of the episode: “I just know that I’ll never please the haters, so I can either let that tear me up, or I can get over it.“

Frankie has a lot going on with juggling the play and home life, and she freaks out after she receives a “C” on a math test.  Frankie wants to skip rehearsal so she can study for the next test, but Winston convinces her not to.  With limited study time, Frankie feels unprepared for the test and cheats off of Lola.  Because Frankie copied all of Lola’s answers they end up with the same grade.

Both Lola and Frankie deny cheating, and Coach Armstrong says they’ll both receive a “0” if neither of them admits to it.  Frankie comes clean and Armstrong gives her a “0,” but tells her he won’t call her parents.  She apologizes to Lola for cheating, then Lola blurts out that she and Winston kissed.  After Winston walks up, an upset Frankie tells him he’s only allowed to talk to her at rehearsals.

QUICK GRADE: B+
QUICK REVIEW: Some may consider this a “boring plot,” but isn’t that what we wanted? More relatable plots that aren’t 100% centered around relationship drama?  The show is slipping in more of these simple plots, so get used to it.  It’s not over-the-top, and it *gasp* actually deals with a character and their schoolwork!  The parallel here is Frankie cheating, unaware that Winston has cheated on her until the end of the episode.  “Cheating’s not the end of the world,” Winston says to Frankie in regards to learning she cheated on a test.

Winston has transformed from Degrassi’s resident cheeseball to kind of a jerk in the blink of an eye.  It’s weird watching Lola say she didn’t remember who kissed who to Frankie, especially when Winston used similar wording when he told Imogen about the kiss in Ready or Not.  If Lola says it, I believe her; if Winston says it, I believe he’s trying to convince himself the details are hazier than they really were.   Still, Winston tried to guilt Lola into never telling Frankie despite that being an impossible task for Ms. Pacini.

Can I also say that I love how the show casually threw in the fact Lola, who is and even refers to herself as “the dumb one,” is a freakin’ math whiz?

Jackogen Comes To A Head

Imogen is still mad that Jack kept secret the fact she hasn’t come out to her parents yet.  At first Imogen is fine going along with Jack’s request that her parents never find out, but it becomes difficult once Imogen realizes how much stuff they’ll miss out on.  They were nominated for “Best Couple” for the yearbook, but Jack doesn’t want them to take a picture for it.

That also means they can only go to prom together as friends.  After seeing how cute Bhandallas is as a couple, Imogen decides to press Jack to come out to her parents.  Imogen even offers to help her, but Jack refuses and breaks up with Imogen.

QUICK GRADE: B
QUICK REVIEW: The best possible outcome happened in this episode with Jackogen breaking up.  Jack is cool as a person, but I’ve always viewed her as pretty sketchy when it comes to romantic relationships.  Compromise is necessary in relationships, but at the same time there are things you won’t be willing to compromise on (as will your partner).  The options are to either accept it, or not.  Jack was unwilling to budge on her stance of not coming out to her parents.  We’ve seen Imogen compromise who she is for other people so many times, and I’m glad that for once she stood firm and didn’t compromise on what she felt she needed out of their relationship.