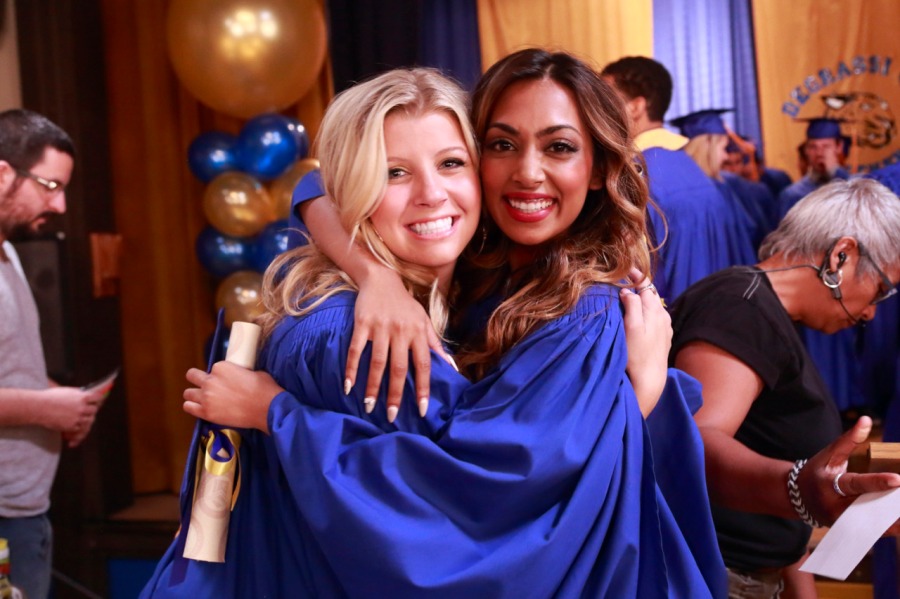 MTV released a lengthy July press release which revealed the episode descriptions for all 12 episodes of 14B (NOTE: no information about the 4-part movie, scheduled to air at some point after 14B, has been released).

1413: Watch Out Now
Becky devises a plan to get Drew to change his mind after he rejects her idea of a student-run variety show. Zoë faces potential criminal charges for her involvement with a fundraising scandal, and Winston performs standup comedy in front of the school.

1414: Ready Or Not
Winston’s musical is set to be performed at Degrassi, but he finds himself reluctant to bring Lola on as the leading lady given their recent history. Zig uses the musical as a distraction from his guilty conscience, and Clare and Eli find it difficult to be just friends.

1415: Wishlist
Frankie warms up to the idea of having a relationship with her financially inclined father while she plans to celebrate her birthday with a Gatsby inspired party. Maya looks for a gal pal to take with her to the spa for a much needed day of relaxation. Jack fails to stand up for Imogen as things get violent with Damon, causing the principal to get involved.

1416: Walking In My Shoes
Zoë works lunch duty at the school where she has to serve peers who are angry with her over the fundraising scandal. Frankie gets caught cheating in school, and she must decide between doing the right thing, or saving face with her parents. Imogen struggles with Jack’s honesty about her sexuality.

1417: Get It Together
Becky and Jonah make a great pair when it comes to music, but they’re finding romance to be a trickier pursuit. Becky isn’t sure how to deal with her feelings, especially where her faith is concerned. Maya is relying on gym class to bring up her average, but her dance partner is making things difficult. When Dallas needs a babysitter for the night, Clare agrees to look after Rocky. Even though Clare thinks it’ll be a piece of cake, babysitting turns out to be harder than she thought.

1418: Give Me One Reason
Maya knows the house rules, but she can’t stop thinking about Zig. She wants to keep her promise to her mom, but the feelings are hard to ignore. Clare is distraught after a recent tragedy. In an effort to shield herself from grief, she embarks on an impromptu trip to New York, along with an unwitting passenger. Hunter has a crush on his friend Arlene, but unfortunately, romance isn’t his strong suit. Imogen convinces him that a grand gesture is the perfect way to get Arlene’s attention, but Hunter isn’t so sure. He could risk losing Arlene’s friendship in an attempt to win her love.

1419: I Wanna Be Adored
Clare’s been absent from prom committee meetings, and Alli is starting to get worried. Something is up with her best friend, but somehow Alli isn’t in the loop this time. Zig needs somewhere to go, seeing as his mom isn’t ready to take him back just yet. Tiny and his brother Vince take Zig in, but Zig is unprepared for the lifestyle adjustment. Tristan is trying online dating, but his profile isn’t getting much action. After some “adjustments”, he catches the attention of a handsome suitor. The only problem is Tristan is nothing like his new profile.

1420: Teen Age Riot
Maya wants to visit Zig at his new place, but Zig is hesitant. With the sort of things his housemates are involved in, anything could happen. Clare is nominated for valedictorian, something she’s been picturing since she first entered high school. Too bad something else has caught her attention. Seeing her nomination speech as an opportunity, Clare decides to shine a light on the questionable practices in the school, even if it means risking her own future. Frankie loves being in the musical, but she’s having some issues with her leading man. She’s finding it impossible to be professional, and the turbulence is ruining something that was supposed to be a good time.

1421/1422: The Kids Aren’t Alright
Zig learns the truth behind some recent events, and now he’s an accomplice to a crime. With opening night fast approaching, Frankie finds herself falling for Winston all over again. Given their rocky past, she’s determined not to get hurt this time around. Frankie comes up with a plan to test Winston’s fidelity. Becky is happy with Jonah, but Drew isn’t having it. He’s convinced that Jonah is not a good guy, and he’s trying to prove that to Becky.

1423/1424: Finally
Drew plans an elaborate last minute prom-posal, and Dallas makes a mistake that could ruin everything for Alli’s prom. Drew agrees to help him salvage Prom, and is punished. Miles tries to help Hunter in the matters of the heart. Imogen has managed to win Jack back, but her happiness is fleeting. Clare is still unsure of her future plans, including where she stands with Eli.