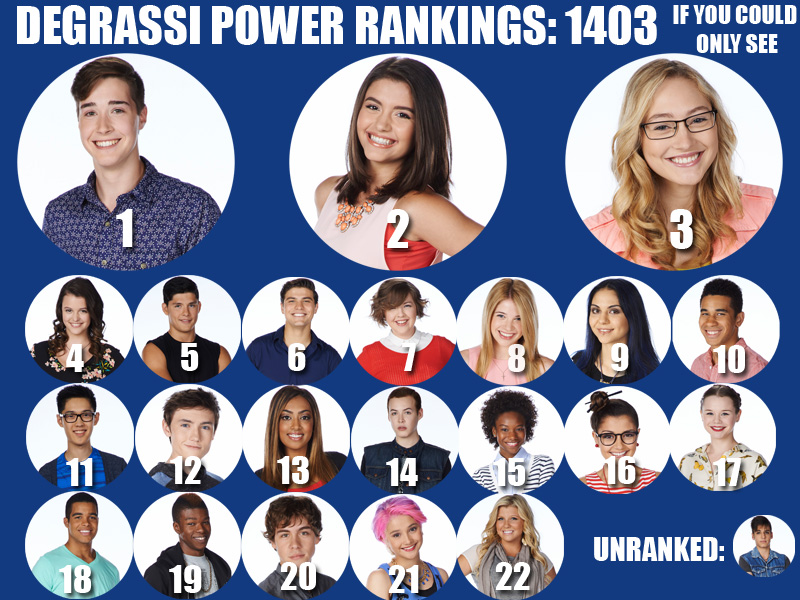 1) Miles Hollingsworth (Last week: #1)
He only appeared briefly in If You Could Only See, but his emotional reaction toward Maya’s “nosiness” ensured his position at the top of the power rankings.  In 1402 he seemed to have given up, and now he’s just being stubborn toward any possible help since he views doing anything to change the dynamic with is father as futile.

2) Zoë Rivas (—)
The effect of Zoë’s sexual assault doesn’t linger, it’s a gigantic cloud that Zoë’s riding on and now consuming others with.  The amount of actual power Zoë wields on this show is absolutely INSANE.  If you’ve been paying attention since Zoë took over the cheerleading squad, those girls (excluding Jack and Frankie) have been blindly following her around like lost puppies, hanging onto her every word.  These are young, impressionable girls whose “leader” is leading them down a very dangerous path.  Degrassi Nudes is a ticking time bomb, and the only question now is how will it blow up in everyone’s faces.  Worst case scenario is Simpson finding out, because then we’re looking at suspensions and legal ramifications, since they are distributing child porn after all.

3) Maya Matlin  (#4)
Oh hey there, long-running continuity.  Maya still can’t get over Cam’s death and the fact she didn’t catch the warning signs and didn’t do enough to possibly save his life.  She’s now projecting all of those fears onto Miles, but right now he’s in denial and unwilling to talk about his problems or get help.  What I did love is that Zig came into the room right after Miles blew up at Maya, reminding her that he would currently be worse off if she hadn’t intervened as aggressively as she did.

4) Frankie Hollingsworth (#7)
I’m really enjoying season 14 so far, but I’m having a really difficult pinpointing WHY.  It’s one of those things where everything just seems to be on point; the characters are interesting and so are the storylines.  I know a lot of people think season 13 sucked, but I also think fans really underestimated the effect of Jordy suddenly leaving the show and the ripple effect it had on a majority of season 13.  So far in season 14, Degrassi seems to be free of that messy cloud.

And that leads me into Frankie and her storyline in 1403.  This is one of those plots where there isn’t just one central idea to focus on…there are multiple things happening in this plot, and they’re all interesting:  1) Frankie is a good girl; she’s smart, gets good grades and stays out of trouble.  We see the clear double standard in the way she’s perceived and treated by her mom and how Miles is treated.  Simply put, she’s not trusted to protect herself and make responsible choices, despite the fact we literally watched her make a smart choice with Winston. 2) I was hoping for young, innocent plots involving Frankie and Winston, and we got it.  These are two inexperienced teens who are smart enough not to rush into anything.  Also, Frankie said “No” to Winston’s attempt to reach second base, and he complied without questioning her decision.  3) Zoë’s got her own personal reasons for operation “Degrassi Nudes,” and Frankie’s the only person on the squad who was vehemently against doing it.  But as we see, no matter how smart someone is, peer pressure is a very powerful force. It’s easy to say you won’t do something until social pressure becomes a factor, especially at Frankie’s age.  4) I don’t think Frankie would’ve actually sent a nude pic if it weren’t for the second conversation she had with her mom.  It’s one of those “angry in the moment” things where she decided to do it simply to retaliate against her mom’s stupidity.  5) Oh Lord, let’s not even go there when Frankie realized her brother Hunter is one of the guys requesting nude Oomfchats.  But I think that’s the breaking point for Frankie, and I would actually like to see her be the one who blows the squad’s cover.

5) Zig Novak (—)
I guess Zig’s character is an example of being unable to pinpoint specifically what’s great about season 14, because there’s so many good things happening.  His and Tiny’s response to Miles’ sexuality was 100% believable. They view him as just “liking guys” now, and joked about Miles “being turned gay” when we know that Miles’ sexuality is far more fluid.  Then in the same breath, Zig realizes Maya’s genuinely upset after her outburst in the rubber room, and he shows his appreciation for her later in the episode.  His casual commentary about Miles’ sexuality is stupid, but it also doesn’t make him a monstrous homophobe.  It’s too easy to get caught up in labeling characters as either good or bad based on specific behavior, when an overwhelming majority of us in the real world reside in a gray area.  We do good things and we all also do bad or stupid things, and I like how Degrassi presented both sides through a character in a single episode…it’s realistic.

Oh, and bonus points for Degrassi for getting edgy with its dialogue and having Zig say, “Moneybags is a dick.” Too bad they had to replace it with “dork” in ADR.

8)Becky Baker (—)
Just keep in mind that at the moment, Becky has no one. I assumed Drecky would be dead after 1402, since Jonah will appear sooner rather than later.  Oddly enough, Drecky reuniting in 1403 makes more sense than the rushed development of Drecky during Zoë’s sexual assault trial.  That guy Becky tried to date reminded her way too much of who she used to be and what she’s lost since the trial.  It doesn’t matter how complicated things are with the Clew baby…Drew is familiar territory, and at this point in time familiar is better than being alone.

9) Grace Cardinal (#12)
Fans love to place too much value on the amount of screen time characters receive.  The generic way of thinking is if you receive a bunch of time, that means you’re the most important; if you don’t, you’re completely useless. As far as I’m concerned that’s way too simple of a mindset to look at things…to an extent.

If a certain character gets a bunch of storylines in a season, that means nothing to me in terms of their overall value. It’s all about the QUALITY of screen time that matters to me in the landscape of a 30-minute episode.  Grace appeared in a handful of scenes in 1403 and slayed all of them.  Hunter was effective in his role that helped shape the Hollingsworth family scenes.  Shay Powers only had a handful of lines, but one of them ended up being hands down the most memorable line of the night and of season 14 so far.

It’s almost a curse to hope your favorite character becomes a major character, because even since the TNG days Degrassi has a tendency to take characters and run them into the ground with A-level exposure (“character fatigue” has been happening every season since at least season 4).  At the same time you can’t give everyone equal screen time because then you have a bunch of half-assed characters running around, development wise.  For all of the Clare’s and Connor’s of this show there are characters who navigate somewhere in the middle:  Grace KILLS the limited amount of screen time she receives, as does Mike Dallas.  I’m not saying she shouldn’t receive plots of her own. If she receives some, that’s okay. If she doesn’t, that’s okay too (bringing up potential archs then doing nothing with them, aka Dallas and his kid, is not okay though).  But my point is that Jake Martin, who never really had a major arch of his own, proved that you don’t need to be a major character receiving tons of development through your own storylines to be important, make an impact and be well loved by Degrassi fans.  Do not undervalue or underestimate the power of secondary characters.

11) Winston Chu (#14)
Kudos to Winston for being an understanding boyfriend in 1403.  A couple of years ago I threw out a Degrassi brainstorming idea about them tackling a romantic relationship destroying a friendship.  I’m very excited to see if that’s what will go down between Winston/Miles/Tristan next week in 1404.

15) Shay Powers (Unranked)
“No boy’s worthy of my room.”  BEST QUOTE OF THE NIGHT.  I also loved her delivery of that line.  Hazel’s role was restricted and Chantay was barely used until her latter seasons.  Liberty Van Zandt is the closest thing this show’s had to an A-level black female..fingers crossed Shay can surpass that.

16) Imogen Moreno (#18)
Great support by Imogen for Becky in this episode.

How important is God in your life?
BECKY: Well he hasn’t been here for me lately…
IMOGEN: …because he works in mysterious ways.

How close are you to your family?
BECKY: They used to be my rock…
IMOGEN: …and they will be again.