If you’ve been paying attention to the news recently, then you already know what’s happened with former NFL star Ray Rice.  Video surfaced of him knocking his wife Janay unconscious in an elevator, then he dragged her into the hallway.  He’s been suspended indefinitely from the NFL, but Janay released a statement today defending him and ripping the media:

**********
“I woke up this morning feeling like I had a horrible nightmare, feeling like I’m mourning the death of my closest friend,” Janay Rice wrote. “But to have to accept the fact that it’s reality is a nightmare in itself. No one knows the pain that [the] media & unwanted options from the public has caused my family. To make us relive a moment in our lives that we regret every day is a horrible thing. To take something away from the man I love that he has worked his ass of for all his life just to gain ratings is horrific.

THIS IS OUR LIFE! What don’t you all get. If your intentions were to hurt us, embarrass us, make us feel alone, take all happiness away, you’ve succeeded on so many levels. Just know we will continue to grow & show the world what real love is! Ravensnation we love you!”
**********

Now there’s a trend on Twitter called #WhyIStayed, where women are sharing their personal stories of domestic abuse.  It’s terrifying and heartbreaking, and these stories resonate with what we saw with Alli Bhandari in season 13.

Alli’s abuse storyline is one of the most memorable plots from season 13.  It started off terribly in 13A, with Alli supposedly in a “fairytale romance” that in reality was very pedestrian to us viewers.  I’m not sure what the writers’ intentions were with the beginning of Alli and Leo in terms of how they wanted viewers to feel about the couple, but at the end of the block the show introduced a dark element to this storyline, transforming Alli’s dream into a nightmare.  Over the course of 13B and 13C we saw Leo’s anger escalate, as Alli continued to forgive his violent outbursts.  This girl became trapped in something bigger than herself, and became more than just the “book smart, boy dumb” girl she’s always been.

I’d written this piece long before yesterday, but now is as good of a time as any to post it.  It’s in response to a submission on the Degrassi Confessions tumblr, where an anonymous fan effectively blamed Clare Edwards for allowing Alli to get abused by Leo as much as she was.

The fun thing about bad situations (sarcasm) is that people instantly seek to choose sides and/or assign blame instead of understanding.  Let’s blame Alli for being dumb and “full of herself,” she should’ve never taken Leo back after Paris.  How dare Clare not know her friend is being abused, despite the fact Alli was actively hiding it.  Let’s take time to cast our armchair-quarterback judgment on everyone except for the asshole who deserves it the most.

Below I’ll explain why the following confession is absolute nonsense.

Ah yes, life as a Degrassi fan wouldn’t be complete without reading some irrational criticism of Clare Edwards.  I get that people dislike characters, but criticism of the Clare/Maya type is taken to such a ridiculous, nitpicky level at times.  Regardless of what type of character they’re established as, most Degrassi characters are basically set up to be seen as people who are good at heart, but constantly make poor choices.  So I feel like when these characters are doing something stupid they should be called out, but they should also be given credit where credit is due, and Clare handled this situation with Alli as well as anyone.

Just to assure you that I’m not being some crazy Clare defender, let’s take a quick look back at seasons 11 and 12.

After Clare’s parents announced they were getting divorced, Clare went through a phase where she basically lost her damn mind.  She was understandably hurt, but at times she became an overly self-absorbed jackass, who at one point even had the gall to tell Alli to her face that Alli’s problems weren’t as important as hers.  In season 12, Clare received some writing advice from Asher and then decided to arrogantly look down on Adam, Connor and the “pedestrian” assignment they were working on.  There’s no denying Clare can be absurd at times.

You don’t like Clare Edwards? That’s fine, but those character traits she’s said to have (whiny, bratty, selfish etc.) have nothing to do with this specific situation, one in which Clare is being accused of being self absorbed in a corner somewhere instead of being clairvoyant or following Alli around 24/7.  If we’re going with the insane idea that Clare should’ve magically “figured out” that Alli was being abused, we might as well go ahead and blame Jenna Middleton too, who saw warning signs of abuse long before Clare was even remotely aware.

Now this isn’t going to turn into a “let’s bash Jenna” moment from my point of view, because I view the situation as being far more complex than just assigning blame to someone other than the scumbag responsible.  Jenna’s perspective was also unique in multiple ways:

1) She saw Alli’s bruises as they were leaving Paris.  At that point the assumption would be that there’s no reason to take action, because it was assumed they’d never see Leo again.

2) Jenna was angry at Alli for taking Leo back when he first arrived to Toronto, and didn’t want to talk to her until Clare moderated things.  There are many factors in the gap between Clare and Jenna’s POV at that point (namely Jenna seeing Alli’s bruises firsthand), but all that went out of the window in a conversation where Alli went on the defensive and criticized the past actions of Clare and Jenna’s boyfriends.

But to fully understand this situation and how both Clare and Jenna play into it, you’ve gotta have a clear grasp of how Alli behaved throughout this abuse storyline.

Alli constantly downplayed Leo’s aggressive behavior and hid the truth of his abusive tendencies from her friends and family, believing they would ruin this “epic romance” if they knew what was happening.  She wanted to handle things on her own because she loved Leo and was truly convinced he could change.

When they returned to school and Alli revealed that Leo was in Toronto, Jenna called Alli out in front of Clare, even mentioning the bruises Alli received in Paris.  Alli talked her way out of it by downplaying Leo’s anger, and by pointing out the insane things both Clare and Jenna’s boyfriends have done in the past (Eli crashing his hearse, Connor stealing panties).  That was enough to begin the process of Alli actively convincing Clare and Jenna that what happened with Leo in Paris was just a misunderstanding, and he’s not an abusive monster. 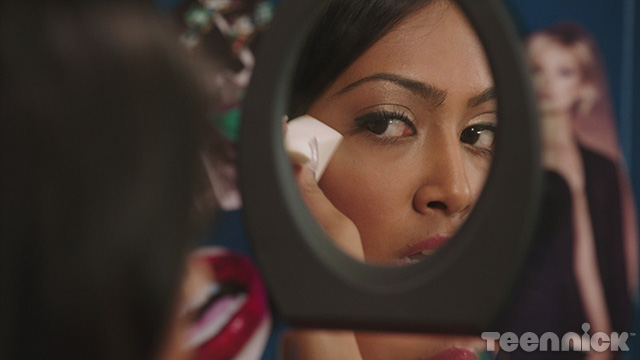 After Leo slapped Alli, she went out of her way to cover it up with makeup and avoided going into detail with Clare and Jenna about what happened.  When Leo beat the crap out of Alli, she lied to everyone and said she’d been mugged.  Alli confirmed Jenna’s suspicions that it was Leo, and Jenna threatened to call the police.  In this storyline, Jenna played the role of being a passive supporter for Alli.  Alli begged her not to call the cops, so instead Jenna physically sat there with Alli as she told Leo over the phone that their relationship was over.

Once Leo started harassing Alli by messaging her and showing up at Degrassi, she was forced into telling Clare what happened.  Alli insisted (again) on handling Leo on her own, but what did Clare do?  She told Alli they were going to call the police, and they did.

This confession is misguided in that it assumes Clare should’ve just figured it out all on her own before it reached the point where Leo beat up Alli on their wedding day.  The problem is, just like with the wedding, Alli continuously went out of her way to keep Leo’s abuse a secret until it was impossible to hide.  And to be clear, there is nothing self absorbed about Clare focusing on the things she was dealing with in her own life as Alli’s situation was going on (dealing with the lingering effects of chemotherapy, preparing for university, issues with her own boyfriend).

But the moment Clare realized the severity of Alli’s situation she intervened, refusing to accept any of Alli’s excuses for Leo.  If Clare hadn’t done something after seeing Leo had bashed Alli’s face in then you’d have a reason to jump all over Clare.  However, in this case Clare Edwards should be recognized for what she did do (stepping up at a critical time to help a friend who couldn’t help herself), not chastised for what she didn’t do based on an unrealistic expectation of how she should’ve behaved.