NextDegrassi Episode Review: Out Of My Head
Degrassi

Today’s been an interesting day in terms of Degrassi news.  Let’s get to the good stuff first. 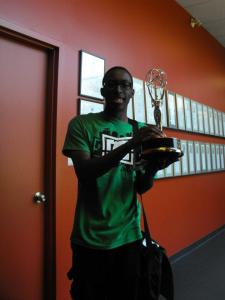 Me holding Degrassi’s International Emmy. Though being nominated several times, the show hasn’t won an Emmy since 1987.

The Emmy nominations were announced this morning, and Degrassi was nominated for Outstanding Children’s Program.  It’s going up against Nick News with Linda Ellerbee, Dog With A Blog and Good Luck Charlie (Disney Channel), One Last Hug: Three Days At Grief Camp and Wynston Marsalis – A YoungArts Masterclass (HBO).

Could presenting itself under the Nickelodeon umbrella help its chances?

If After Degrassi Canceled?

There was a BIG shakeup at MTV Canada and MuchMusic yesterday as Bell Media cut 91 jobs within its company, including firing Much VJ and After Degrassi host Lauren Toyota.  The Globe and Mail reports that the layoffs were part of Bell Media’s plan to cut up to 120 jobs in advertising and subscription TV services due to “financial pressure.”  MTV and Much were said to suffer substantial losses due to the sweeping cuts.

The reduction in staff also looks to have an impact on the Degrassi community.  When asked about the fate of After Degrassi, Lauren tweeted fans saying it’s been canceled.

The news of these cuts also explain why there has been no announcement from MTV about the Degrassi Parking Lot party.  The other day Stephen Stohn implied that they hadn’t heard anything from MTV.  If MTV is to host the party, it would happen on Tuesday, July 29.

If not, the Stohn said Epitome would try to host something on its own.

@TrueJenna if the broadcaster doesn't do something, we will try to do something! Maybe not the same, but something