MAYA PLOT RECAP:  Miles isn’t happy when he discovers Zig is now living at Maya’s house.  Maya begs Miles to give getting to know Zig a chance, and he reluctantly agrees.  However, Zig has no interest in doing the same when he turns down Maya’s invitation to hang out at the semi formal with her and Miles.  The move upsets Maya, who tells Zig that she thinks Miles is a better guy because he’s at least willing to try.  Zig does end up making it to the dance, and there’s tension between him and Miles; Zig doesn’t hide his feelings for Maya, and Miles is convinced Zig is a drug dealer.

Later, Mr. Perino approaches Zig and tells him it was reported that there might be drugs in his locker.  Grace immediately believes Miles is the one who snitched, and he confesses.  Maya is livid, and tells Miles that she needs time to think about their relationship.  At home, Maya apologizes to Zig for what Miles did, but Zig tells her there were no drugs in his locker to begin with.  Zig also tells her that he should’ve kissed her on the day he told her he’d wait for her, then he walks away.

Degrassi uses an entertaining technique where they use two parallel scenes to explain to Maya why going to the dance with both Miles and Zig is a bad idea.  Both Tristan and Zoë as well as Grace and Tiny highlight the inevitable rivalry between Miles and Zig, and yet Maya’s still completely clueless.  At this point it seems like she’s just helping out a friend, and all she wants is for that friend and her boyfriend to live in harmony.  However, we all know that’s not going to happen.  Zig still has feelings for Maya.  The opening scene of the episode shows a gentler Zig as he and Maya bond over breakfast.  However, from the moment Miles shows up at Maya’s front door it’s as if Zig transforms into the character we’ve seen throughout season 13; he becomes bitter and resentful.  It makes for an exciting conversation though between him and Miles at the dance, one where Zig puffs out his chest and openly flaunts his feelings for Maya.  “Well it’s gonna be hard to stay friendly with someone when you sleep down the hall from them,” Zig says, clearly just trying to get under Miles’ skin as foreshadowed by Grace and Tiny.

It’s interesting how Maya views the two guys in her life who spend the episode being jealous of each other.  “Miles thinks Zig is a bad guy, but he just doesn’t know him,” Maya says early in the episode.  At the end of the episode she says to Zig, “Miles, he’s not a bad guy, though I don’t know why he’d do something like that,” referring to Miles telling Perino there’s drugs in Zig’s locker.  Meanwhile, somewhere in the middle we watch Miles and Zig resort to vindictive behavior, Miles with his actions and Zig with his words.

There’s enough tension in the plot to keep it enjoyable, even though the story doesn’t really go very far.  It’s become customary as of late for Maya and Miles to wind up in some type of argument, one where they’ll kiss and make up later.  Zig’s brooding over Maya again, this time wedging himself between Matlingsworth.  “You remember when I told you I’d wait for you?” Zig asks Maya.  “Well I shouldn’t have said that; I should’ve just kissed you.”  While it’s clear where Miles and Zig stand, we’re left wondering what’s going through Maya’s head.  It’s a cliffhanger I don’t mind for the time being.

JENNA PLOT RECAP:  Jenna is still bothered by the attention the niner girls are giving Connor after his makeover, so to make sure he still wants her Jenna shows up to the semi formal in a dress that’s too tight.  Jenna and Connor are named king and queen, and while celebrating Jenna’s dress snaps, exposing her breasts.  Jenna’s embarrassed and upset that she let the niners make her jealous, but Connor tells her he has no interest in any other girl and also tells her that he loves her. 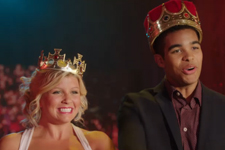 This plot is even more simple than it was in What It’s Like.  One of my favorite quotes is the idea that “There is no reality; only perception.”  The reality that viewers see is Connor’s receiving attention from girls, but he has zero interest in them, and there’s never any threat of Connor’s eyes wandering.  Jenna’s reality is completely different; she’s having trouble coping with new-found attention her boyfriend is receiving, and it’s starting to make her feel self conscious.  “I need to look hot tonight,” Jenna says.  Of course Alli is the voice of reason, saying “Connor would love you even if you looked like a giant cupcake,” but Jenna doesn’t listen.  Jenna squeezes herself into a dress that’s too small, and it takes an embarrassing nip slip for her to realize she let someone else’s behavior (the niners) dictate her, similar to how Miles allowed Zig to get under his skin in this episode.

Jenna and Connor are adorable as a couple.  They work well together because they truly accept each other.  When told about the niner girls flirtatious ways Connor says, “They only like me now because I’m conventionally dressed. You liked me before then.”  It’s weird how little screen time this couple has received compared to others, but based on what we’ve seen when Jonnor drops the “L” word, there’s a definite sense that it’s for real.  Connor seems like he would never tell a girl he loves her unless he truly meant it.

BECKY PLOT RECAP:  Jack wants to ask Imogen to the semi formal, but Becky tells her that Imogen already has a date.  While Jack isn’t convinced Becky is a lesbian, Jack warns Becky that leading Imogen on could backfire.  Becky and Imogen are having fun at the dance, but when it’s time for them to slow dance together Becky comes clean.  Imogen is actually relieved because Becky is the first platonic female friend she’s ever had at Degrassi.  Later, Becky tells Jack that she was afraid of losing Imogen’s friendship, and encourages Jack to dance with Imogen. 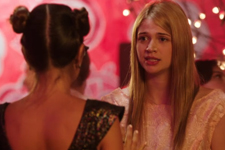 Becky finally realizes she’s painted herself into a corner by asking Imogen to the dance.  Her wording implied that she’s interested in Imogen romantically, though she’s really just jealous of the idea of Imogen and Jack spending time together.  It’s funny that Becky would even be able to entertain the idea of pretending to be a lesbian, given how wet behind the ears she is when it comes to life in general.  Her jealousy is strong enough to play head games with Jack, but in the end it’s not enough to help Becky actually follow through with any of it.  “I thought I could dance with you and maybe pretend to be a lesbian but I can’t because I’m not,” Becky says to Imogen.  Imogen’s sigh of relief isn’t surprising, because she actually seemed uncomfortable with the idea of a possible romance with Becky when asked to the dance in What It’s Like.

Imogen and Becky’s conversation after the big reveal is an important one.  These are two solo characters who were brought together after the death of Adam, primarily because they had no other friends.  A lot of their friendship has been off screen, but it’s not surprising that they’re close given that they work on Degrassi TV together.  Degrassi fans’ number one complaint about the show is the relationship drama and Degrassi pairing up characters who will eventually date, but that doesn’t happen here, and we even get an explanation as to why.  “You’re my first girl friend at Degrassi who isn’t my girlfriend, if you know what I mean,” Imogen says.

It’s fantastic to hear Imogen bring up her former relationship with Fiona, one where they were close friends before they dated.  “Me and Fiona were inseparable…but now we barely even talk,” Imogen says.  Becky says that’s sad, and when you think back to those days when Fimogen graced the halls of Degrassi together, it really is.  Though for different reasons, Becky and Imogen were ultimately in the same place mentally, both afraid to lose their friendship because of a relationship.