NextDegrassi Promos and Promo Pics: What It’s Like (1325)
Degrassi

Writing a review for this type of episode is hard, because all of the “plots” are focused around the same central idea: What happened to Zoë at Miles’ party?  Essentially the story is a collection of point of views from various characters, and they all blend together to make tell one cohesive story.  I’ll hit the recaps of each point of view, then get into more detail about this episode.

Zoë’s POV: Zoë wakes up naked in the Hollingsworth pool house.  She has no memory of the night before, but Frankie shows her pictures on Hastygram that showed Zoë having a wild time at the party.  Rumors are going around that Zoë had sex at the party, but she denies it and remains focused on her Degrassi Sing Off routine with Frankie and Keisha.  However, a video surfaces of her drunk and being taken advantage of by two unknown guys.  The graphic images are too much for her to handle emotionally, leaving her unable to perform her routine.  When questioned by police she tells them she doesn’t remember what happened.  She receives an exam at the health center and discovers she’s been raped.  After the school’s pep rally has been canceled because of the sexual assault, Zoë becomes an outcast as people blame her and think she lied about getting raped.  She’s later confronted by Luke, who confesses to sexually assaulting her and begs her to drop the accusations before it ruins his life.  Zoë keeps quiet until she spots Luke flirting with Frankie; Zoë confronts him in public and reveals he’s the rapist.  Becky comes to Zoë’s side and reveals she has evidence that confirms Luke is guilty.  The next day, Zoë is greeted by Drew, Dallas, Miles, Maya and Tristan.  They all offer to stay with her throughout the day so that she doesn’t have to be alone. 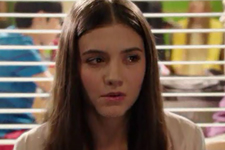 All of the actors nailed their parts in this episode, led by Ana Golja, whose character was placed in a horrifying position.  Zoë is someone who’s good at putting on a facade, but not even she can pretend as if what happened to her is no big deal.  The more she tries to convince herself that everything will blow over, the more material is leaked, offering up more gory details about a night she can’t remember.  As the episode progresses we see Zoë become more isolated from everyone else; she’s the victim in all of this, yet she’s the one treated like an outsider.  The first scene between her and Luke is brilliant.  By this point she just wants everything to go away, while Luke just wants to avoid getting in trouble.  “No one’s gonna believe you anyway,” Luke says.”  I’m a good Christian guy, I’m a hockey star, I’m on the basketball team; look, you’re gonna ruin my life if you keep this up.”  Zoë delivers the perfect response. “Mine’s already ruined.”

The second and final scene between them is even more brilliant.  Zoë seems content to live a life of shame and misery, hiding the truth about what happened to her, until she sees Luke hitting on Frankie.  It’s an emotional scene as we see Zoë take back the power she’d given to Luke when she agreed earlier not to pursue charges.

Becky’s POV: At Degrassi, Becky sees pics of Zoë drunk at a party and decides to do a Degrassi TV story about teens and alcohol.  However, she can’t get anyone to admit on camera that they drink.  She discovers a video posted by an anonymous hacker that shows a drunk Zoë being sexually assaulted by unknown guys at the party.  With the help of Imogen and Drew, Becky collects pictures and questions everyone who attended the party.  They receive another anonymous video, this time it’s footage of Miles and Winston carrying Zoë into the pool house.  Becky assumes they’re the ones responsible and shows the video to Simpson, who instead of allowing Becky to air her story, calls the police.  The cops interrogate everyone and determine Miles and Winston didn’t rape Zoë.  Becky feels guilty for falsely accusing Miles and Winston, so she continues her own investigation even though the cops are now involved.  With no leads, the anonymous hacker’s identity is revealed: it’s Grace.  She helps Becky with a plan to discover the identities of those who assaulted Zoë.  Later, Becky and Imogen overhear Luke and his friend freaking out because they think someone knows they’re the ones responsible.  Becky casually asks an unsuspecting Luke for his phone, and finds more graphic pictures and video of Zoë.  She’s conflicted on whether or not to turn her brother in, but she decides to report him once Zoë confronts Luke in front of everyone.

Becky’s perspective is unique because by the end of the episode, we see there’s multiple layers to how she’s being used and they all have an effect on her.  She starts off as being a shining example of just how naive and disconnected society can be in general.  “Girls have to know if they get drunk, that they’re responsible for their actions,” she says as she pitches her D-TV segment idea about teens an alcohol to Imogen.  Becky’s right when she questions if she’s clueless; she’s initially unaware that everyone she’d interviewed about drinking had lied to her on camera, and Drew has to explain to her that people can black out when they’re drunk.  Once she concludes that Zoë was assaulted, she’s motivated more by a desire to produce a great story than she is to provide any kind of justice for Zoë.

Once Becky falsely accuses Miles and Winston, we see her become vigilant, wanting to make up for her mistake by finding the real culprits.  However, she runs into a dark twist when she discovers her brother is one of the two guys involved in the assault.  It’s devastating news that she can’t accept at first, until she watches one of the videos of Zoë on his phone.  While she seems unsure of what to do, she ends up doing the right thing even though it will destroy her family as she knows it.  “It’s not going to be easy, but it’s important to do what right,” Becky says to Zoë.  Often times the right thing is the hardest thing to do.

Miles’ POV: After screwing up things with Maya, Miles tries to apologize to her with a gift, one she promptly rejects.   Miles’ love troubles leave him unfocused for the basketball team’s playoff run, so some of his teammates agree to come up with ideas to help him win Maya over.  He and the basketball team sing a song for Maya at the Sing Off, and it works.  However, Miles and Winston find themselves in trouble when they’re accused of sexually assaulting Zoë.  Once they’re vindicated, Miles is back to wanting Maya’s forgiveness after she sees the photos of Miles carrying Zoë at the party.  He tries to get Zoë to straighten things out with Maya, but Zoë blames him for leaving her passed out and unattended at the party.  Miles tries to confront the team about the allegations, but when they blow him off he decides to skip the game.  Afterward, he reconciles with Maya and the two approach Zoë to make sure she’s okay.

As you would expect from anyone in his position, Miles is so wrapped up in trying to win Maya back that he’s completely oblivious to what’s happening with Zoë.

Why would he care about someone else’s problems when he has his own to worry about?  That’s his mentality, and while it’s easy to judge him harshly for it, acknowledging that we’re all guilty of that fairly regularly is a fact that’s sad, but true (a fitting phrase, given that the second half of this episode was originally titled “Sad But True”).

But like most people, Miles doesn’t react until he receives a wake up call.  While he’s clamoring on to Zoë about trying to win Maya’s forgiveness, Zoë holds him accountable for leaving her alone while passed out. “I did nothing,” he says.

“Exactly,” Zoë says.  “You saw how drunk I was and you did nothing…left me somewhere.”  His diffusion of responsibility at the party no longer holds up when he’s face to face with Zoë, and sees the pain in her eyes.

It happens to other people.
You say “How sad.”  You say “Poor thing.”
But when it’s you it’s something else; it’s everything.

Paige Michalchuk sang those lyrics after being raped in the season 2 episode, “Shout.”  It’s amazing how relevant those words are to this day, over eleven years later as another Degrassi character is sexually assaulted.  “Unbelievable” is an accurate title for this episode.  It’s unbelievable that people at Degrassi blame Zoë for what happened to her at the party.  It’s unbelievable that no one really seemed concerned with Zoë’s well being.  It’s unbelievable how disturbingly realistic Degrassi was able to portray these two attributes. 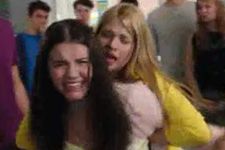 Degrassi hammered two major themes throughout this one-hour episode: “blaming the victim” and the sheer nature of humans to be indifferent toward a situation that doesn’t affect them directly.  Once the pep rally is canceled, rumors begin flying that Zoë is to blame.  They say she slept with guys at the party, regretted it, then cried rape.  Students didn’t question it; nearly all of them had no desire to investigate.  It was accepted as fact, while the truth was lost in the shuffle of people upset because a fun school event was canceled.  It’s weird watching that unfold in this episode, because that mentality perfectly describes how people behave regularly on social media nowadays.  Even if on a less-serious scale, every single day random rumors or half truths pop up.  No one cares enough to do any research on their own, but everyone cares enough to react instantly and harshly, then go about their day as if nothing happened or no one was hurt.

While the general student body blames Zoë for something that’s not (and never will be) her fault, Degrassi’s main characters simply trivialize the situation.  “Why do you even care? You barely know Zoë,” Imogen says as she, Drew and Becky continue investigating Zoë’s assault, even after the police get involved.  Becky is determined to figure out the identities of the two boys, but before that point her primary motivation was to uncover a hard-hitting story so she could be taken seriously as a journalist.  Miles is so consumed with getting Maya back that he doesn’t even try to hide his indifference.  “Do you know what it’s like not knowing what happened to you?” Zoë says.  “Not knowing if someone touched you?”

“Yeah I can’t imagine, but it’s not my fault,” Miles replies.

In another intense scene the student council discusses whether or not to have the pep rally because evidence points to guys on the basketball team being involved.  While Dallas and Drew support the team, Clare is adamant in standing up for Zoë.  “It wasn’t just two guys Drew; everyone at this party let this happen, you let this happen,” Clare says.

The progression of characters coming around and finally understanding the gravity of the situation is slow, but watching the characters moving at different paces toward this is amazing.  They finally reach that point we shouldn’t hesitate to reach, rallying around those who need help instead of showing indifference toward their plight because it doesn’t hit close to home.