See Your Tweets On Air During Degrassi’s Show & Tell Marathon

While the Degrassi fandom has been busy freaking out over the .0228393 second clip of Eclare in the above promo, everyone pretty much ignored what the promo was about…the upcoming Degrassi marathon!

As stated in the last post, TeenNick will be doing a 13A “Show & Tell” marathon in the days leading up to the premiere on Thursday, October 3rd.  They’ll be airing two episodes a night during the primetime slot from 9pm – 10pm EST (which is how Degrassi should be aired nowadays, but the show wants us to continue believing it’s a 30-minute program even though it hasn’t been since season 9).  The TV listings for the next week are being weird, so here’s what we can assume the schedule will look like:

See your #Degrassi tweets on TV! 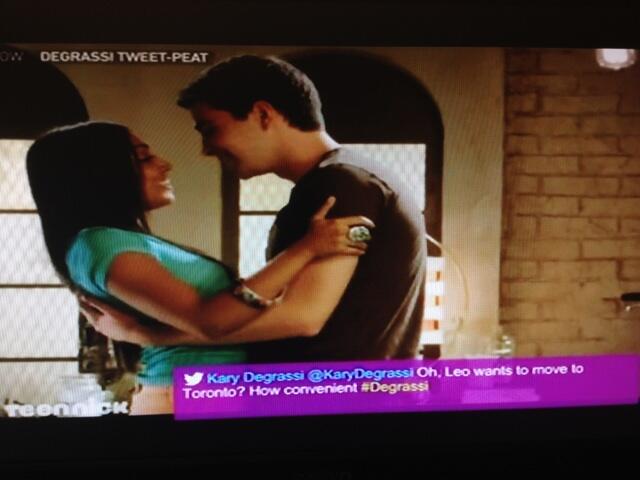 That one time one of my tweets randomly appeared on TV

One of the more underrated elements of season 13’s summer block was TeenNick’s “Tweet-Peat” episodes.  They’d rerun episodes, but tweets from fans would pop up all throughout the show.

Every night during the upcoming Show & Tell Marathon they’ll be posting fan tweets during every episode.  If you want to see your tweet on the air all you have to do is follow these simple instructions:

We're back Oct. 3rd! What do YOU think'll happen in the fall chapter?! Tweet your predictions using #Degrassi and they could appear on air!