Random Thoughts About Degrassi 13A

It’s safe to say that as a whole Degrassi season 13 has been underwhelming so far.  It’s not because the summer telenovela format we’re used to was ditched.  Since the implementation of the telenovela, the show has routinely had issues with episodes in the weekly format during the fall and spring blocks of seasons 10 and 11.  Each 30-minute episode needs to stand strong on its own two feet (regardless of whether it’s a Part 1 or Part 2), and things can be weird and felt off at times when every week you’re basically just airing half of an episode.  However, season 12 seemed to be the point where everything turned around, as the show churned out a solid block in 12B and a really good block in 12C.

After watching 13A, I’m just sitting here wondering “What the heck happened?”

I’m not too big on constantly comparing seasons to each other, but there’s an interesting find here.  The storylines in season 12 were pretty consistent with each other in terms of quality.  In season 13 there’s been a stark contrast between the storylines running alongside each other in these episodes, and that’s more apparent when I visually look at the grades I’ve given to these storylines: 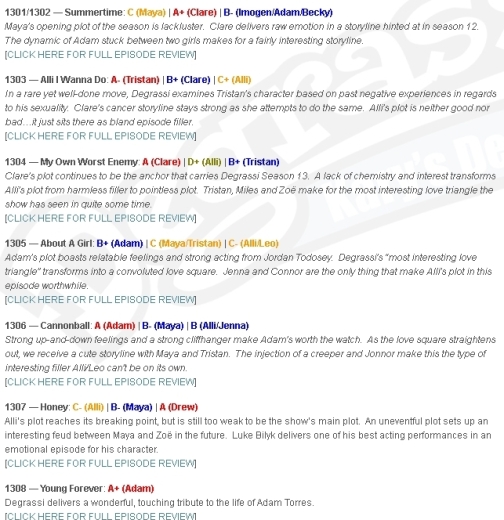 For the longest time I’ve graded individual plots within the episode and not the episode as a whole because I see the show as a collection of storylines, not episodes.  It’s also too difficult to just give a single grade that quantifies how I feel about everything in an episode when there’s so much going on.  My grades for Summertime, All I Wanna Do, My Own Worst Enemy and Honey make that point…how in the world do you give a single grade to those episodes when I feel like the quality of the plots is all over the place?

There were 4 major storylines this summer…let’s take a look at them all.

This is clearly the best storyline of the summer.  It’s powerful, scary and emotional, and I felt that every step of the way for Clare.  The only downside to this is that the meat of the storyline was really short.  I can’t remember who said it (probably Stefan), but the show doesn’t like to stack intense plots on top of intense plots, so now we see why Clare’s plot reached a climax after only four episodes (the final four of course dedicated to Adam’s death).  Though we got the general idea of things, I was hoping it would’ve been stretched out a few more episodes.  Clare’s cancer is in remission for now, but hopefully we’ll continue to see her deal with her health after this summer.

2) The Death of Adam Torres

Earlier in this blog post I said I view Degrassi as a collection of storylines, not episodes.  Isolate Adam’s texting and driving plot and view it on its own, and suddenly it’s not as horrible as everyone keeps saying (I’m talking specifically about the storyline standing alone, NOT any episode as a whole, behind-the-scenes issues or anything to do with Epitome’s reaction or lack thereof throughout it all).

Adam saw his girlfriend with another guy and freaked out.  It would’ve taken all of five minutes for Adam to actually contact Becky and have a conversation about the situation, but at least half of the drama in the Degrassi universe wouldn’t exist if people actually communicated with each other.  I still enjoyed Adam’s perspective through this situation.  People often forget that Adam is very inexperienced when it comes to girls.  I felt the anxiety he felt not knowing what the hell was up with Becky and Todd, and then not knowing the status of Beckdam’s relationship in Cannonball.  If you’ve ever experienced the anxiety of being so hyperfocused on one thing that it physically hurts, you should understand.

I’m not going to lie, despite the show wanting to show the dangers of texting and driving, the actual scene where Adam crashes seems a bit contrived (I contend there’s no way Adam should’ve still been driving in the woods at that point, and it’s weird that if the camp group is that deep in the woods, a random car would be driving in their direction on that one-lane dirt road at night).

As we all know, Honey was a very weird episode.  However, after several viewings I kind of understand the show positioning the plots as they did, even if no one liked it.

The entire plot in that episode was based around Drew and everyone impatiently waiting to hear the news about Adam’s surgery.  Sitting there not knowing anything about what’s going on is hard, because literally nothing else mattered.

What did Degrassi fans do while watching this episode? We sat around impatiently waiting to hear the news about Adam’s surgery.  Sitting there not knowing anything about what’s going on was hard, because literally nothing else mattered.  It’s just a shame that all of that time waiting was spent watching a plot very few care about (Alli), and while the Tenner’s plot was harmless, it was nothing more than filler that quickly wrapped up their Paris plot.

PARIS: The City of Love & Degrassi Kids Roaming Around Unsupervised

Did anyone actually enjoy Paris? That isn’t me asking a sarcastic question, I’m being serious.  If you did I’d love to hear why you thought so in the comments below.

I’ve said before that I’m not a fan of when characters are away from Degrassi for an extended period of time…my go-to example from now on is “dropout Drew” in season 12.  That feeling of isolation and distance from the school feels weird, and as bizarre as this sounds, the Paris plots did confirm for me how important the physical school is to this show.  I get that the show wanted to have an entire block of episodes take place during the summer, and there needed to be some sort of plot device to force certain characters into a group.  However, Paris as a backdrop was laughable at times, to the point where it was difficult to continuously suspend belief (if you ever wondered how the hell the characters were able to freely roam Paris whenever they pleased, you are not alone).  I don’t want the show to be discouraged from doing summer episodes in the future, so I will say that I thought the summer camp backdrop was absolutely fantastic.

If there were really good and really bad plots this summer, this is the one that falls somewhere in between.  Things got off to a rocky start in Summertime, but things became steady once the clan got to Paris.  I think it helped that the Tenners plot shifted on Tristan a bit in a unique way.  In All I Wanna Do we saw Tristan’s past issues as far as being rejected because of his sexuality, something I wasn’t expecting.  Miles is an extremely interesting character.  His presence is a boost to the show at the moment, currently abiding by the idea that “less is more.”  Things got weird once the Tenners plot transformed into the love square that we saw coming a mile away, and while it all panned itself out quickly I’m looking forward to more of Miles, as well as a feud between Maya and Zoë.

Speaking of Zoë and Winston, I don’t really have an opinion on them yet because they were featured so little in this block.

Degrassi revels in the fact that it deals with a lot of relationship drama.  The Degrassi fandom often talks out of both sides of its mouth on this issue:  we complain about how we hate that the show deals with so much relationship drama, but jump on twitter or tumblr at any given moment and a lot of posts are about [insert ship here].  Ships are what people in the fandom primarily bond and fight over.  That’s why it’s even more important for the ships the show presents to be worthwhile.

That’s where Alli and Leo have failed up to this point.  They’ve been boring and have lacked chemistry.  I applaud the show for making Alli self aware throughout this process.  However, that seemed to slowly float out the window as the block moved further along because as TeenNick put it, Alli is “book smart,” but “boy dumb.”  What turned from a tale of Alli using her past experiences to proceed cautiously with Leo suddenly became the two dropping the “L” word and Leo making plans to move to Toronto.

There were a couple of times, aka the beginning and end of their relationship, where the show created the kind of deliberate conflict between Alli and Leo that was almost nonsensical.  Not once, but twice (in My Own Worst Enemy and early in Honey) there was a miscommunication between them and Leo stormed off midway through Alli’s explanation, and for some reason she just let him.

We now know that Leo will indeed arrive in Toronto this fall, so the good news is their relationship can’t be any more pointless than what it was this summer…can it?

Is Anyone Excited About The Fall Block?

13A is one of those blocks where, as a whole, I know a lot of people will be trying to erase it from their memories.  Boy was there a lot of mediocrity, but there were also quite a few bright spots as well.  I understand those who aren’t excited about the fall block.  I started feeling burned out after 1305.  I’m looking forward to the mental break and focusing on other things for a bit before regrouping for 13B.  Based on the promo, some things I’m excited for this fall:

*ZIG IS BACK.  After being nonexistent all summer (Don’t worry, Ricardo always seems to be on set), I’m looking forward to seeing what’s in store for his character, especially after this tweet from Stefan.

“@DegrassiNessa: @stefanbrogren I miss Zig! Hopefully he's a big part of the rest of the season :)” Just say, you don't know Zig at all.

*WILL DREW HAVE A MELTDOWN? The Degrassi fandom will be watching very intently this fall, making sure that the characters closest to Adam Torres don’t “up and forget” that Adam ever existed.  Nothing against Becky, but I’m not even close to being as interested in her aftermath as I am for Drew.  A long story arch where Drew cannot cope with the death of his brother is one that hits fairly close to home for me personally, and it’s one I want to see.

*MORE ZOE AND WINSTON PLEASE. Several months ago some audition sides were leaked by someone unaffiliated with Degrassi or the Degrassi fandom.  There was stuff in there that revealed a Zoë plot that grabbed my attention because I think Zoë’s character could make it interesting, so I’m looking forward to seeing if it’s true.  I’m also looking forward to seeing more of Winston.  He seems to be treading that line of kind of nerdy and awkward, but not to the point of being like Wesley Betenkamp.  With Miles more than likely caught up in the vortex known as Maya, here’s to hoping these other two newbies shine a bit.

*SPEAKING OF NEWBIES….We’re supposed to be seeing a new character or two this fall.  It’s always exciting wondering what they can bring to the table.