Degrassi Episode Review: About A Girl

About A Girl is an episode that leaves me all over the place in terms of quality.  The meat of the episode is pretty good because it’s pretty simple: Adam is paranoid that his girlfriend is cheating on him, and instead of asking her about it (because that would be too obvious) he does something stupid.  From there things get weird, as the Tenners’ plot becomes convoluted and Alli’s plot once again goes nowhere, save some humor from Mr. DeLaurier.

ADAM PLOT REVIEW: Trouble strikes in paradise as we see a plot unfold with Adam and Becky for the first time since the season 13 premiere.  Adam isn’t happy when he finds pictures of Becky hanging out with a guy named Todd in Florida.  Adam logs into Becky’s Facerange account and finds a chat log between her and Todd.  Though there’s no incriminating messages, Adam’s still suspicious because Becky never mentions to Todd that she has a boyfriend.

Against Imogen’s advice, Adam decides to log into Becky’s Facerange and impersonate her, sending a message to Todd saying she has a boyfriend and that they shouldn’t hang out anymore.  Adam thinks his plan is clever, but Becky finds out and decides the two need a break so she can think things over.

This plot feels strong because of how simple and straightforward it is.  Adam sees the pictures, freaks out, tries to solve things behind Becky’s back and it instantly backfires like everyone watching expected it to.  It’s like the plot takes a page from the Degrassi Junior High days of making it super obvious that the main character is going to do something stupid, and that you (the viewer) shouldn’t follow suit, making the turmoil feel worthwhile. 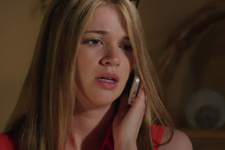 In reference to whether Adam’s actions seemed out of character, it’s hard to answer that with a yes.  Romantic relationships can make even the most normal, laid-back person behave like a complete idiot, something Degrassi loves to remind us time and time again.  It’s understandable that Adam would be freaked out over his girlfriend posting a bunch of pictures of herself with another guy. It’s even understandable that he’d do some investigating to find out what’s going on (I’m not necessarily condoning snooping in someone’s e-mail, etc, I just understand the emotional frenzy that would drive a normal person to do so).  It wouldn’t be Degrassi if characters took the common sense route and actually communicated with each other, and you can chalk up Adam’s “secret” message to Todd as him being too young and dumb to realize such a plan would never work.

Adam’s paranoia feels genuine and it’s played well throughout the episode.  He’s so consumed with it that he nearly loses his job (on a side note, I‘m loving serious Drew), and Jordy portrays Adam’s increasing anger well.  I’ve never had a strong attachment to Beckdam, but their final scene in this episode has been one of their better ones emotionally.  Becky makes fantastic points about how she’s not “trying to be gotten with” when it comes to Todd, and scolds Adam for not being straightforward with her like she was when it came to Imogen.  Becky’s wording clearly suggests that they’re not officially over.  However, given the state he’s in neither is Adam’s emotional distress, which will certainly lead him into deeper water.

MAYA/TRISTAN PLOT REVIEW:  It appears that since we last saw the Tenners in My Own Worst Enemy, Zoë and Miles have been attached at the lips, sucking face every chance they can get.  That leaves Tristan sick to his stomach figuratively and literally, and he and Maya finally share a disdain for Ziles.  Maya plots to “cool off” Zoë and Miles’ hot makeout sessions by dumping a bucket of water on them, but she accidentally dumps it on her teacher instead.  Maya and Tristan are given detention where they must scrub floors, and Maya confronts Miles for leaving Tristan heartbroken.  Tristan witnesses the confrontation and no longer wants to be friends with Maya, because he never wanted Miles to know that he was upset over him.

I generally enjoy Tristan and his sassiness, but in About A Girl he’s borderline obnoxious, acting as if the world had come to an end because Miles chose Zoë as his flavor of the week.  Tristan’s Achilles heel is that he becomes far too emotional when it comes to romance.  After kissing Miles in My Own Worst Enemy he was too busy wandering around in lala land to care that his kiss had never actually been reciprocated (Miles didn’t react negatively, but he also didn’t react to it as if he were glad it happened).  In this episode, Tristan’s behavior is on the extreme opposite end of the spectrum, which in turn made him ending his friendship with Maya seem a bit extreme as well.  Maybe it’s because I’m old, but I saw Maya’s actions as her defending her best friend, not carrying out an agenda of her own (remember, Maya was led to believe that Tristan and Miles‘ kiss was mutual).

Miles and Maya give off the vibe that they like each other in some capacity, but that makes things feel crowded in this Miles mix of Zoë playing tonsil hockey and Tristan walking around butthurt. Even if that wasn’t the intention of the writers, on its own a plot where Maya steps in to exact “justice” for herself or for Tristan feels like it was stretched out to fill this episode.  That’s the downside to Degrassi completely reverting back to primarily 30-minute episodes while maintaining storylines that span over many episodes.  There are bound to be episodes where things feel off because very little seems to be getting accomplished.

ALLI PLOT REVIEW:  I’m running out of words to say how empty and pointless Alli’s plot continues to feel.  This episode‘s plot is basically the same concept from My Own Worst Enemy: there‘s a date, but a kink in plans causes Alli to come up with some scheme that backfires, and ultimately none of it matters because Alli and Leo end the episode on a happy note.  Here in About A Girl, she’s afraid of moving too fast with Leo, who’s invited her for dinner at his place.  She’s worried Leo may want sex, so she brings Jenna and Connor along, telling Leo that Jonnor is “growing apart” and can quote, “benefit from hanging out with a couple as great as us.”  Connor unintentionally blows Alli’s cover, and Alli is forced to actually be honest with Leo and tell him she wants to take things slowly.

Alli’s potential (and Melinda’s talent) continues to be wasted, having Alli “right all of her past relationship wrongs” by taking it slow in a relationship I’m skeptical of to begin with.  Good for her that she’s trying, but the spark that hooks any fan into a ship on this show has been nonexistent with Alli and Leo.  If this were a couple that the show had convinced us to care about in any capacity, Alli‘s cautiousness and Leo‘s compassion would be sweet.  However, when it comes down to it Degrassi is a show that must entertain, and Alli and Leo’s relationship in itself continues to fail at this.  Past experience tells us that something big will probably happen, but the way this plot keeps moving by that point it might be too difficult to care.

Without a doubt, the highlight of the episode (and the only reason to watch Alli’s plot) is clearly Connor’s sex conversation at dinner.  Not only was it hilarious, but it also opened up a level of seriousness when it come’s to Jonnor’s relationship as Jenna responded to Connor’s hatred of even the thought of sex.  We can only hope this the beginning of what would be an interesting topic for Jonnor to explore.