NextDegrassi Promo: I Want It That Way Part 2
Degrassi

Degrassi Episode Review: I Want It That Way 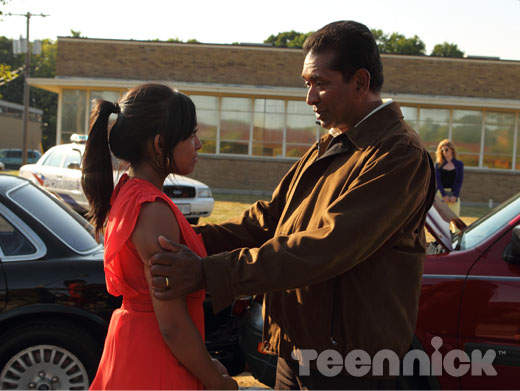 ALLI PLOT SUMMARY:  Because of all of the hard work she’s been putting into school, Alli’s parents decide to get her a car.  This means she, Clare and Eli will easily be able to get to the Jay-Z concert.  Alli wants to take Dave, but he’s still not talking to her after their breakup.  Despite her busy schedule, she promises to not blow him off again and meet him at The Dot for wings.  She arrives late after spending extra time tutoring Cam, and Dave walks out after telling her that he has no time for her if she can’t make time for him.  In walks Dallas, who spends the evening hanging out with Alli instead.  The two have fun by hanging out in a pool together.  Alli talks to him about her workload and he tells her about how he got hooked on pills to keep himself awake because he was so busy.  Dallas spots Alli’s Jay-Z tickets and she gives him one for helping her to finally have fun.  The next day she regrets hanging out the night before because it’s put her behind on her schoolwork…she goes to Dallas to ask him where to get pills that can keep her awake, and he reluctantly tells her.

Alli starts taking the pills, but now she has a new problem:  Clare doesn’t want Dallas to go with them to the concert.  The pills and lack of sleep have her on edge and confrontational as she asks Dallas for the ticket back, but he says no.  Stressed out over the situation and having too much work to do, Alli goes over to Dallas’ place to beg for the ticket back.  The two come up with a better solution:  Dallas will publicly apologize to Clare for everything he’s done to her.  The next day Dallas performs a rap apologizing to Clare, who accepts.  Alli spots Dave sitting in a corner scowling at her, and she goes over to him to yell at him.  Dallas follows behind her and tells Alli that she’s seeing things, and she realizing Dave sitting there was just a hallucination.  Alli promptly throws out the pills and Dallas suggests that she go home and get some solid sleep.  The evening of the concert Alli is still exhausted, but is still determined to have fun anyway.  She drives herself and Dallas to the concert and on the way she falls asleep at the wheel.  When Dallas yells at her she wakes up driving into the path of another car.  She avoids the car by swerving out of the way, but ends up crashing into a parked car.  She and Dallas leave the crash unharmed, and Alli tells her dad what’s happened.  Alli also tells him that she doesn’t think she can handle the workload of fast traking to MIT, and thinks she should come back to Degrassi for her senior year. 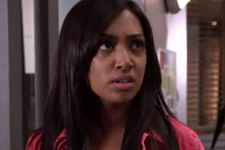 The interesting part about this episode is how this plot and the other two share the common thread of a lack of balance (an old-school Degrassi move if I’ve ever seen one).  It’s not shocking that Bhandurner fizzled out before they could pick up again because nothing has changed.  Alli is still too busy with school, and Dave has no tolerance for feeling like he’s being blown off by her (if you’ve ever had someone who continuously breaks plans, regardless of the reason, you should understand). Even if he was a jerk toward her, it’s easy to see his side of things, as well as Alli’s.  There’s no choosing sides because the issue is simple: the gap in what each one wants out of a relationship (and what each can put into it) at the moment is far too wide for them to work.

I feel like it was a good thing that the “uppers” Alli took didn‘t dominate the episode by the story having Alli go down same old “character gets addicted to pills“ road.  While the pills aided in her meltdown, the focus stays on the episodes strongest point, Alli’s breakdown as she tries to cram too many activities into such little time, and the paranoia that comes with her lack of sleep. 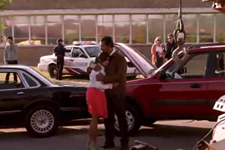 This episode provides solid insight into Alli’s workload.  They make sure it’s overwhelming thinking about how overwhelming her schedule is.  She adds more stress onto her plate as she tries to work out how to solve the Dallas/Clare situation, and tries to force fun into her life when there’s obviously no time for it.  Alli is a character who falls into the trap of never learning from her mistakes, so it’s refreshing to see her do things like not engage Dallas romantically, as well as find an actual solution that works in getting Clare to forgive Dallas.  It was obvious that Alli wouldn’t continue fast tracking to MIT by the end of the episode.  Going to MIT was her dream, not her parents.  It was her choice to take that route, and the fact she realized on her own that she can’t handle it is proof she’s finally maturing.

TRISTAN  PLOT SUMMARY:  Tristan is excited to hear that Eli is creating a zombie film, but Eli questions whether Tristan is physically fit enough to meet the role’s demands.  Tristan takes a yoga class with Maya and Tori, and he’s excited when he realizes his crush Fab is also in the class.  However, Tristan can’t pull off some of the yoga moves because he can’t support his own body weight, and feels embarrassed in front of Fab.  That motivates him to start a week-long cleanse diet, drinking a concoction of water, lemon juice, brown sugar and oil of oregano.  He’s able to lose seven pounds and seven days, and scores a yoga date with Fab.  However, Maya and Tori start worrying about him because cleanse diets can be dangerous.  They force him to eat food and afterward he does an intense workout to burn the calories.  Tristan meets up with Fab to do yoga, and Tristan feels a pain in his chest and passes out.  He finds himself in the hospital after suffering a minor heart attack.  His brother Owen scolds him for crash dieting and offers to help Tristan develop a proper workout plan. 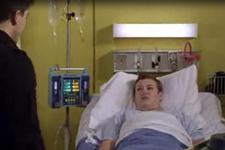 The upside is that I enjoyed them showing that there is no adequate, fast solution to losing weight, and showing how outside factors can alter someone’s mental perception of themselves quickly.  We saw Tristan’s self esteem plummet as his weight posed an issue for him on two separate fronts (Eli’s film and getting Fab’s attention), an aspect of this episode that is thoroughly underrated.  The show, especially in Part 2, kept hammering the idea that a proper diet and exercise plan is the best way to lose and keep weight off.

When the discussion of this plot jumps into eating disorder territory I get confused.  This plot is specifically about crash dieting, but what I’m having a difficult time finding the answer to is when does this kind of behavior fall into the eating disorder category?  Tristan had only been doing the cleanse for a week, but after seeing “how successful” it was he obviously had intentions to continue it before his minor heart attack.  When does one’s mind reach that point of no return, transforming things into a lifelong struggle to manage the symptoms?  Though it wouldn’t be surprising if this was the end of Tristan’s dieting days, there’s still no guarantee that he won’t have issues in the future.  Tristan has proved multiple times on Degrassi that he’s adamant about finding love, and will go to extreme measures to get it.  Even if the length of this plot from beginning to consequences isn’t considered a proper representation of many eating disorders, it’s a thoroughly accurate representation of Tristan (and a lot of people) when it comes to finding a solution for his problems:  he’s all about choosing the quick fix.

FIONA PLOT SUMMARY:  Fiona wants to make a good impression on Imogen’s mom Natalie, but feels like they got off on the wrong foot after telling Natalie about her living with Drew and her mom being under house arrest.  After she learns Natalie doesn’t want Imogen hanging out at her loft anymore, Fiona makes it her mission to become close to Natalie by hanging out with her.  Fiona wants them and Imogen to be one big, happy family, but Imogen isn’t fond of Fiona wanting to spend so much time with Natalie.  Fiona realizes Imogen is jealous because even she doesn’t have a close relationship with Natalie, yet Fiona is trying to.  Fi also realizes that she misses her own mom and plans a trip home, but not before getting Imogen and Natalie together so they can spend time bonding by designing Imogen’s new bedroom.

For some reason this is a weird plot to absorb, and ultimately it’s difficult to care about.  Fiona misses her mom, so she tries to become close with Natalie.  However, it’s like someone forgot to remind Fiona that Imogen doesn’t exactly have the closest of relationships with Natalie either, and Fiona‘s eagerness to bond with her makes Imogen jealous.

The best thing to come out of this is that in the end Fiona is able to bring Imogen and Natalie closer together.  Other than that, this plot does nothing to draw me in or keep me interested in what the trio is doing in the episode.