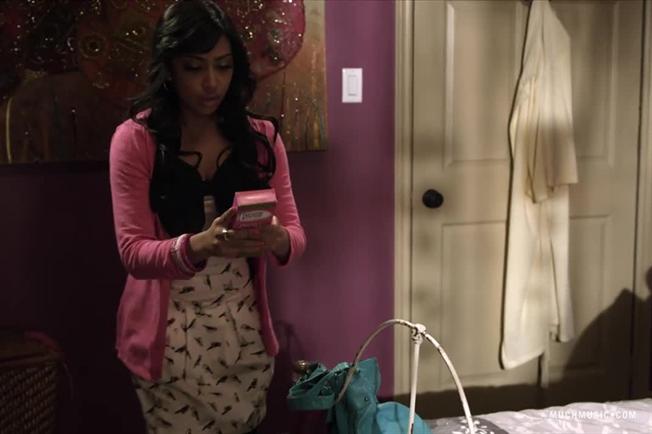 PLOT A SUMMARY:  Alli learns that Simpson submitted her science research to someone at MIT, who is impressed with Alli’s work and wants to meet her.  Alli also finds out that she has enough credits to graduate a year early.  Dave isn’t excited about the possibility of that happening, but Alli assures him there’s a slim chance she’ll actually get in.  Alli meets with the woman from MIT, and is offer a full scholarship as a research student.  Her parents are proud, but Alli isn’t sure if she wants to do it because she’ll be far away from everyone.  Afterward, Alli realizes that she missed a couple of birth control pills, and starts to slowly freak out because she and Dave had unprotected sex.  She buys a pregnancy test, but her mom catches her with it.  Alli says it’s Jenna’s, who reluctantly takes the heat for it.  Alli tells Dave she might be pregnant, and at first he’s shocked yet assumes Alli will no longer be trying to get into MIT.

Alli is convinced she’s pregnant and is frustrated because it‘s too soon for any test to confirm it.  Meanwhile, Dave shares his plan for the future that includes them having the baby, her deferring for a year and then them going to college together.  Alli finally visit’s a health center to get tests done, and Clare is there to support her.  Though Dave wants Alli to keep the baby, Clare reminds Alli that she has multiple options and the decision is hers.  Alli finds out that deferring the offer from MIT isn’t an option, so at the celebration her family throws her she announces that she does indeed plan to go to MIT.  Dave gets upset and lashes out at her because he feels she’s choosing school over him.  The next day Dave apologizes, but Alli tells him that though she hopes they can hang out, her schoolwork and research take priority over their relationship.

I don’t think there was ever a moment (even going back to the first promo where Alli just said the word “pregnant”), where I thought Alli was actually pregnant.  Not every storyline has some deep, hidden meaning, or a fancy twist at the end.  Some storylines, with the use of a tiny bit of logical sense, can be telegraphed from a mile away.

This is one of them.

Degrassi spent Season 10 dealing with Jenna’s pregnancy.  Season 11 was spent dealing with parenting, and eventually adoption.  The only option here would’ve been the option Alli chose: abortion.  Oh what a bind the networks would or wouldn’t be put in if it came down to that.  Like Manny in “Accidents Will Happen,” Alli would’ve been resolute in her decision, but in the end she didn’t have to be.  Regardless of the generic “Degrassi is always doing the same things when it comes to pregnancy” comments, they did something different here.  Emma’s “pregnancy scare” at the end of Season 6 felt too contrived to count for anything.  This plot is obviously setting us up for Alli’s earlier-than-expected departure, but oh how relatable are the feelings of scaring yourself into believing you’re pregnant, or you’re sick, or anything that comes to your health in general.  It’s magnified when you also feel the fate of your entire future is on the line, as it did with Alli.

It seemed Alli was willing to compromise with Dave at some point (depending on how the pregnancy ruling played out), but it never really seemed like she was interested in giving up her opportunity to go to MIT.  Dave acts selfishly here trying to plan out their future and lashing out at Alli after she announces her decision, but it’s the kind of selfish that is oddly understandable.  All he sees is in their future is them being together.  It doesn’t matter what she’d leave for, her going off somewhere means to him that whatever thing she left to do is more important to her than him.

And to be honest, Dave is right.  MIT is more important to Alli than their relationship, and it took the pregnancy scare for her to realize that and fully commit, even at the expense of Bhandurner.  Relationships on Degrassi are notorious for making girls a weak shell of their single selves.  Not this time around; Alli’s learned from her mistakes, and looking beyond the hallways and teen angst of Degrassi.

PLOT B SUMMARY:  The hockey team plans to watch the girls’ dance practice after school, but Cam says he can’t because he has to video chat with his “girlfriend” back home.  Dallas figures out Cam lied, and Cam admits he feels uncomfortable because the team makes fun of him.  Dallas tells him they do it because they like him, and invites Cam to hang with the team at the mall so he can show them who he really is.  Things are going well until Dallas challenges Cam to go talk to Bianca.  He stumbles over his words and embarrasses himself by asking Bianca for sex, to which she responds by throwing a drink in his face.

It’s game day and Cam is feeling anxious.  After Mo makes a comment about Cam’s clover underwear, Maya comes to Cam’s defense, but Cam suddenly snaps at her.  Cam splashes his face with water in the washroom, but realizes he’s in the ladies’ room when Bianca walks in.  In tears, Cam apologizes to Bianca and tells her that he feels alone and his family is far away.  Bianca tells Cam to not listen to what the hockey guys say and hang out with people who don’t suck.  Dallas and the guys tell Cam to sit with them in the back on the way to the game, but he chooses to sit up front by himself.  The team wins with the help of Cam scoring and at the post-game meal Maya walks into the restaurant.  Cam apologizes for yelling at her and asks her to hang out sometime, and she agrees. 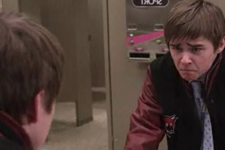 Cam’s plot led to a hilarious moment where in an awkward conversation with Bianca, he asks her for sex.  I still laugh every time I think about that moment, but the bigger picture of Cam’s dilemma is no joke, even if the hockey team thinks it is.

The hockey team has been established as a group that is constantly joking around with each other.  I love how this plot addresses that teasing can be just as hurtful when it comes from within your own social group, as it would be if a stranger were doing it.  It also shows how you can feel alone, even if you belong to a social group.  Cam is awkward and does not fit into the stereotypical “jock” mold that the rest of the hockey boys do.  The fact that he’s brought up multiple times that he’s far away from his family shows us an interesting look at the anxiety that plagues him.  It becomes abundantly clear how different he is from the rest of them when he responds to Dallas wanting him to go with the team to the mall to pick up girls by saying, “Well that’s night before a game.”

Dallas talks about how talented Cam is, but that Cam is “wasting it,” and while we know he’s talking about using his athlete status to get girls, Cam has no idea what that means.  Cam is the male version of Maya, and we’re watching a couple of young, inexperienced characters enter a new realm where they will start figuring themselves out.  Cam and Maya doing that together seems quite charming and appropriate.

PLOT C SUMMARY:  While everyone is working on their university applications, Jake reveals that he has no plans for school; instead, he wants to work for his dad’s business right out of high school.  Jake is adamant about Martin Construction going green, but Glen wants Jake to focus on school instead.  At school Jake witnesses Luke throwing an aluminum can in a regular trashcan and confronts him about it.  The two get into a fight and end up in detention.  Jake is frustrated because he can’t get his dad to listen to him about his ideas for going green, so Katie tells Jake they should show his dad he knows what he’s doing by working on a project at Degrassi.  They come up with the idea to build a garden on the roof, which Principal Simpson approves.  However, things are rough when water starts spraying uncontrollably from the valves and Jake can’t stop it.  He eventually has to give in and call his dad to fix it.  Glen doesn’t want Jake to be in the construction business forever, but Jake tells him that’s exactly what he wants to do.  Glen just wants Jake to keep his options open, so he tells Jake they can test out some of his environmentally friendly ideas if he also applies to university. 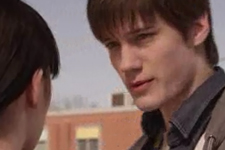 The gist of Jake’s plot is simple:  he doesn’t want to go to college.  He wants to team up with his dad and do construction for the rest of his life, but Glen wants Jake to keep his options open.  However, the entire premise of Jake suddenly channeling his inner Emma Nelson seemed a silly route to get the point across.

Everything about it seemed to be a random mash of ideas thrown together.  Hey, let’s make Jake environmentally conscious to the point where he gets violently angry with a complete stranger (Luke).  Then let’s have Jake randomly try and build a garden on top of the roof of Degrassi, while a black-haired Katie tags along for the green ride.  The only thing missing is Jake and Katie wearing matching “Captain Planet & the Planeteers” vintage t-shirts.  While Jake does show that he is very intelligent and is passionate about construction, that point gets drowned under a soggy roof of mediocrity.

How do YOU grade Say It Ain’t So?

You will be able to grade the plots in this episode by voting below.