Degrassi Episode Review: Smash Into You

PLOT A SUMMARY: Dave is desperate to get Alli back, who wants nothing to do with him.  Dave joins the Model UN and surprises Alli by setting everything up.  She agrees to finally talk with Dave, which leads to them making out and getting back together.  Meanwhile, Dave’s former summer fling Jacinta is constantly texting him, wanting to get back together.  He blocks her on all social media sites, and when she calls him, Dave tells her to never call him again.  Dave and Alli greet all of the students from other schools who arrive at Degrassi for the Model UN, and Dave comes face to face with Jacinta again.

Jacinta confronts Dave in front of Alli during the Model UN, and Dave is forced to tell Alli about him and Jacinta hooking up.  He tells Alli that Jacinta is stalking him everything will be ok, but that still doesn’t ease Alli’s fears.  Dave secretly talks to Jacinta and invites her to meet up outside, and they go for a drive.  She thinks they’re getting back together, but Dave tells her he’s driving her to the train station to get her away from him and Alli.  Jacinta doesn’t understand what she did to cause Dave to stop talking to her, and he says them hooking up was a mistake.  She grabs Dave’s phone and jumps out of the car at a stoplight, running off to send Alli breakup messages (which Alli freaks out over back at the Model UN).  Dave catches up with Jacinta, and as they continue to argue Jacinta walks into traffic without looking and gets hit by a car.  Dave returns to Degrassi, where Alli is waiting to chew him out.  Dave tells her about the accident, and though Alli tries to comfort him, Dave still feels guilty because the doctors don’t know if Jacinta will ever walk again. 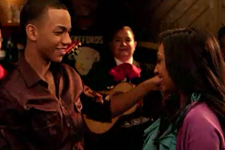 In response to an angry fan, Stephen Stohn once said “Sometimes things unfold in ways that don’t make sense. sometimes they makes sense in a while…sometimes they don’t…”

That quote stayed in the back of my mind as I watched this episode.  It reminded me of how annoyed everyone was after Nowhere To Run, where Bhandurner officially derailed itself in less than sixty seconds with a revelation that was out of character for Dave.

Dave’s infidelity will never really make much sense, but how much does that matter when it opened up the possibility for such an emotional storyline?  It becomes one of those moments that one must eventually accept and/or overlook, because it’s only the means to an end (aka this episode). 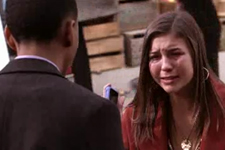 I loved this Bhandurner reunion.  Not simply because I’m a Bhandurner fan, but because a couple hastily reunited out of familiarity, yet their unresolved issues weren’t swept underneath the rug.  Rooting for Dave was easy because he was genuinely sorry for hurting Alli, but Alli’s fears given her past were completely understandable…gotta love the extra effort Degrassi took to make Alli’s worries clear by her verbalizing every romantic failure she’s dealt with.  At first Jacinta comes off as a crazy stalker, with Dave labeling her as such helping to shape our notion of her.  But Dave and Jacinta’s conversation in the car hit’s an emotional chord, despite how stalkerish her behavior seemed.  Dave slept with her, then dropped her without an explanation.  She became emotionally attached, so she didn’t understand what she’d done wrong or why she wasn’t good enough.  That’s a question many wish they knew the answer to in their own failed relationships…people fear the idea of not having proper closure.

As far as Dave texting and driving?  I don’t feel like it’s a cop out that he didn’t crash his car or get injured.  This might be a bold thing to say, but it would’ve felt very cliché if Degrassi had gone down that route.  We would’ve seen it coming from a mile away given that from the opening scene of the episode until the accident Degrassi  was practically holding up a giant neon sign saying “DON’T TEXT AND DRIVE.”

Instead, we get a curveball.  I went into this episode blind.  I watched both parts on the same night, and didn’t watch any of the promos for it.  Jacinta getting hit by a car came out of left field.  Nothing else needs to be said about Jahmil French’s performance other than it was phenomenal, from navigating the treacherous waters of Alli’s emotions with Jacinta in the picture to feeling as if he’s responsible for potentially ruining someone’s life.  It’s ironic that Dave didn’t feel guilty about hurting Jacinta emotionally until she got hurt physically.  The accident became a parallel to their fling’s demise, only this time the aftermath unfolded before Dave’s very eyes.  It’s also ironic that with the status of Jacinta’s health currently unknown, we’re now the ones hoping for some type of closure.

PLOT B SUMMARY:  Katie’s recovering from knee surgery, which means Marisol will have to find a new partner for the Model UN.  Mr. Perino assigns Mo to be her partner, which she reluctantly accepts.  Mo and Marisol get into an argument over the Model UN issue, which leads Mo to stick gum in Marisol’s hair.  Katie and Drew think that Mo might have a crush on Marisol, who isn’t interested in Mo because of his weight.  She plans to tell Mo that she’s not interested, but when she finds him he’s in the middle of taking her Model UN solution of having a benefit concert and expanding on it by creating a song to go along with it.  Marisol starts to develop a crush on Mo, but she’s hurt and storms off when she finds out he doesn‘t feel the same way.  Later, Mo tells her he’s never had feelings for her because he felt she was out of his league, and the two share a kiss. 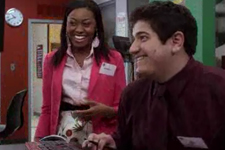 There are parts of this Mo/Marisol storyline that I liked and disliked.  I applaud the show for going to some length to actually establish chemistry between two characters, but when it comes down to it their pairing still felt kind of random. We finally get to see beyond the shallow exterior of Marisol, but the scene where the “light bulb” goes off in her head and she suddenly has feelings for Mo made me roll my eyes.  But then two seconds later when Mo rejects her instead of it being the other way around that’s fantastic.  They’re not a couple I dislike, but Mo and Marisol’s quick start didn’t really draw me in either.  For me, they’re a couple that could go either way in the future.

PLOT C SUMMARY:  Adam finds a love note in his book bag, but tears it up because he thinks it’s a prank.  One of his fears is skateboarding, so he hits up Degrassi’s skate park after school, where he’s approached by Tori.  She asks him a bunch of questions about relationships, which leads him to believe she might be his secret admirer despite dating Zig.  Adam keeps an eye on his locker from afar and catches Tori putting a note in his locker.  She tells him her friend has a crush on him, and Adam agrees to go on a double date with Tori, Zig and her friend.  Adam shows up to the date to find out his secret admirer is Tristan.  Tori assumed that Adam’s LGBT pin meant that he was gay, but he informs them that he’s transgender.  Tristan feels embarrassed, but Adam share’s his past dating disasters and encourages Tristan to keep trying. 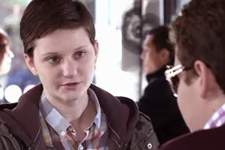 Reading the episode description for the this plot basically gave it away, and the mentality was “Why are they always screwing over Adam’s love life?”

Watching the plot elicited a different response.  Out of Adam and Tristan’s romantic gaffe came a great conversation between two of the shows LGBT characters.  It was wonderful watching Adam pass on what he’s learned to Tristan.  Normally shows put a lot of work into portraying LGBT issues correctly, but they flipped the switch to show how people can make honest mistakes (Tori assuming Adam was a gay guy, and Zig not knowing what the “T” in LGBT stands for) without it being a storyline involving malicious behavior.  And Adam gets a boost of confidence realizing that not everyone immediately views him as “the transgender kid” or “that girl who’s now a guy.”

P.S.  Thank you Degrassi for mention the Owen connection!

How Do YOU Grade Smash Into You?

Voting is now open!  Vote below to grade the plots in the episode: